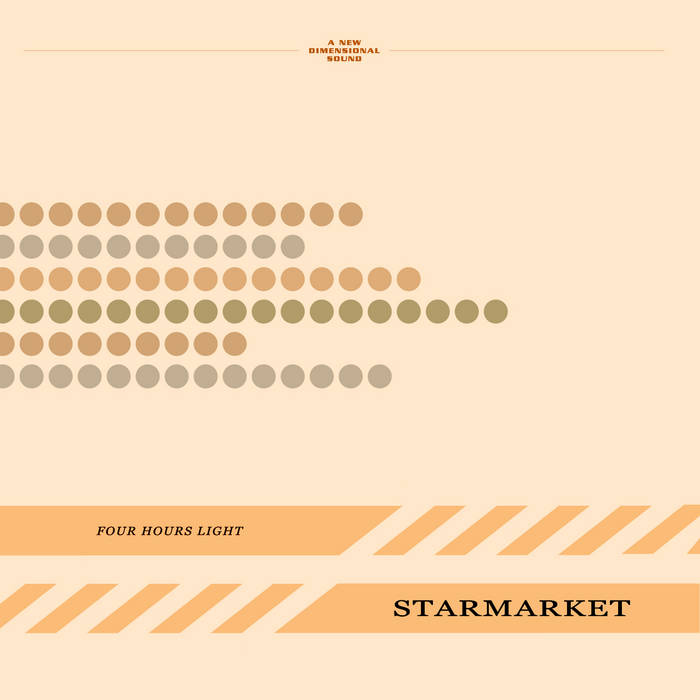 nah it was awesome to listen on japan tour... Favorite track: Coming From The Cold.

Remarkable songwriting, effortless lyrics and exceptional production by Fireside's Pelle Gunnerfeldt create a new dimensional sound for the listener - a virtual rock symphony for the ages. Four Hours Light ever so subtly creeps its way into the deepest, darkest corners of the mind and firmly embeds itself. If there ever was a record about girls and boys breaking up, this is it. A more melancholy variation on the aggressive guitar sound Starmarket is known for, this record becomes a sort of soundtrack to your life...trust us on this one. Without a doubt, the biggest moment in the band's history. (DER-388)

"As Sweden's pre-eminent guitar band, Starmarket have created a brilliant exercise in layered, melodic rock with Four Hours Light, their second US release. Starmarket delivers several break-up songs, including 'Drive By' and 'Black Sea.' The latter best demonstrates Fredrik Brandstrom's pensive tenor via lyrics like 'I think you killed me long ago. There's a deep black sea, somewhere deep inside of me.' The dynamic 'Without No I' is built from a wall of guitars, while 'Count With Fractions' is a forceful, string-bending workout. Lush pop doesn't get much better than 'Into Your Arms' or the shimmering emotion of 'Coming From The Cold.' And talk about potential hits, Starmarket's got 'em, even though one senses the band strives toward art over commerce. 'A Million Words' may be the independent pop song of the year, with 'Baby's Coming Back' and 'Don't Leave Me This Way' trailing close behind. Starmarket also exemplifies an unexpected courageousness as evidenced by the sadly stellar, jazz-tinged, 'When The Light In My Heart Is Out' and the downbeat, mellotron touched 'Midnight Caller.' Despite their roots in hardcore, Brandstrom and Company have branched out considerably, serving as a testament to their instrumental abilities. To be succinct, Four Hours Light is a vastly produced, exceptionally performed album. Buy this one and tell your friends." - Music.com

"On 'Four Hours Light' the sound that Starmarket brings is one of diversity. The first song 'Into Your Arms' starts off catchy as hell with a really wonderful piano part that makes me smile and later on they throw in a funk guitar part. Amazing. Actually, the most wonderful thing is that the diversity continues through the whole album. Unlike so many bands out there trying to showcase their entire taste in music on one album, Starmarket can pull it off. From the hard rock sound of 'Count With Fractions' to the steel-pedaled guitar on 'A Million Words' to the beautiful piano finale 'Tonight' it all fits together like I've only wished my life could." - Action Attack Helicopter

"If there was any doubt Starmarket is the best band in Sweden, this unquestionably proves they are. Combining melody, harmony and intensity like no other band...so aurally satisfying...quite frankly, there's nothing negative to say." - Beacon

"The Starmarket sound is definitely unique...the little rock symphony that grows on you. Patrik Bergman and Fredrik Brandstrom possess some very soulful voices and I think that's what really drives this album. There's a lot of passion in their deliverance of lyrics. Starmarket does a good job at making the relationship topic seem fresh, not only with the strong vocals, but the atmosphere created by their instruments. A good example here is the song "When the Light in My Heart is Out," a song with beautiful piano melodies overlapping a moody electronic sounding backdrop. Very endearing, indeed. It seems to be the strongest song on the disc and is definitely worth a repeat listen. Four Hours Light is surprisingly infectious." - Jagged