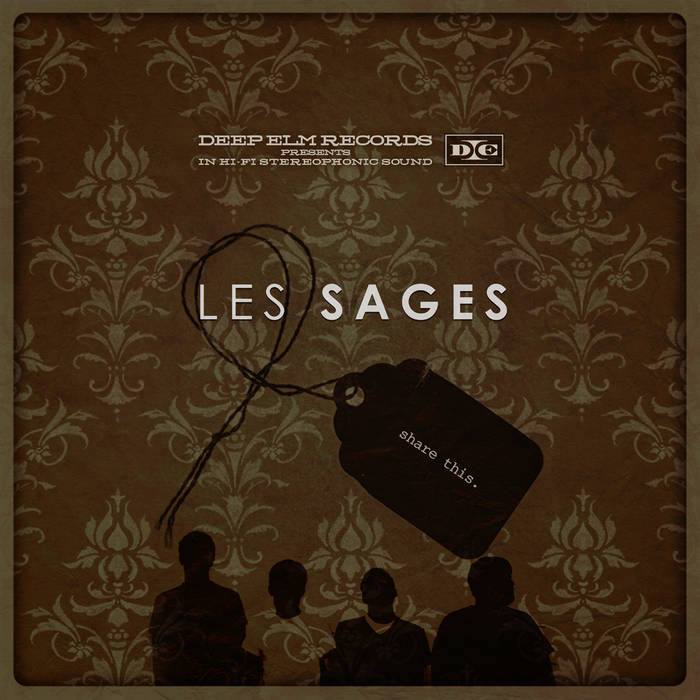 "I fell in love with the mayor's daughter...and she fell in love with me" sings Les Sages (pronounced "Lay-Sahj") on their new album Share This. Ahhh, if life were only that simple. Fortunately for this incredibly talented band of four brothers, songwriting is. Listen to any track on this album - any one - and stop there. You won't, you can't...it's just that good. Whether their message is about rethinking boundaries (The League War), sacrificing for a better future (The Soldier's Mark), being a true friend (Friends), proving that love can last infinitely (Nomads) or taking action (Red Lights), Les Sages' theme of positivity and self-exploration rings clear. And while other bands use studio tricks to produce gorgeous harmonies, counterpoints and melodies like those you'll hear on Share This, Les Sages does it authentically with a combination of four separate, sincere voices and poetic yet biting lyrics. "Our songs have a deep socio-moral message. Through our music and lyrics, we'd like to be like a best friend to all those who listen" says Kris Larson. "The title of the album is meant to enlist each and every listener to help in spreading our message. This record is all about finding real happiness. It's about following your dreams, taking chances and making sacrifices to make this world a better place. A lofty goal? Yes, but worthy. Are we gonna do it? We'll die trying" adds Joe Larson. Destined to be one of the most memorable records ever released on Deep Elm, if this album doesn't speak to you, none will. (DER-503)

"Deep Elm Records has done it once again, discovering four brothers called Les Sages. I put their new album 'Share This' is in a group of periodically published super albums, because albums like this are not released that frequently. It's so impressive that I would even say Jimmy Eat World's 'Clarity' could stand in it's shadow. It's very reminiscient of that special feeling I got when I first heard Jimmy Eat World and /or Taking Back Sunday. Les Sages is our Featured Artist until further notice." - Punk76

"The nice thing with Deep Elm is that all the albums they release can be bought with your eyes closed. We know of course the quality of the label's roster, but with each new group they sign, we know that we will discover something unique. When I saw the label that was associated with this group, I immediately listened. I was completely captivated by these 11 aggressive yet fragile indie-pop songs. It's very simple, since I started playing Share This it's never left my turntable. Their sound has a "je ne sais quoi" new feeling to it. In fact, if Taking Back Sunday slowed the tempo to some Brand New's songs that were arranged by Death Cab for Cutie and Say Anything, and the whole lot was shaken for forty minutes, it would produce the best kept secrets of Les Sages. The League War and Friends completes with the best of Brand New with such amazing melodies. But the main force that makes all the difference is the voices. All group members sing, and the combination of those four vocals give a magical effect to every song. Reinvention and Mumbled are the perfect example. With almost post-rock crystalline guitars and piano, it is breathtaking beauty. In fact, everything that the group touches turns to gold. Nomads competes with the best of Death Cab and the chorus rivals the legendary Jimmy Eat World. The big rock Red Lights and Driver Of the Hearse might have found their place on a Say Anything album. The use of the piano is always wise and never pompous, providing the emotion and space. Action, the bluesy Tricks and above all The Soldier's Mark are all mastered to perfection and will affect anyone with a heart. The Soldier's Mark is the finest song of the album, the lyrics vibrate with melody and transport you elsewhere. It's impossible not to be shocked after hearing Share This, especially for a group that I didn't know about a week ago. A no-fault album of indie-pop the likes of which we have not heard of for a long time. No gimmicks, no posing...just four humble brothers in the service of music. I'm sure they're not even aware they have just released an album that can compete successfully with the very best." - Alternativ News