Woke Up Early The Day I Died 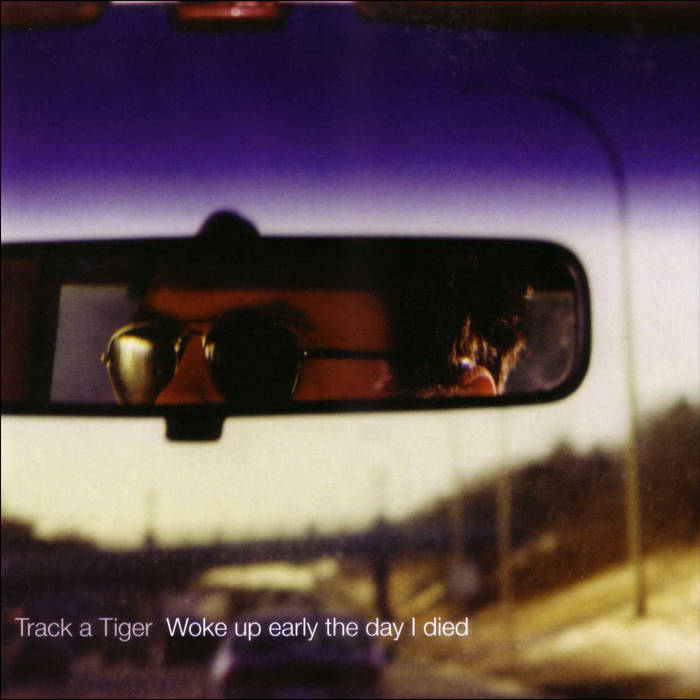 Track A Tiger's debut full-length Woke Up Early The Day I Died (2006) has been re-released worldwide on Deep Elm. Their latest album is titled I Felt The Bullet Hit My Heart. Their second full-length is titled We Moved Like Ghosts (2007) and can also be found on Deep Elm.

The sound? Moody. Lots of male-female harmonies. A little rock, but mostly slow, sad, sleepy late nights. Think Richard and Linda Thompson and the Sea and Cake having drinks in the living room while Low and Sonic Youth make dinner in the kitchen...while Fleetwood Mac is out getting more ice. Recorded over the course of three years, slowly built upon original guitar and voice tracks that songwriter Jim Vallet recorded in his Chicago apartment's living room (listen close for a cat, squeaky wood floors and occasional late night drunken lover's quarrel on the street below), Woke Up Early The Day I Died has the feel of a much-overdubbed indie recording to suit the somewhat depressive vibe of Vallet's lyrics and his low-key melodies. The album compares favorably to contemporaries ranging from Low (especially on the hushed, hypnotic "Here at the End") through Architecture in Helsinki to Broken Social Scene. A particular highlight is the propulsive "Happy," which has a jangle-edged nervous tension akin to the New Zealand indie bands of the '80s. (DER-486)

"There's a good reason that Track A Tiger is getting lots of love in the music world. Theirs is a mature music. No, not music for old people but well-aged music. Like a fine wine...a '97 Brunello of the indie music world. Music that must've gestated for a while before finally being recorded and sent out for the public to enjoy. Music that resides somewhere in the musical intersection of Low and Belle and Sebastian. Music that I really am enjoying right about now. Music that makes me start every sentence with the word music. Music is as music does. Music music music, thank heavens for music like this!" - Ear Farm

"Do not listen to this album if, indeed, you need to wake up early. Because you'll just lay there, drowsy, floating back to sleep on a sea of acoustic guitar, cello, and the occasional "blips and bleeps." Not to mention a host of female vocalists taking turns accompaying Jim Vallet. This is the perfect pick for moping around and staring at the ceiling: "I've taken hold of your misery." Pour a drink and sulk to the lazy alt-country/folk of Track A Tiger." - 75 Or Less

"I heard Track a Tiger on Daytrotter about a month ago and I've been listening to them pretty much ever since. It's strange how even with all the accourtrements that are so specific to the Daytrotter sessions, they still seem to capture the very essence of a band. I'm immediately reminded of two great Americana bands, Hem and the late, great eastmountainsouth. The smokey texture of the sound is quite similar to the effortless grace of Hem's Sally Ellyson, and the beautiful interplay of male-female harmonies is as spot on as it was for eastmountainsouth. The songs are mostly slow, melancholy affairs, more dust than bright lights. The song starts with a teensy bit of a synth, some bleeps and soft guitar, and with a gentle build, it gets down to business. The cello is heard quietly in the background and the vocals join us at the front of the room. Like a warm draft when it's bitter cold, maybe that warmth when you first open the door in January. That flush to the cheek and the coziness even before you put your slippers on. Track a Tiger feel like a warm house on a cold day, the perfect soundtrack to an Ohio snowstorm, the perfect tunes for a day in and looking out. With only a smattering of vocals, it's good that the steady and smooth instruments are able to carry this song through it's four minute lifespan. When the track is over, all you can think of what it was like when it was on, and you just hit repeat, and you get to relive that first, enveloping feeling of warmth, that sense of home." - Tha Bomb Shelter