We've Built Up To Nothing 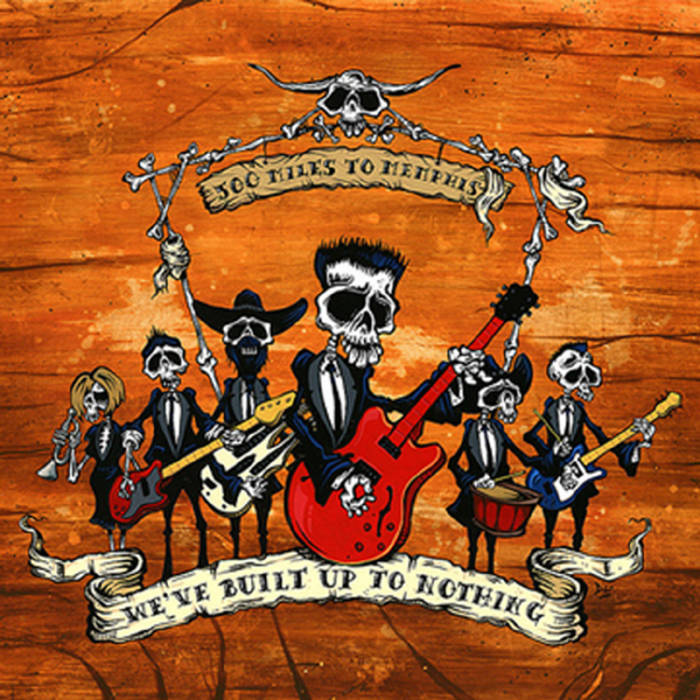 Lead by playfully angry and charismatic frontman, Ryan Malott, 500 MILES TO MEMPHIS has received international praise for their ability to satisfy the musical hunger of fans in both country and alternative / punk genres. Right out of the gate, fans will hear dramatic differences from the previous album Sunshine In A Shotglass. 500 Miles To Memphis has re-invented themselves without compromising the blood, sweat, and tears from previous releases, creating an album that's nothing short of riveting. We've Built Up to Nothing has cut after cut of instantly memorable hooks, screaming guitars, Beatles-inspired harmonies, and even a full orchestra. Produced by platinum award-winning producer Erwin Musper (Scorpions, Van Halen, Def Leppard, David Bowie, Mick Jagger). Named after the distance from the band's hometown of Cincinnati to Graceland, 500 Miles To Memphis have been reviewed internationally as: "rowdy, insanely catchy", "heartbreaking", "inspiring", and "whiskey-soaked in bittersweet lament." Slather on an infectious melody, some bright, brash guitars and a touch of bluegrass fiddle and suddenly tracks about cocaine-addicted friends and coma victims praying for sweet death ring out like the perfect, invigorating remedy for the honky-tonk blues. This band is comfortable in almost any setting, largely because their music -- a mix of scrappy country and scorching Rock N Roll -- has a magnetic, wide appeal. (DER-525)

"500 Miles to Memphis' last album Sunshine in a Shot Glass was a wild country-punk album dedicated to what seemed to be the nastiest break-up ever. Lead singer Ryan Malott, in his attempts to improve in all aspects upon the last album, went out and had another friggin' breakup (or, God forbid, it's the same breakup still happening) that seems even more brutal than the last. Thus, we have We've Built Up To Nothing. I feel straight-up awful for Ryan Malott if these tunes are all autobiographical, but I'm thankful that he's so good at getting his angst down on tape. If the first one was a great break-up album, this is an epic breakup album. Where Sunshine in a Shot Glass reveled in the country/punk dichotomy, We've Built Up sees it as a fact of life and gets on with writing great songs. This allows the band to expand its sound out in great ways, like the Avett Brothers-esque piano-country-punk of Let it Go, instrumental interludes Intro and Dejas, the nine-minute-long kiss-off Everybody Needs an Enemy, and the 3-minutes-exactly adrenaline blast that is Shots. There are marching bands, strings, organs, pianos, banjos, and more. The title track closes out the album with a tuba-led strings and brass orchestra, and Malott pulls off the guitar-less song with such slick expertise you'd think he's been doing it forever. Some parts he has been doing forever. There are two-steppin' country-punk songs like the frantic It's Alright and East Texas Angel that have nothing distinctive in them but Malott's trademark vocals, solid melodies, and a punk strum. And that's enough to turn out a great song all on its own. But it's experiments like the relatively mellow, heart-rending You Loved Me Once and the organ-soaked romance of Moonlight have little to do with punk and more to do with emotion-tugging country and pop which make this album so infectious. This isn't just a rage-tastic break-up middle finger in musical form. This is a thoughtful evaluation of all the emotions that come along with a breakup, as filtered through Ryan Malott's singer/songwriter idiom. As a result, the tempos, styles and sounds of the album are incredibly varied. I mean, Moonlight could be on country radio right now and no one would know that 500 Miles to Memphis is mostly a punk band. And that's awesome. If you've gotten your heart broken, We've Built Up To Nothing is a therapy session and a half. If you like country-punk, these guys are the reigning kings. If you like adrenaline-fueled punk albums, you'll still like this album. And, amazingly, if you like hot country, you'll find treats for your ears here. 500 Miles to Memphis has pushed their sound out to new areas and conquered them thoroughly. An amazing release. P.S. Someone love Ryan Malott. Please." - Independent Clauses

"One of my absolute favorite albums of a couple years ago is the incredible Sunshine In A Shotglass from Cincinnati's 500 Miles To Memphis. That album is overflowing with (quite possibly) the best and most energetic merging of country and punk rock I've ever heard. Even 500MTM singer Ryan Mallot's EP with Kelly Thomas from last year is amazing. Where Sunshine In A Shotglass is instantly infectious and remains so throughout, We've Built Up To Nothing is a bit less pop punk and bit more barroom country rock with plenty of hooks. More than solid from front to back, this is a really good album. Frontman Ryan Mallot's vocals are again front and center and rightfully so. I just love this guy's voice and the slight whine and twang it has. Overall, there's a slower and more somber tonality to this album than their last one. There's less urgency but no less passion, perhaps you might call that maturity. One of the reasons I love 500MTM is that it still gets me when I hear a hardcore-style half-time breakdown in what is essentially a country song. There's even a riff in the middle of It's Alright that could pass as something from The Shape Of Punk To Come. It all just makes me smile. Another new element that the band employs more of on We've Built Up To Nothing is the ample use of a brass section on tracks like Dejas and the title track giving them an almost Southwestern flavor. If 500 Miles To Memphis keeps making records like this one I've got no problems with that." - Can You See The Sunset