by Again For The Win 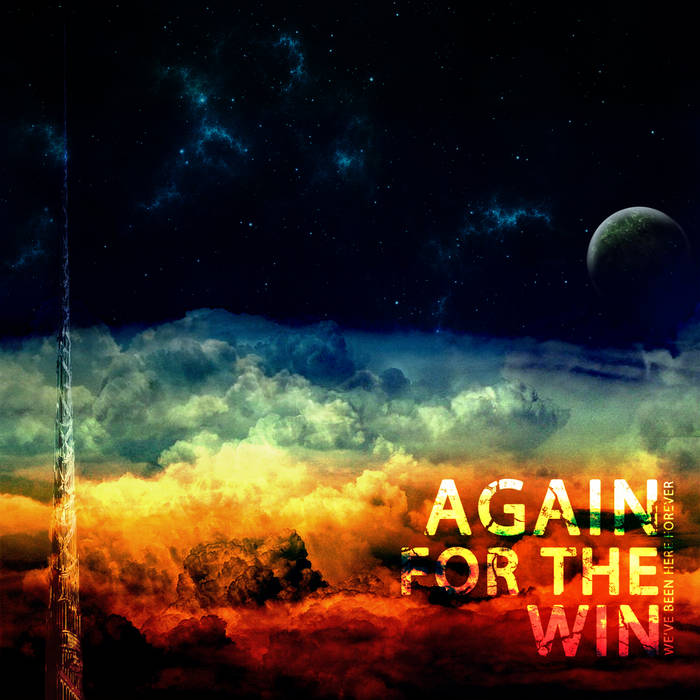 With hearts on sleeve, AGAIN FOR THE WIN explores moments of both personal and collective triumph as well as defeat on their sophomore effort We've Been Here Forever. Boasting impassioned declarations of independence right alongside pleas for companionship, this isn't an album full of happy tunes...and at times it's melancholy and cynical. But like life itself, it is hopeful and truly inspiring. It's not simply a collection of songs, but a loud and often urgent record that isn't afraid to step down, stand close and whisper directly to you. One moment it exposes the kind of secrets that only close friends share, then charges the front lines into an unexpected battle the next. You'll discover many layers to digest in the trenches below the definitive pulse that guides this confident and varied undertaking. Between the killer guitars, tightly locked rhythm section, inventive keys and strong lyrical passages, you'll hear something different nestled away with every listen. By breaking convention and not pulling any punches, the band displays an unabashed sense of individualism, uncategorizing themselves in the best way possible. If AGAIN FOR THE WIN's goal was to make a record about striving for something better for yourself as well as the people around you, the band has truly accomplished what they set out to do.

"We felt a few different turning points while writing this album. Everyone in the band lost close family members as well as close friends during the twelve months we were writing and recording. It truly shaped our entire creative process. But once we wrote Merkabah, the entire album started coming together quickly and everything seemed to fall into place. Once we admitted to ourselves that we were writing a record with very heavy personal themes, we chose to embrace it. We had a lot of important and specific things to say and we wanted to make sure to say them correctly. We wanted to wear our hearts on our sleeves and make a record that felt like home to us" says lead singer Carter Francis. "We named the album halfway through the writing process. Once it was decided, we took a step back and looked at the scope of topics we were discussing. The title gave us a sense of new-found confidence and made us unafraid to embrace making a specific and bold record. In the end I think the record is an all-inclusive and open invitation for people to be passionate about what they love and talk about what might otherwise go unsaid" says guitarist Bobby Martinez. Drummer Travis Malone continues "We've been inspired by every band before us that we saw play in a little barn or park gazebo in our hometown music scene. You rarely see passion like that anymore...a couple of dudes sweating like mad and putting every ounce of their being while performing for twenty kids in a basement. We remember how much those shows meant to us while we were growing up and have always thought that if we can inspire someone like those bands inspired us, then mission complete."

AGAIN FOR THE WIN is Carter Francis (vocals, guitars), Wayne Zingery (rhodes, synths, pianos, programming), Travis Malone (drums), Bobby Martinez (guitars, vocals) and Greg Dubinovskiy (bass). We've Been Here Forever was produced by Again For The Win and recorded, engineered, mixed and mastered at Shine Studios in Austin, TX (Simple Plan, Celine Dion, Cirque du Soleil) with engineer Justin Douglas in March 2012. In connection with the new album, Deep Elm will simultaneously re-release the band's nine track debut Bonus Deluxe Version worldwide. The band will appear with an exclusive, unreleased track on the forthcoming Chapter 13 of The Emo Diaries compilation series. AGAIN FOR THE WIN resides in Austin, Texas...capital of the Lone Star State, the self-proclaimed Live Music Capital of the World, the epicenter of the SXSW Music Festival and home to some of the best damn barbecue you've ever tasted.

“Combining the sound of 90's emo, piano rock and punk, Again For The Win is one of the prides of Austin, Texas. Their unique sound has brought them plenty of acclaim from those lucky enough to witness Carter Francis' powerful vocals and the rest of the band's immense musical talent." - Muzik Dizcovery

Written and Produced by Again For The Win
Recorded at Shine Studios, Austin, TX
Engineered, Mixed and Mastered by Justin Douglas