We Were Always Loyal To Lost Causes

by The Dandelion War 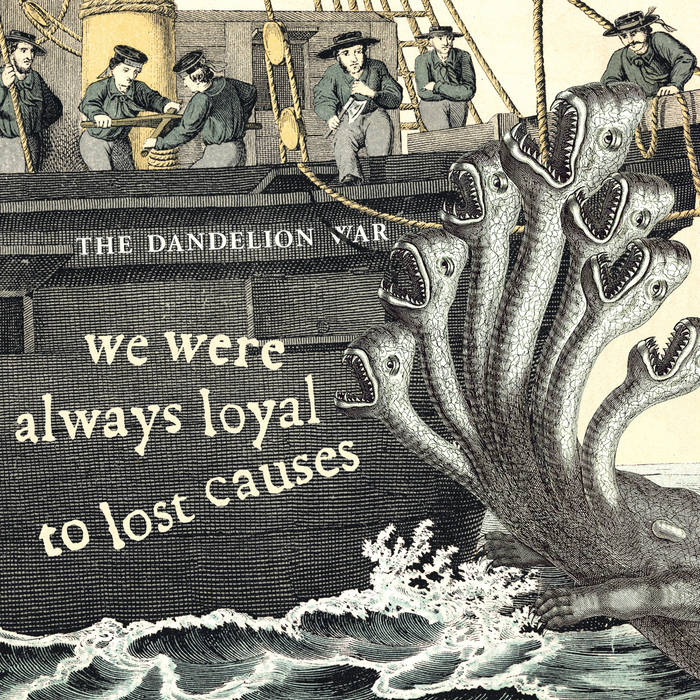 Michael Reilly A grand album of textured melodies and beautiful percussion. There's a slow simplicity to many of the tracks here, with each finding a remarkable depth of feeling within their relaxed and unhurried atmospherics. Favorite track: A Different Heav'n.

Dougie This album is a grower, every time I listen to it I find myself loving it more each time. Favorite track: The Wanderers and Their Shadows.

Ambient post-rockers The Dandelion War from Oakland, California have returned with a stunning batch of lavish, atmospheric songs on their sophomore album We Were Always Loyal To Lost Causes. The quintet has broadened their sound, drenching reverb-laden guitars and vocals with bright electronic elements and textures. Album opener Strange Ghosts makes quite a statement, reaching its pinnacle with a barrage of synthesized strings and flourishing Jonsi-esque vocals. However, the band doesn't entirely abandon the traditional approach of building quiet textures into cascades of awesome noise. Drifters is perfect example: beginning with a vibraphone and a voice, the song crescendos into a potent and melodic soundscape of guitars, bass, drums and xylophone. The album also has its more introspective moments: A Different Heav'n and Bloom skip the post-rock dynamic shifting and focus on melody and texture instead. The guitars drone, building a lush foundation for the gorgeous vocals and synth melodies. Overall, The Dandelion War has taken the best of post-rock, ambient indie and shoegaze and created something new that simply captures your attention. For people who enjoy atmospheric music that washes over you, We Were Always Loyal To Lost Causes is 55 minutes of bliss...best enjoyed in one long listening session with the volume turned up loud.

"We chose our name based on the obvious extremes...which seemed appropriate for a band that relies so much on contrasting dynamics. There was a time when we considered changing it, but we never found anything we liked better. The phrase was taken from the title of a book by World War II veteran and Oxford graduate Richard Rosenthal. Someday, we'll reach out to Mr. Rosenthal to let him know we exist" says vocalist Larry Fernandez. He continues, "Making this album was a long, slow process. We intentionally went into the studio with unanswered questions about some of the songs. We wanted to experiment with new types of sounds, non-traditional instruments and percussion. We tried things that totally failed and, every now and then, we tried something that was a homerun. The songs tend to be a little slower and quieter than those on our debut Geometries And Orchids, but they show a lot more subtlety, relying on melody, lyrics and instrumentation to convey an emotion. As for the lyrics, they tend to be about challenging situations. The title of the album is a line from Joyce's Ulysses. Showing loyalty to a lost cause means having commitment in the face of hopelessness. On one level, that's sort of a downer, but we also see something redeeming about remaining committed to a lost cause." Guitarist Jeff Kay continues, "Our sound grew out of a common interest in post rock. We love long, epic compositions and huge dynamic swings between ultra quiet and super loud. But by adding vocals and electronics, we've moved away from post rock in a traditional sense. And we don't hide from the fact that we fit into a couple specific genres (ambient, post rock, indie, shoegaze) but at the same time, we believe that we have our own unique sound."

THE DANDELION WAR is Larry Fernandez (vocals), Mikey Fuson (guitar), Jeff Kay (guitar, keyboards), Julius Masibay (drums) and Chris Strebel (bass). We Were Always Loyal To Lost Causes was produced by THE DANDELION WAR and Aaron Hellam. The album was recorded, engineered and mixed in early 2012 by Aaron Hellam at Castle Ultimate Studios (Trophy Fire, Picture Atlantic) in Oakland, CA. Nicole Mortimore played violin on A Mi Alrededor. Artwork by Andrew McCormick. The band previously appeared on Chapter 12 of Deep Elm's long-running compilation series The Emo Diaries. In connection with the new album, Deep Elm will simultaneously re-release the band's nine track 2010 debut Geometries And Orchids worldwide. In the past two years, THE DANDELION WAR has toured up and down the west coast, opening for Asobi Seksu, Cymbals Eat Guitars and Imagine Dragons. The band resides a short drive from San Francisco in scenic Oakland, CA...known in particular for MC Hammer, Occupy protests, and the world's best taco trucks.

"A lovely slice of indie rock beauty that resonates in the vocal style...this is floating-on-a-cloud music.” - East Bay Express

"The perfect combo of cinematic and pop sensibilities. Sweet dreams are made of these..." - OurStage