Trying To Figure Each Other Out 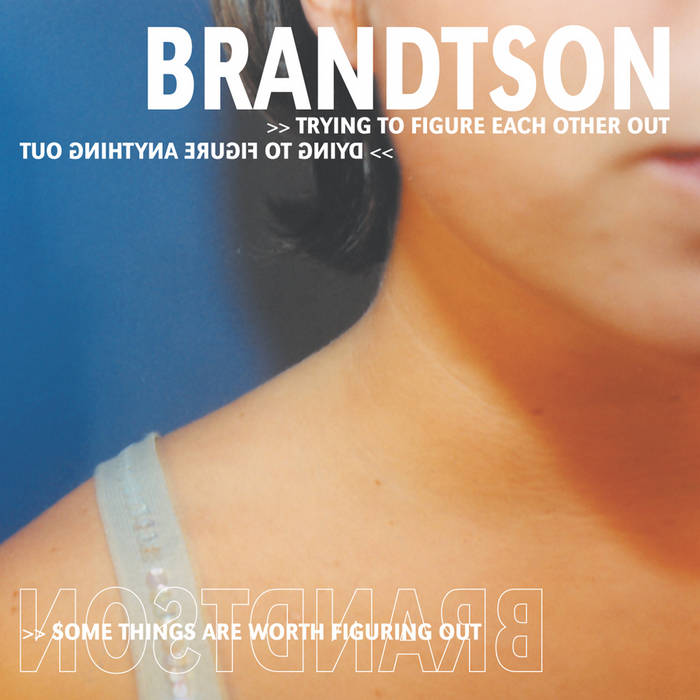 ihearttokissthecooter0 I first heard this off the emo is evil emo is awesome vol.1 compilation

Brandtson is like a bullet...when they're dead on, their combination of chiming guitars and dual vocals are show stoppers with your heart and soul. Trying To Figure Each Other Out is a triumph of a short player, filled with songs that have immediate appeal but enough complexity for the long haul. The introspective, revealing lyrics leave you with plenty to ponder as crushing guitars lay down fierce, power ballad riffs. Brandtson has taken what they know best, finessed it, tightened it up and locked it down with astounding results. The harmonized vocal rounds are absolutely infectious, bringing you up and down in a swirl of emotion. This remarkable set of six songs is simply sterling and the pristine Ed Rose production quality is second to none. The band far surpassed anyone's expectations with Trying...and then some. Brandtson can do no wrong. (DER-392)

"There's something about Ohio's Brandtson that sets them apart from the chasing pack. The broody quartet have that magical spark that turns a good song into a deeply moving experience. The rich guitar weaving of Myk Porter and Matt Traxler together with the gorgeous vocal harmonies and Porter and drummer Jared Jolley grow into full-on distorted riffage on the likes of 'Bricks and Windows' and the diary-honest lyrics lend an instant appeal to the entire affair. Yet another band destined for greatness." - Kerrang

"Trying to Figure Each Other Out EP is a triumph of a short player. The record comes screaming out of the gates with the emotionally charged 'Sic Transit Gloria' and, though the album slows down, the emotion never wanes. There is a heartfelt, cognitive flow through all five tracks. Brandtson's songwriting and musicianship seems to have taken huge step forward on this release and it is proven in solid, lingering tunes such as 'Leaving Ohio' and 'Boys Lie.' Brandtson has come through and truly produced. Like the promising third year player buried on the team's depth chart who finally get a chance to start and hits the big time...Brandtson is on its way." - Instant

"Revealing, personalized lyrics, broken hearts and tight melodies continue to define Brandtson's sound on Trying To Figure Each Other Out. This is a continuation of the stylish playing displayed on Fallen Star Collection, as guitarist/vocalist Myk Porter exposes the darker sides of relationships on '12th And Middle' and the poetic 'Bricks and Windows,' the concluding track that crests and retreats behind thick guitar walls that fuel a deliberate and moving song. One of Brandtson's greatest strengths is their ability to alter tempo without losing continuity as a band. 'Leaving Ohio' has a blazing guitar riff, but also features an intricately placed shift in mood before concluding with a wave of feedback. Brandtson's music rises to new heights here as Porter is supported by the musical muscle of Matt Traxler, John Sayre on bass and the soulful backing vocals of drummer Jared Jolley, who truly shines on the chorus of 'Boys Lie,' exposing a band that can temper frustration with harmony. Richly textured playing convey heated emotions through playing that delivers power through beauty with the lush 'Grace Thinks I'm a Failure.' I was struck by the darker elements of this record. For playing that is so beautiful, the scenes being articulated are not going to reassure your faith in romance. Heart wrenching and fabulous." - Jersey Beat