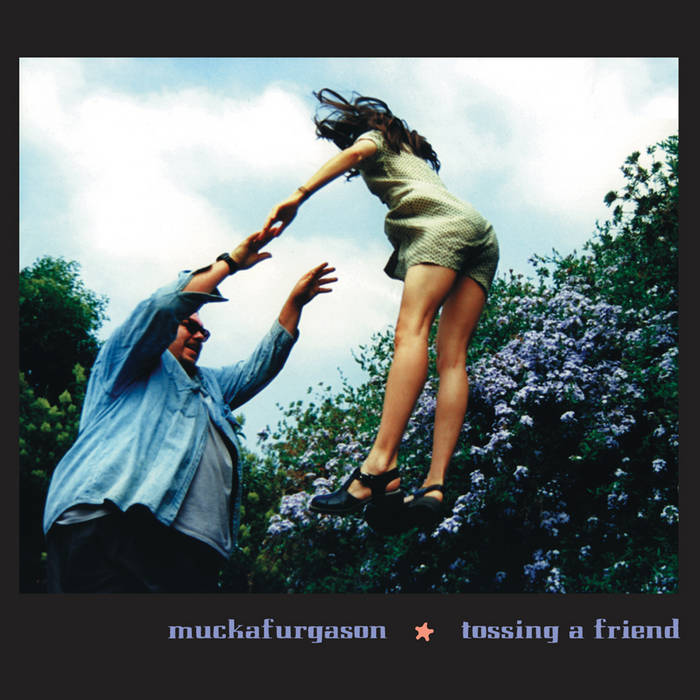 An eclectic mix of hip and loser, these three cynical savants called Muckafrgason explore everything from rock to pop to country to hip-hop on their journey through Genreville, leaving no era of the radio untouched. All of them sing - sometimes solo, in harmony, whatever - and they rotate instruments like musical chairs. So are they confused, lacking direction or suffering from multiple personality disorder? None of the above. Fearing no style or instrument, their debut explores more musical territory than most bands do in a lifetime. While they're panning a genre or astutely emulating its style, you'll either be peeing in your pants or simply impressed their uncanny ability to pull it off with flair and finesse. Admission at their live show will undoubtedly reward you with a smile from ear to ear, where the quirky harmonies, irresistible melodies and smart lyrics come together in that "ahhh, I get it" fashion. Tossing A Friend is a tongue-in-cheek tribute to anything and everything. Dubbed "the Benny Hill of Rock" and "the next great American sensation." Produced by John Kimbrough (of Walt Mink) who recently won his second Emmy Award in the category of Outstanding Music and Lyrics for co-writing Hugh Jackman's opening number at the 2009 Oscars. (DER-363)

"This New York Trio writes perfect little pop songs for post romantics who still haven't given up on true love. Cynical savants, they chronicle their despair with a sense of humor that's more than a match for their sense of melody. Making a play for all those indie broken hearts out there..." - NY Press

"Covering more rare territory than the Mars Probe is what Muckafurgason is doing these days. Andy, Chris and John are one brit and two yanks and the pacific is their playground. Musically this trio spins plays ontop of long sticks to circus tunes...and they do it with a snicker. They are the Benny Hill of rock and the Anita Hill of roll. Their latest release 'Tossing a Friend' sports artwork which will make you check withyour local police department on the proximity of convicted sex offenders. It was produced by John Kimbrough of Walt Mink with the grandeur of an 8-track. 'Sweetie Pie' brings to mind the glamour and truth of prohibition times whilst 'Spanish Fly' gives you the standing eight-count. They explore the harmonic miracles of Elvis Costello whilst capturing the grit of the Clash. Instrumentally these lads are as inventive with strings and winds as David Van Tiegham is with pipes and drills. Look for big things from these guys as they have captured the ingenuity of early They Might Be Giants on a very low budget." - Salt For Slugs

"Starting off with Weezer-esque pop harmonies and gliding effortlessly from there into any number of genres, be it country, hip-hop, or punk rock, each Muckafurgasong is a tongue-in-cheek tribute to anything and everything, whether it's the fuzzy Clash guitars of "Punk Rock" or the human beat-box Beck anthem about "Lunch," or a nostalgic pop song about a beloved Atari game ("plug it into the back of my TV/ come with me back to 1983/ reliving my happy childhood/ with my 2600"). I have to admire any band that aspires to be in the next "Cute Band Alert" in Sassy Magazine." - Consumable