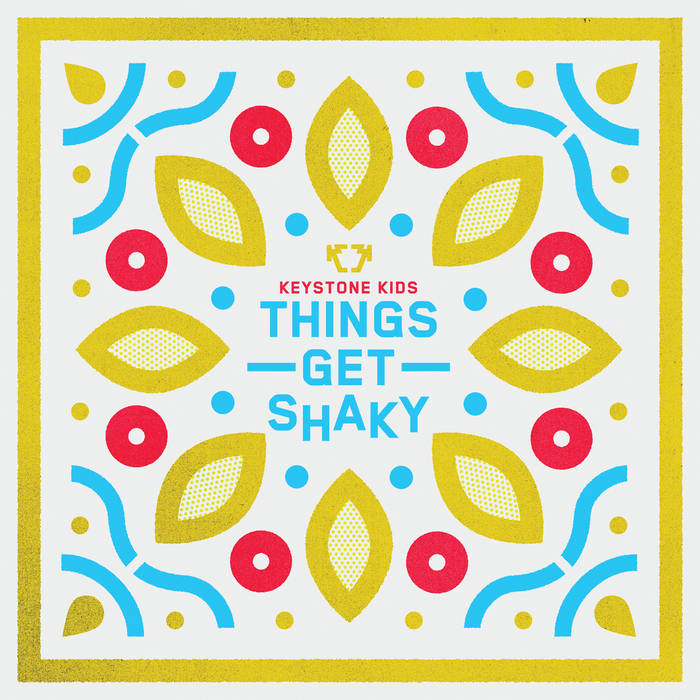 Sven B. Schreiber (sbs) This is yet another face of the ingenious "Slingshot Dakota" frontwoman Carly Comando - a joint venture with Ryan O'Donnell, supported by her husband Tom Patterson on drums. Compared to her other works, it's probably closest to early "Slingshot Dakota" (e.g. "Keener Sighs") but less rooted in folk rock, and with more wave influences. Favorite track: Up All Night.

The collaboration between Emmy Award-winning songwriter / piano instrumentalist Carly Comando and punk rocker Ryan O'Donnell may be a marriage of opposites, but the 26 solid minutes of indie-electro-pop excellence that resulted is anything but surprising given the talent behind it and the incredible chemistry shared by these two musicians. Things Get Shaky, the debut release by indie supergroup KEYSTONE KIDS, is more than an album of smart electronic pop with homages to 80's era synth lurking beneath the surface. The sheer strength of the songs, the crystal clear melodies, the playful duets and the sincere vocal performances together build to an addictive climax in nearly every song. Comando's stunning piano savvy adds moments of incredible beauty throughout, especially on the song "Falling." We're all suckers for a catchy melody...and it's here in droves. So forget what to call it and just enjoy. I love this record. And you will too.

"We wanted to write an album that we'd want to listen to all the time, an uplifting album that would get stuck in our heads. We wanted the songs to be as simple and accessible as possible, yet relatable and relaxing...so people can take away something from each song. We based the lyrics on our own experiences (in all honesty, a decent amount of our lyrics have to do with the TV show The Jersey Shore as every summer it seems ‘things get shaky' between Sammi and Ronnie), but anyone can really take from them their own meaning" says Carly. She continues "the album title is taken from a line in the song ‘Crumble.' It seems every year there's a point in our lives where things get a bit iffy and weird, and we all have to get through it. All of the songs on Things Get Shaky illustrate a variety of emotions we feel throughout the year, whether it's heartbreak, getting over someone, loving someone or dealing with negativity. And in the end, even when things try to shake us up, we make it through. We just want the album to make people happy." "This album means a lot to me in different ways. When Carly and I first talked about writing the album, there was a lot of discussion about how we would do it and what it would be like when we were done. But after ‘Mouth' and ‘Miles' which were our first two songs, I immediately felt a stronger connection to it than almost any other music I've been a part of. My main hope is that when folks that listen to Things Get Shaky they'll be walking around for the next day or so with at least one of the songs in their head - whether they wanted to or not" says Ryan.

Keystone Kids are Carly Comando (vocals, keyboards, piano) and Ryan O'Donnell (vocals, guitar, bass). Tom Patterson played drums. Things Get Shaky was produced by Dan McKinney and Keystone Kids in Dan's House Studio in Center Valley, PA. Dan also played tambourine. Carly is well known for her instrumental piano ballad "Everyday" which is the score to viral video "Noah Takes a Photo of Himself Everyday" which has been viewed 22,500,000+ times on YouTube (bit.ly/cc-everyday). "Everyday" has been featured on CBS News, Good Morning America, VH1's 40 Greatest Internet Superstars and has been licensed by the NBA, Amnesty International and the World Economic Forum among others. Carly was honored by the Academy of Television Arts and Sciences with a Primetime Emmy Award for her musical contribution to The Simpson's episode "Eternal Moonshine of the Simpson Mind." Carly is also in the band Slingshot Dakota and she enjoys baking. Ryan was in the punk band Yo Man Go and is also in the band Laugh It Off. Keystone Kids reside in Lehigh Valley, PA. Carly lives in Bethlehem (home of Jesus, obviously, duh) and Ryan is from Allentown. Pennsylvania is the Keystone State, so Carly + Ryan = Keystone Kids. Their hometown, nicknamed "Steel City," is known for the Crayola Crayon factory, Sands Casino taking over Bethlehem Steel and is the true subject matter of Billy Joel's song "Allentown" (bet you didn't know that).