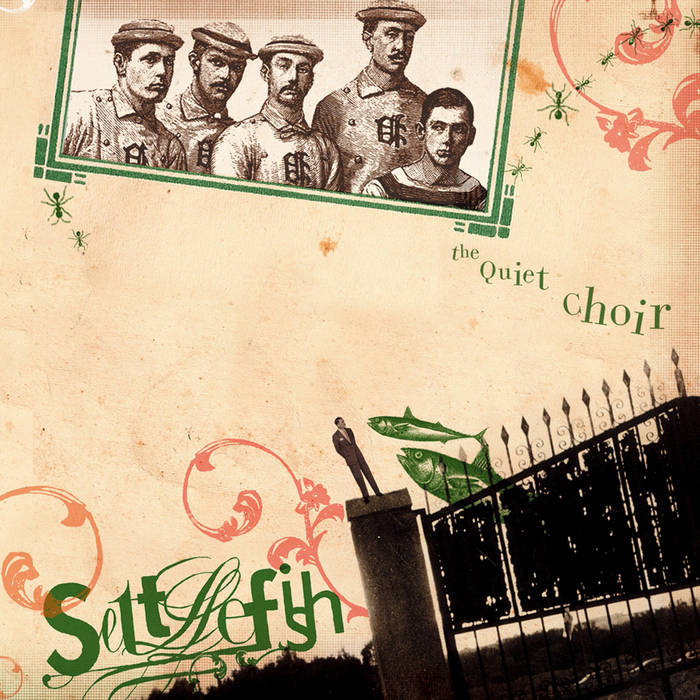 The Quiet Choir contains six acoustic tracks (plus 3 Bonus Videos) meant to accompany Settlefish's full-length The Plural Of The Choir, which marked the beginning of an innovative stage for Settlefish: one that found the band flexing its musical muscle, composing songs that shift from sweeping, haunting mini-epics to terse, pulsating blasts of cacophony, wrenching and wringing the unmistakably American genre of indie rock into an inventive sound bursting with an unconventional European perspective. Settlefish revels in the forays of sound that boil below the surface of ordinary experience...and it's this sort of exploration that propels their music into unexpected, exhilarating directions. (DER-467)

"Italian quintet Settlefish offer up their second album, The Plural Of The Choir, a multi-movement indie-jazz / post-hardcore odyssey with heartbreakingly poetic lyrics. Rocking Like Modest Mouse and At The Drive-In, it's one of the best thing to ever come out on Deep Elm, so check it out." - Alternative Press

"The Plural Of The Choir is a superbly cohesive and original work of art, combing over the fields of several genres for the best traces of style to create something that delicately walks the tightrope between accessible and experimental. The band's lush, atmospheric sound seems to throw together the post-prefixed versions of their take on hardcore, punk and rock, and in doing so, comes off dreamy and yet somehow dancey and singable. The production is raw, and it couldn't fit the style better, giving the record an improvisationally-executed feel. Oh Well immediately starts off with ridiculously dynamic chord movement; one guitar is beaten through power chords and another is used to fill the speakers with flowing, ambient riffing. Blinded By Noise is a summed-up conveyance of the band's more intense, aggressive moments, as it takes an At The Drive-In influence to refreshing heights, while its partner in crime, Two Cities, Two Growths, is the more mid-tempo, depth-rising example of the tense emotions the record is hiding underneath the surface. We Please The Night, Drama couldn't close the record any more appropriately; it's a six-minute track that flushes out every last bit of atmospheric tension it's been building up. Settlefish is likely to leave a permanent inkling upon the indie rock scene, as The Plural Of The Choir is a great effort that lurks in experimental waters without drowning finless." - Punknews

"A musical masterpiece! Haunting, melodic, catastrophic and intense, The Plural Of The Choir puts Settlefish at a new innovative level. From beautiful ballads to pounding attacks, this is a record of multiple conflicts, raging emotions and naked experiments. It's gentle and honest without being flimsy, and Settlefish have found the perfect balance in variation. Kissing Is Chaos begins the album in style with its dreamy opening sequence and eerie harmonics, building into a tremendous crescendo and fading out again as singer Jonathan Clancy comes in with his distant, all-the-time-in-the-world vocals. This doesn't last long though as Oh Well brings up the tempo with its deep rolling drums and nagging guitars. The whole album is in fact, perfection. Blinded By Noise, Rooms, and Girl Understanding Song are all highlights for me before the delicate piano in We Please The Night, Drama brings the album to a sad yet optimistic end. I cannot recommend The Plural Of The Choir highly enough!" - Screaming Tarts