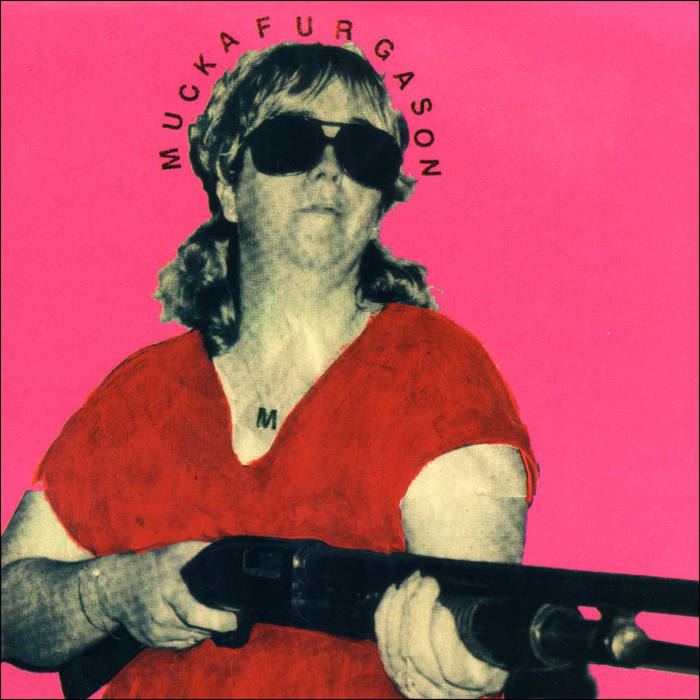 Muckafurgason plays everything from rap ("MC Speller") to pop ("Dictionary") to rock ("Part-Time Rock Star") to punk ("Liar")...and that's just the first four songs on their second full-length The Pink Album. Produced by John Flansburgh of They Might Be Giants, the album is a tongue-in-cheek tribute to anything and everything, leaving no era of the radio untouched. All of the Mucka boys sing ­ sometimes solo, in harmony, you name it ­ and they literally rotate instruments like musical chairs. Are they confused, lacking direction or suffering from multiple personality disorder? None of the above. These cynical savants fear no style or instrument, exploring more musical territory in a single album than most bands do in a lifetime. "We're bi-curious when it comes to genres, we dabble in everything" said Jon Lee (also co-creator of tv series Delocated, Xavier: Renegade Angel and Wonder Showzen) when asked about the band's modus operandi. And as for their inspiration, Jon adds "We're inspired by our mothers. Thanks, Moms." Whether they¹re panning a genre or astutely emulating its style, you¹ll be impressed by Muckafurgason's uncanny ability to pull it off with flair and finesse. So loosen your tie, prepare a grin and enjoy this quirky, smart and sarcastic journey through Genreville. (DER-502)

"A grab bag of musical surprises, Muckafurgason give brand new meaning to the term 'genre skipping' by playing rap, rock, pop and punk all within the first half of 'The Pink Album'. Not only do they play various forms of music here, but the band take turns singing - either solo or in unison - and alternate instruments from track to track, proving that they are not only fearless of genres but also different instruments as well. A comical disc with tongue in cheek references to just about everything related to pop culture, this is first and foremost fun music despite the cynical wordplay and despair related topics. Quirky, original and all played with seemingly reckless abandon, it's pretty clear these guys are talented musicians in their own right, even with their parodies and unusual sense of humor that tends to be the focus here. The big difference here between this and the standard spoof disc is this one is the sort you'll listen to repeatedly. Entertaining, hilarious and so unpredictable, this is the sort of music that will make you laugh out loud but remain planted in your mind from the sheer catchiness of it." - go211

"Sometimes, musicians take themselves and their music far too seriously. This is not the case with Muckafurgason. But the band isn't just having fun on their own account ­ they take no prisoners. Every genre, from rap to pop, is spoofed on The Pink Album, with hilariously uncanny accuracy. If you need a laugh, then you need Muckafurgason, it's that simple." - Bloginity

"This trio of gifted, offbeat and ambitious musicians (they are all singers and multi-instrumentalists) visit every facet of rock to pop-rock to punk to psychedelic to rap ('MC Spella') with a sprinkling of British humor. The first notes of 'Dictionary' have the spirit of The Beatles and hilarious lyrics to match (I was out with my friend / he called me a name that I've never heard / was it good was it bad I knew that I had to find that word / so I looked it up in the dictionary cause I could not comprehend / in a book full of explanation of words I found you're not my friend). The group also masters rhythmic punk on tracks like 'Liar' or 'I want to get...KC' and excellent lyrics cliches ('I want to get fucked up / drive my pickup truck / throw empty beers at sluts '). But it would be too easy for the group to stop there.They explore psychedelic rock with songs like 'Rock Spaceship' and 'Robert Wilson'. These three troublemakers have equally mastered jazz arrangements and lay down two titles including the near-instrumental 'Subtle Spy' and the touching 'Will you go with me?' But where Muckafurgason is the best is probably in the pop-rock songs. 'Part-time rockstar' is a melancholic pop-rock gem by its story that can raise a smile or cry (reminding us of the brilliant writing talent of the trio), 'Why don't you get married?' has the best vocal performance with that sweet voice. 'Killing flies', besides its crazy lyrics, is a gem of a ballad with acoustic bass, guitar and proves a violin at how music can transport us without overdoing it. The Pink Album succeeds based on its nostalgia alone." - AlternativNews