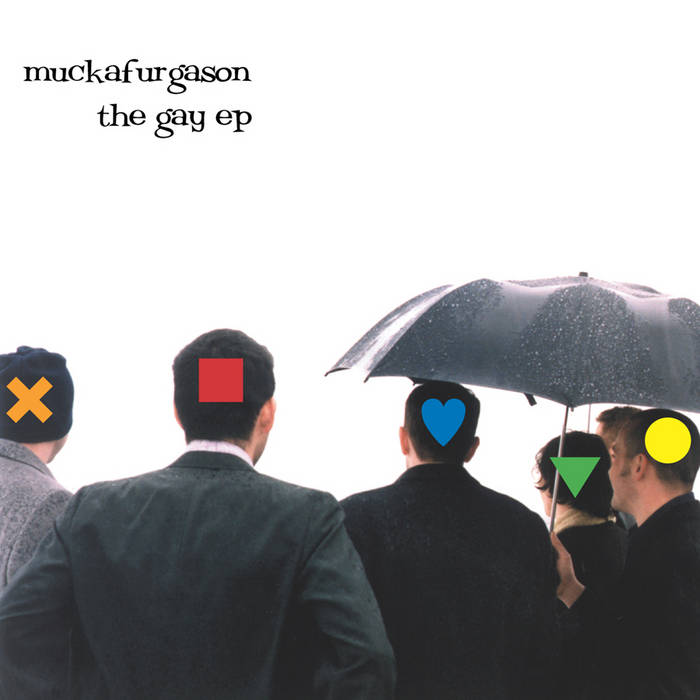 Webster's New Riverside Dictionary (1984 edition) defines "gay" as merry, bright and lively, inclined to social pleasures. Not until the final definition does 'homosexual' appear. However, sex pervades all nowadays and not surprisingly, the term is only used with that meaning. Well, Muckafurgason will have none of this (well, maybe a little). The Gay EP presents seven songs which lie somewhere between the popular notions "if you read this, you are gay" and "we'll have a gay old time." Exactly where is a matter of subjectivity. You'll enjoy the grammatically incorrect "You Ain't A Man [Until You've Had A Man]" (with a disco edit that's sure to challenge Abba's "Dancing Queen") and explore the opposite side of the gay coin with "Every Once In a While." Overheard remarks and late night conversation at it's best, these are clever tales of life, love and happiness on New York's Lower East Side. NYPress declares "perfect pop songs for post-romantics." Brilliant. Produced by John Kimbrough (of Walt Mink) who recently won his second Emmy Award in the category of Outstanding Music and Lyrics for co-writing Hugh Jackman's opening number at the 2009 Oscars. (DER-376)

"I don't give a flying f*ck what anyone else thinks of this band because Muckafurgason are by far the most original and ingenious musicians of our time. Like your mom's mouthwash, on the Gay EP they swish up almost every genre (and even create some of their own) in the music industry and form six tunes that backs every notion that this band deserves every bit of success that's coming their way. So quit whining, you're just jealous because these three geeks thought of all this before you did." - Muddle

"You Ain't a Man is some damn fine pop-rock. The West mix is the the club hit dance remix which somehow manages to be even catchier than the more straightforward East mix. Gay or straight, it's hard not to crack a smile at the joyful choruses of 'You Ain't A Man Until You've Had A Man,' not to mention the silly clapping-and-voices breakdown in the middle. A general relationship / love theme runs throughout, from the poignant Ben Lee-ish melancholy of 'Ex-Girlfriend's Birthday' to the goofy bop of 'I Wanna Be Your Guy' and the quiet retro-swing of 'Every Once In A While.' The result, thankfully, is a catchy-as-hell little mini-album of pop genius." - Space City Rock

"When I was about fifteen I figured EPs were the biggest rip-off on the face of the planet. Why bother going through all that trouble to give your fans only a few measly songs? Beam ahead a few years (okay, twelve). Today, I think they're the greatest thing since eight-tracks. And I particularly like 'The Gay EP' by some pop band called Muckafurgason. This is my first Muckafurgason adventure. They released a few seven-inch EPs and a cassette of Prince covers (of all things) on their own label Edelstein Records and a full-length on Deep Elm in 1998 called 'Tossing a Friend.' The seven-track 'Gay EP' gives the listener a perfect indication of what Muckafurgason is capable of. The kick-off song is hands down the best. 'You Ain't a Man (East)' sets the record straight, ironically enough. We've suspected it all along, and the boys in the band (Andrew Ure, Chris Anderson and John Lee) use their '50s crooner appeal to convince us, once and for all that, 'You ain't a man until you've had a man.' The song is an aggressive, fun, sexually suggestive pop tune with contrasting innocent vocals topped off with a church organ. The title of this EP will raise some eyebrows for sure. Hoards of people across North America will ask, 'Are these guys gay?' This is a record even my Mother would love. For some of these songs conjure up visions of sock-hops, poodle skirts and letterman jackets. Even better, Laverne and Shirley. 'I Wanna Be Your Guy' is a '90s version of what Mom was listening to in high school. Everything comes full circle. Even I, with my deep-rooted hatred for ballads, could appreciate the cynicism in 'My Ex-Girlfriend's Birthday.' Muckafurgason loves to play with the lovesick teenager theme, but they're not cheesy like countless laughable mainstream boy groups. Muckafurgason is funny, but the difference is we're laughing with them, not at them. And that makes them good at what they do. 'Hey is that Erasure doing ABBA?' No, you hep cat, it's the disco-groovy dance remix, 'You Ain't a Man, (West)' complete with synthesizer bleeps, drum machines and a get-down-and-boogey feel to it. Yes, this song is good enough for a remix." - Jagged