Sunshine In A Shot Glass 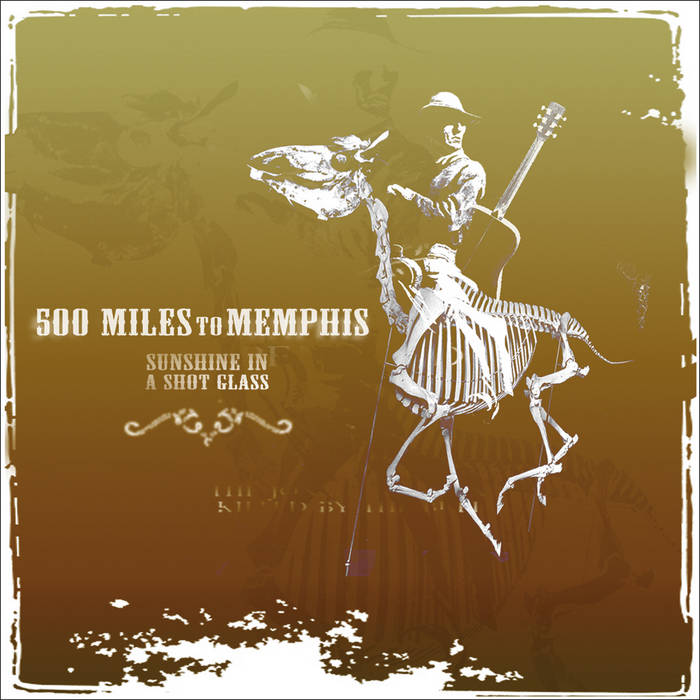 Named after the distance from the band's hometown of Cincinnati to Graceland, 500 Miles To Memphis plays rowdy, insanely catchy, sometime heartbreaking but always inspiring "country punk" on Sunshine In A Shotglass. These songs are whiskey-soaked in bittersweet lament, but this is definitely not an alcohol-fueled pity party. Rather, it's the slug of Jack Daniel's you throw back before crawling on stage to sing your heart out. Lead vocalist Ryan Malott is the impetus behind the band's heartache, and this soon to be acclaimed debut is undoubtedly his catharsis. While Malott's lyrics draw from afflictive personal experience and a weary western sprawl that only true country music can evoke, these rousing tunes are cranked out with punk grit and determination and a brash rock n roll attitude. Somehow it makes life seem a little more bearable and a hell of a lot more fun, at least for the duration of these twelve exhilarating songs. Slather on an infectious melody, some bright, brash guitars and a touch of bluegrass fiddle and suddenly tracks about cocaine-addicted friends and coma victims praying for sweet death ring out like the perfect, invigorating remedy for the honky tonk blues. It's the type of honest music that can prompt a sentimental, liquor-tinged therapy session between old friends or incite a raucous, fist-pumping sing-along amongst perfect strangers at your neighborhood pub. And that's a shot of firewater we're happy to take any day of the week. (DER-464)

"Where has 500 Miles To Memphis been all my life? This Cincinnati-based band's debut full-length Sunshine In A Shot Glass is simply fucking amazing. Review over. But seriously, this album is filled with the sort of bittersweet country punk that both punks and rednecks can't help but love. Seriously. It's instrumentally ambitious but never approaches wankery as fiddles, slide guitar, pedal steel, organs, and banjos sit alongside churning guitar-bass-drums arrangements. Now when an album is this good (and Sunshine In A Shot Glass is) I hesitate to make easy comparisons but just to give you an idea 500 Miles To Memphis sounds sorta like Lucero but with a little more twang, bigger breakdowns, and less gravelly vocals; maybe like Lucero vs. Attack In Black vs. Bill Monroe. Intrigued yet? It is whiskey-soaked, twangy bluegrass, punk-infused country rock. Honestly, Sunshine In A Shot Glass is instantly captivating and needs no time to grow; tender at times and boiling lava hot at others. It is rare (if not almost impossible) that an album can be well-suited for both line-dancing and mosh pits, but somehow this one is. Near perfect." - Can You See The Sunset

"Editor's Pick! With summer coming to a close, it's almost time to put away those sunshine jams and break out music to get me through another Canadian winter. 500 Miles To Memphis is the perfect band to help us through that transition. Sunshine In A Shotglass goes just as well with an open window drive through the country as it does with a glass of stout by the wood stove. The band's combination of punk grit and attitude combined with country staples such as a vocal drawl and tales of remorse make the band appeal to Social Distortion's fans as much as Lucero's." - Punknews