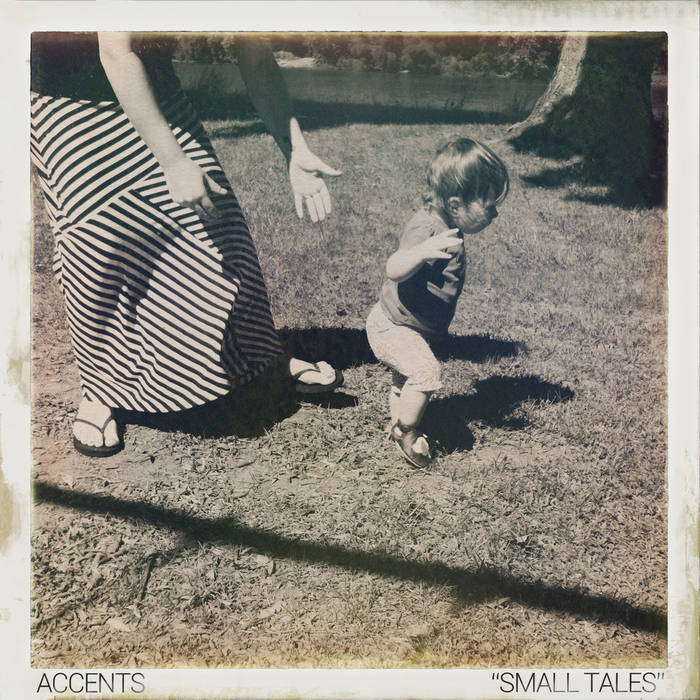 Piotr Slettitsj What a great mini-album this is, 5 songs, 5 favorite tracks.
FYI: This band is currently named "Darling Valley", check them out on Bandcamp. Favorite track: Panic.

Indie folk rock wonderband ACCENTS is back with Small Tales, an aptly titled 5 track mini-album featuring "Down Down Down" and the follow-up to their March 2014 full-length Tall Tales.

"Small Tales is meant to pick up where Tall Tales left off. It's a logical progression, but thematically the songs take a slightly different turn. While Tall Tales is about reflecting on growing up and finding peace in that, Small Tales is really about the insecurities that are always going to follow us, no matter how old and wise we become. In some ways, we are always going to feel small in the world, and constantly trying to find our own place in it. What does it mean to settle? How do we choose between logical choices and what our heart tells us to do? These seem to be inescapable questions at any age" says guitarist Jordan Stewart.

Main songwriter and vocalist TJ Foster continues, "There were a lot of different themes present on Tall Tales, but the overarching concept was about finding a way to deal with uncertainty as we grow and learn. Each song on Small Tales continue to expand on that concept, each in different ways. Whether it's a couple figuring out how to get past their own personal insecurities on 'Down Down Down,' a middle-aged man longing for his youth but realizing he has to let go on 'Settle Down Instead' or choosing to ignore the existential questions about what may or may not be after this life on 'For Now,' the message is simple: time flies, take nothing for granted. Leave your worries in the ground and you can join them when you're good and ready."

Accents came out of nowhere in 2012 with an astonishingly mature debut Growth And Squalor which was heralded by both fans and press as one of the year's best releases. Tall Tales offered even more depth, color and relatability with the sheer honesty behind every note, melody and lyric making such a strong impression on all who listened. Small Tales is no less of an achievement, cementing Accent's position in the overall indie rock lineup, solidifying "indie folk" as both a mindset and a sound. This record will hit you hard.

Accents is TJ Foster (vocals, guitars, keyboards), Lauren Foster (vocals, cornet) and Jordan Stewart (guitar). Previous members who performed on Small Tales include Benjamin Hemingway (drums, percussion, keyboards, vocals) and Matt Bent (bass, vocals). All songs were written by TJ Foster and produced by Accents. "Down Down Down" was mixed and engineered by Benjamin Hemingway. "For Now," "Settle Down Instead" and "Panic" were mixed and engineered by Mike Kalajian. "Underwater" was mixed by Benjamin Hemingway and engineered by TJ Foster and Benjamin Hemingway. All songs were mastered by Mike Kalajian from Telegraph Recording (The Narrative, Athletics, Moving Mountains). Accents is preparing to release a six week long video series titled "The Autumn Sessions." Filmed in idyllic outdoor locations throughout Upstate New York, these sessions will present stripped-down performances of various tracks from all of the group's releases, starting with "Down Down Down" from Small Tales. Accents released their debut "Growth And Squalor" on Deep Elm in May 2012. The band released their second full-length "Tall Tales" on Deep Elm in March 2014. Both albums received much acclaim from both fans and media. Band photo by Victor Rodriguez. Cover image by TJ Foster.