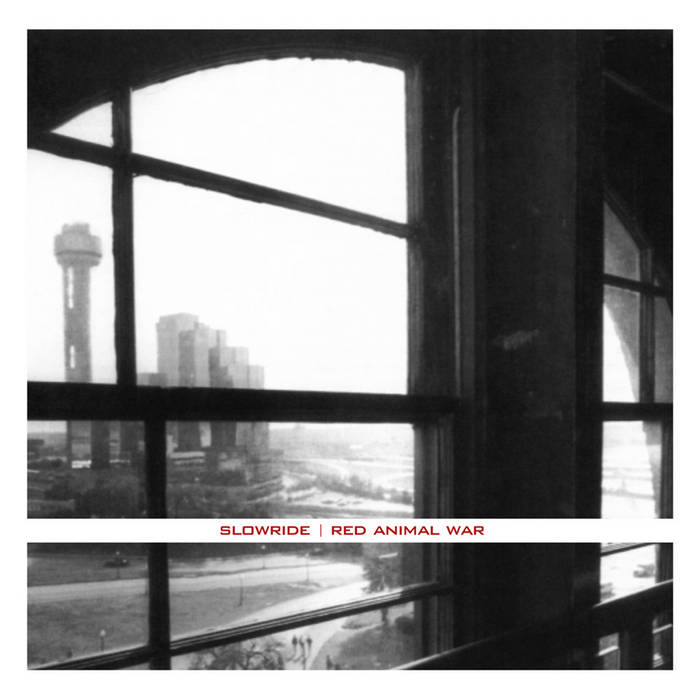 Dallas, Texas is well know for three things: the Cowboys, the JFK assassination (the inspiration for the artwork) and this split between Slowride and Red Animal War. All recorded by Ed Rose (The Appleseed Cast, Get Up Kids, Brandtson, Slowride) in winter 2001, these songs show two Dallas-area labelmates at their absolute best...both lyrically and musically. Starting with Red Animal War's "77", it never lets up until you're clapping along to Slowride's fittingly-titled ending track "Dear John." We'd be inclinded to offer a 100% money-back guarantee on this split, but it's hardly necessary...there'd be no returns. Simply awesome. This is the Second release in our self-titled Split Series. (DER-412)

Deep Elm has done it. They've put out a split with Red Animal War and Slowride that blows the Alkaline Trio / Hot Water Music ep out of the water. Doing it the right way by allowing each band to build off of the others songs, the record starts out with Red Animal War who showcases their ability to write a strong lyrical song as well as implementing some very interesting music. Next up is Slowride with the Jesus Candle which starts out with some driving guitars and then turns into one of the better melodic punk / indie rock songs I have heard in a long while. Filled with dark and catchy lyrics, this release is definitely one to check out, as it draws a picture that the hardcore kid can relate to but is catchy enough for those who enjoy the poppier side of punk rock." - Poptart

"Wow. I haven't been this impressed by a split like the Red Animal War / Slowride EP for a long time. Red Animal War pride themselves on being very technical with their music. They remind me of Braid and Fugazi with many different time signatures and songs that are always unpredictable. Slowride on the other hand is influenced by pop, punk and sometimes even hardcore. They are reminiscent of Jawbreaker, both with their rhythms and structured songs. The band has lots of energy and aggression that will please everyone. All the songs by Red Animal War and Slowride sound fantastic. If you love Deep Elm, go get this now!" - United Front

"On this split, Red Animal War go through a remarkable progression with three new songs (maybe their best so far) while Slowride stick to the concept that made their debut so charming and enjoyable. Red Animal War kick things off, preserving a deep, technical approach, but now they're working with clearer structures. Describing their songs is not easy, as they're so multi-layered, so rich with different perspectives. They never reveal too much; they need to be discovered with patience. Still, they're hard-hitting as ever. Meanwhile, Slowride specialize in emotional rock, which includes powerful guitars, catchy melodies and charismatic vocals. To sum it up, this release is for those who can't get enough of Slowride's full length and it marks Red Animal War's progression of becoming one of the most interesting and original bands on Deep Elm, as well as in the whole genre." - Enough