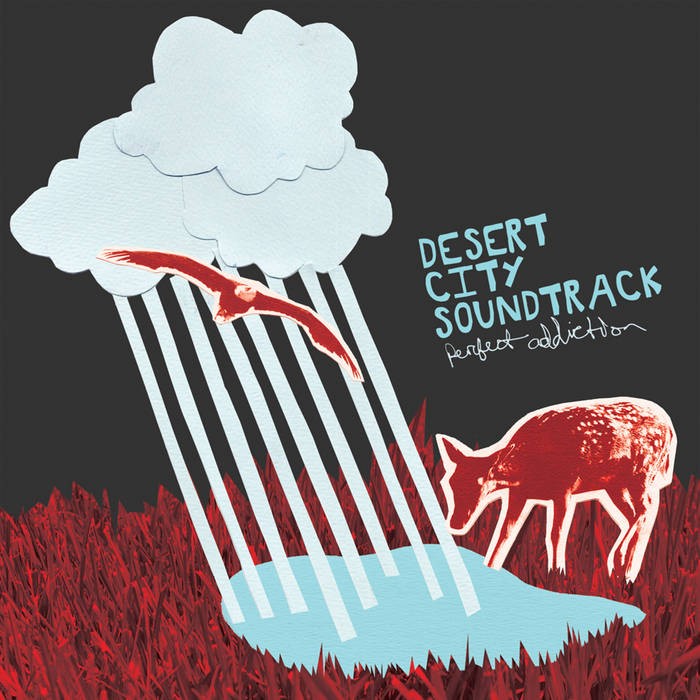 brantly More softly subdued than their other LP's, (Matt Carillo only screams a couple of times on this...which I miss, but it still works) distancing the band form its post-hardcore inception and embracing a more reflective, meditative sound that certainly earns the Black Heart Procession comparisons, but this LP also plays off of classic mid 90's emo, a darker take on Death Cab For Cutie and what I'll call a chamber-indie version of Sparklehorse.

With three previous releases exhibiting willful disregard for anything resembling a traditional genre, Desert City Soundtrack's latest effort, Perfect Addiction, shows further vision, craft, originality...plus a lot of interesting surprises. The prominence of piano and drums creates a melancholic yet symphonic atmosphere, with vocals alternating from the smooth, dulcet tones of Matt Carrillo, to a harsh screaming effect which haunts yet envigorates. There are beautiful arrangements, ghostly piano-led sequences and a sombre tone which make the hairs stand up on the back of your neck, like the score to a sad and intimate story. It's the complete attack of vocals, piano, trumpet, guitar and rhythm section that works so well, making the emotions tangible and intense. Produced by Brandon Eggelston (credits include Modest Mouse, Pretty Girls Make Graves, Les Savy Fav) with a sound all its own, Perfect Addiction is one of the most powerful and genre-defying albums of the year. (DER-444)

"You know how rock critics like to talk about how a certain album is the 'perfect summer album?' It's a shame just to ignore the other three perfectly respectable seasons out there: thus, we christen Desert City Soundtrack's Perfect Addiction, 2005's perfect autumn album. The Portland, OR trio carefully maneuver their way through a dozen tracks of eerie, moody, piano-driven indie rock that straddles the line between lullabies and nightmares, and perfectly accompanies the changing leaves." - Alternative Press

"Perfect Addiction from Desert City Soundtrack could be the lost Bright Eyes record, or at the very least, obscure gems taken from the vault of Oberst. Desert City Soundtrack combine all the elements of what makes bands such as Bright Eyes, Death Cab and Jets To Brazil so appealing: finely-tuned pop songs with crunching guitar, alcohol-influenced vocals and piano-driven beats, melting together to create some of the most fragile, yet wonderfully articulate tracks ever laid to tape. From Last Night's Floor to the finisher, The Dining Dead, Desert City Soundtrack make it apparent that they have crafted these songs so perfectly and with such precision that I'd actually believe it if they told me they could play them in their sleep. These are their lives, and indie rock is the soundtrack to which their story is told...and boy is it a good one." - Under The Volcano

Desert City Soundtrack has only improved with age, and this is easily the band's greatest work to date. Perfect Addiction is perfectly dark; gone are the louder, more emo moments that populated their previous work. Though some bands claim the influence, Desert City Soundtrack is one of the few bands to fully understand, appreciate and carry on the Three Mile Pilot torch. The mood never lifts, the dour and sour times never break and the album never fails to leave an emotional stain on your soul. Perfect Addiction is perfect melancholy." - Mundane Sounds