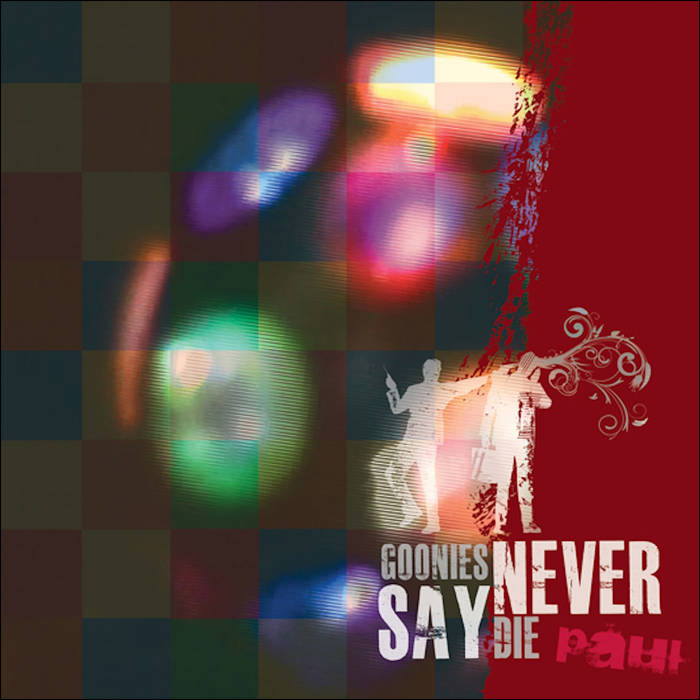 Paul is the new instrumental single taken from Goonies Never Say Die's forthcoming sophomore album "No Words To Voice Our Hopes And Fears" coming soon on Deep Elm Records. Sink Jacinto? is an unreleased instrumental that is only available on this two track single release these Blackpool, UK cinematic post-rockers. Recorded, produced and mixed by Simon Morgan and GNSD from October 2009 to March 2010 at Kendal College (Kendal) and Copperknob Studios (Blackpool, UK). Artwork by Barry Parkinson for Colourful Thinking. (DER-505)

Goonies Never Say Die's debut instrumental full-length album "In A Forest Without Trees" was released in Fall 2009 by Deep Elm to much critical acclaim. Alternative Press Magazine named GNSD "One of the 100 Bands You Need To Know in 2010." In addition, the band recently appeared live on "BBC Introducing with Sean McGinty", has music featured on Tony Hawk's Pro Skater2 iPhone app and has had nearly a dozen songs featured on popular US television shows.

"GNSD aren't just any old bangers and mash, they are free range suckling wild boar and Bramley-apple sausage served with creamed aubergine and Maris Piper, asparagus and red wine onion gravy; they're the tits! Paul is the first self-produced single to be released from Goonies' forthcoming second album on Deep Elm Records. It's more of a double A-Side really as Sink Jacinto is just as good as the title track. Paul is a funny one for Goonies really. We are used to them shifting moods within songs and moving us through transitions but here we are treated to four very distinct sections which are only marginally aware of each other. It's quite a brave choice for a single and the label must be double sound to not push them into releasing something more trademark. The first section is all building moody twangs and plinks in the back driven by a big solid rock beat while Barry Parkinson nails down soaring delay-laden lead parts. This carries on 'til it almost sounds optimistic then crashes into a stripdown, which slowly builds back up to, eh? WTF? Is that a disco beat? The last section is awesome: Danny Kerr is skipping beats in the main hook, chucking little triple snares in and punctuating orchestral stabs with tricky cymbals. Simon Morgan comes off his twangs and swerves behind Barry like he's chasing him towards the end of the song. Clever stuff! Sink Jacinto is in the classic GNSD style. They have coined the phrase cinematic post-rock and this is it. Kinda like the score of Robin Hood Prince of Thieves being played over the footage from Transformers. Starts like a miserable ballad and finishes an angry, apologetic shoegazy reprise. Basically the single is ace and you should buy it! Not nick it or borrow it. Go to the shows and buy it!" - Duke's Dreary

"Wonderful landscapes imprinted with the kind of textures often pioneered by Explosions In The Sky and Mogwai." - Manchester Music