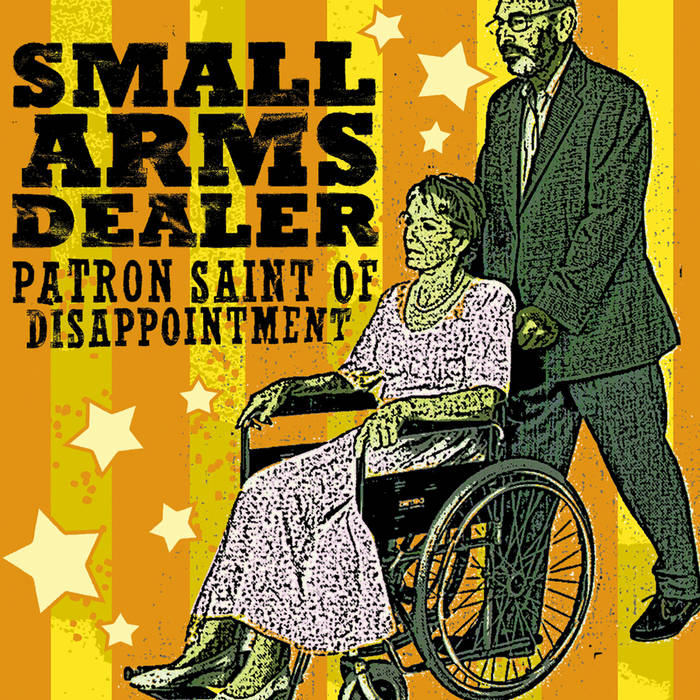 Small Arms Dealer firmly believes that punk rock played with a raging fire in the belly is the very best kind of punk rock...easily digestible in large, combustible doses but guaranteed to leave you with that permanent, ever-so-worth-it feeling. And there's no indication that any member of this Long Island quintet is holding back one iota, writing songs that sound just as urgent and ferocious on their hundredth spin as they did on their first. Their sophomore full-length, Patron Saint of Disappointment, delivers sweat-drenched, clobbered in the face, punched in the gut, smacked in the ears, pissed off punk rock from a battle-wary crew including Jason Lubrano...who is in top cynical form, spitting lyrical venom in the collective faces of religion, politics, corporate America and even himself. Never before has a vocalist churned out such beautiful poetic poison...all with a mischievous smirk and a wink of the eye. The band echoes his war cries with gruff, throaty sing-along chants, guitars exploding with TNT force and a rhythm section pounding out just the right amount of octane. If there's any band that's going to be left standing after the apocalypse, it's gonna be Small Arms Dealer. There's more than enough guns-a-blazin' firepower, unforgettable melodies and devil-may-care attitude to handle four little ol' horsemen. This is one certifiably kick-ass record. Recorded by Phil Douglas of Latterman. (DER-462)

"If you imagine a combination of early Rise Against and Strike Anywhere, you may have some sense of the raw, melodically inclined punk rock spat out by Small Arms Dealer. The band shifts between raging, aggressive tracks railing against organized religion and the slower, thoughtful commentary on the human condition. There's a clear, overarching anti-religious message throughout Patron Saint of Disappointment. As long as no one puts them on tour with Underoath, Small Arms Dealer should do fine." - Alternative Press

"Bow your head and drop your knees to the floor for the Patron Saint of Disappointment, the latest from the underground punk rock poets and philosophers Small Arms Dealer. Back from the grave my favorite Dealer has returned with thirteen new songs of hopelessness, small towns, disappointment and tiny doses of hope. As dark a record as it sounds, Patron Saint of Disappointment tempers every song with a cutting sarcastic wit that somehow softens the blow. Instead of finishing the record and wanting to slit your wrists you find yourself wanting to take that knife and pin all your problems to the wall. There's something about melodic punk rock that pushes you through your ills. In a year that's seen shockingly few truly awesome punk records, I present you Patron Saint of Disappointment. Like a good Dealer, these guys have delivered once again. Thank your lucky stars and get into this." - Mammoth Press

"Deep Elm Records keeps churning out the hits. Small Arms Dealer's Patron Saint of Disappointment is certainly another proud notch in their solid punk records belt. Taking a page out of the Latterman book of passionate, rough-around-the-edges punk rock, most of the songs reach a point where they appear to be holding on by a thread before a rousing finale brings it all back in a multi-vocal blast of throat-tearing emotion. Songs like 'Small Arms Dealer Makes Baby Jesus Cry' possess some Rollins-era Black Flag kick while still maintaining a tight hold on hardcore's more melodic modern incarnation. Patron Saint is a compelling and original mix of modern punk elements." - Exclaim!

"Contrary to what the name might indicate to some, Small Arms Dealer does everything but disappoint with this awesome new album. The group comes out with guns blazing and shows no mercy on Patron Saint of Disappointment. The reckless, uncompromising style combines contagious melodies and meaningful lyrics to create no-bullshit punk rock. Small Arms Dealer happily lacks frills and schmaltziness, and each song surges forward with uncontainable passion and hard-hitting vocals. As with all good punk rock, this record needs to be listened to on a stereo with gigantic speakers and a room full of your friends. Hard-nosed, irrepressible energy explodes out of Patron Saint with every note and isn't for the faint of heart. These boys from Long Island emphatically declare their beliefs and make absolutely no apologies for it. Fans of Kid Dynamite, Bear Versus Shark or Good Riddance will find this band right up their alley. Small Arms Dealer makes the type of unabashed punk rock that I have come to know, love, and go nuts for, and all fans of punk rock should check this album out." - Delusions of Adequacy