No Words To Voice Our Hopes And Fears 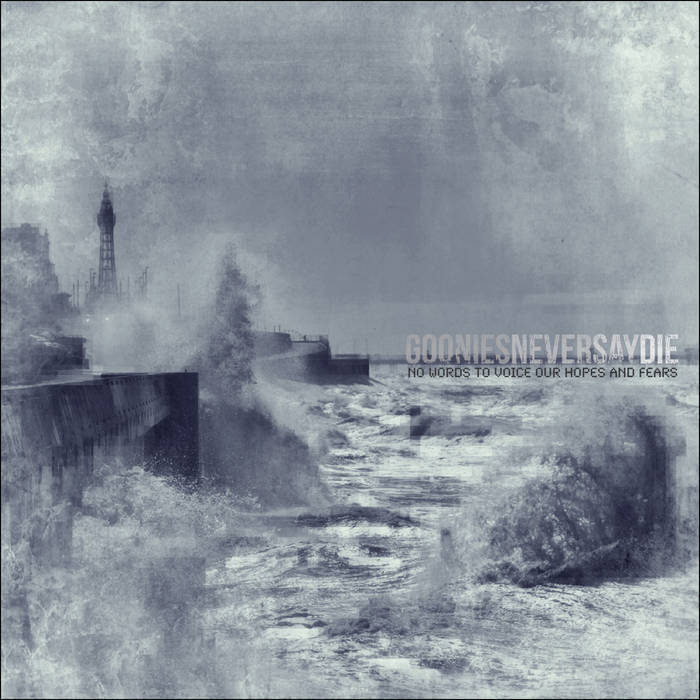 Christopher Melkus More perfect post-rock. Favorite track: Monument To A Moment That Never Should Have Passed.

jamroom Classy UK post-rock outfit with their excellent 2nd album. Favorite track: Monument To A Moment That Never Should Have Passed.

Bursting with promise, overflowing with "wow" moments and played every bit as visionary as it is titled, No Words To Voice Our Hopes And Fears adds an entirely new level to GOONIES NEVER SAY DIE's already-impressive musical architecture. A stunning, intricate, unique and fascinating work of progressive instrumental rock, their second full-length album proffers a facelift to the post-rock scene through not only one grande cinematic journey, but ten self-contained units of sprawling sonic adventure. Through heart wrenching soundscapes of emotion, atmosphere, darkness and serenity, they tell tales organically through instruments that seemingly have their own ongoing dialog...without the distracting crutch of lyrics. It's epic and endearing, triggering feelings without words, pairing echoed guitars and gentle keys with passive-aggressive drum lines to vary the degree of excitement and fear. From its strong opening to its gripping ending, every instrument flows together in an organic yet complex, fluid package. Each track is worthy. Each song has a message. Driving and inspiring yet emotionally trying at the same time, No Words To Voice Our Hopes And Fears will stand out as one of the best instrumental rock albums of the year and securely fastens GOONIES place as ones to look out for. Post-rock par excellence.

"This all-instrumental band of Brits has emerged as the Great Guitar Rock Hope of 2010." - Limewire

"One of the best instrumental rock albums of the year. An excellent, powerful body of work." - Silent Ballet

"An astounding sonic journey that paints an endearing musical picture without words." - Bring On Mixed Reviews

"With their undulating cinematic sound, GNSD is One of 100 Bands You Need To Know in 2010. " - Alternative Press

"No Words is a massive progression from our first album" says guitarist Barry Parkinson. "We pushed ourselves as musicians with new time signatures and tempos, different arrangements and avoided all repetition. None of the new songs finish the same way they start, as they were written from an emotional standpoint rather than a musical one. Instead of asking ourselves where each song should go we asked ourselves how each song should make us feel. It was all about trying to express yourself without having the words to do so" adds Barry. "The last album was a journey from feeling one way at the start to another way at the end. On No Words, each song is a self contained emotional progression, be it from joy to anger or fear to hope...so each song takes you on that same journey but within itself. The new album sounds like the classic second installment of a trilogy. Whereas the first album conveyed the hope and excitement of starting out on a journey, this one is the part when things darken before you see the light at the end of the tunnel. The album gently pushes you into reflecting upon the times in your own life rather than hitting you over the head with words that tell someone else's story. The album is personal, stands apart from its peers and has helped us settle into our own sound and direction. We are very proud of this release" says guitarist and recording engineer / mixer Simon Morgan.

GOONIES NEVER SAY DIE is Barry Parkinson (guitar), Danny Kerr (drums), James MacPhie (piano), Simon Morgan (guitar) and Steven Trenell (bass). Alan Gillhespy performed the spoken word portion on "Of What May Come...' which was written by Barry Parkinson. No Words To Voice Our Hopes And Fears was recorded at Copperknob Studios (Blackpool, England) and Kendal College (Kendal, England) between October 2009 and August 2010. It was produced by GOONIES NEVER SAY DIE and engineered / mixed by Simon Morgan. Deep Elm Records released the band's debut full-length "In A Forest Without Trees" to worldwide critical acclaim in September 2009 as well as a single for "Paul / Sink Jacinto?" in April 2010. GOONIES NEVER SAY DIE will appear on the forthcoming Deep Elm compilation "The Emo Diaries, Chapter 12" with an unreleased song "Those Who Cross The Seas Change The Skies Above Them But Not Their Souls." The band resides in the blustery holiday haven of Blackpool, England.