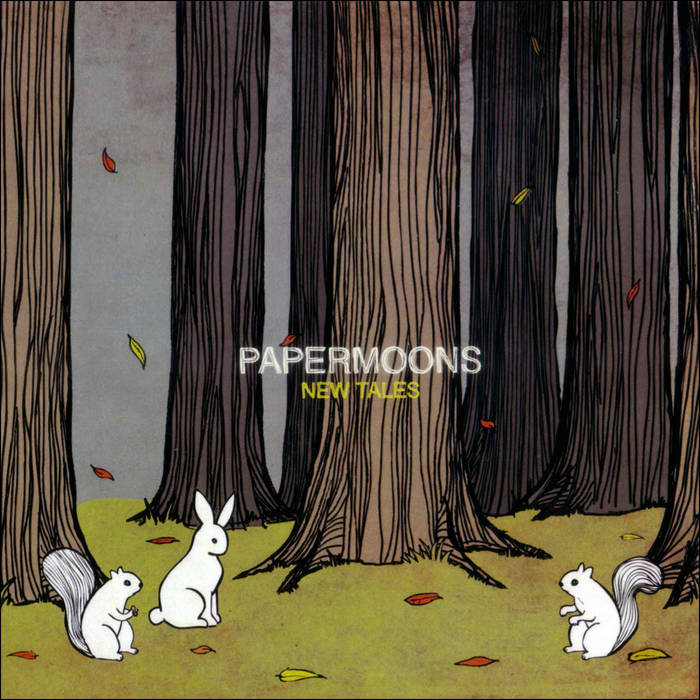 Less is more. It's a philosophy that Matt Clark and Daniel Hawkins of Papermoons understand quite well. The idea that you can say a whole lot more without screaming or shouting is evidenced by the brilliantly constructed songs on their debut New Tales. They use subtle transitions, gorgeous Simon & Garfunkel-esque harmonies, intricate performances and attention to every minute detail to create a unique mid-tempo mix of indie rock and alt-country that is truly captivating. Lyrics such as "I just wanna know / if my life is a joke / cause I breathe right / do I live right?" will capture your attention, your mind and perhaps even your soul. "There isn't a lyrical theme to the record, but more of an array of experiences. What we hope is that the listener can find comfort in our songs no matter their mood. We strive to make music that can both cheer someone up and also console. We've both been involved with playing music for many years now and what has been continually inspiring to us is the way in which music connects people" says Matt Clark. It's impossible to pick a favorite from this impressive collection of songs...because the reality is every single track on New Tales is a winner. Beautifully melodic, innocent songs with undercurrents of sadness and hope, New Tales is an album with no equal. (DER-487)

"The whole experience of the record is heartbreakingly beautiful. Papermoons carry forth the effect of this type of storytelling rather than the format. Theirs' are a fuzzy and indirect outline of the catharsis of pop emotion rather than the crisp rawness of a direct image where often far too little is left to the listener's imagination. Their songcraft and performance is the blocking of light to create a form rather than a dull mirror's reflection of what the artist wants you to see. And because of it, their troubadour compositions, in which the emoticon's parenthesis is almost universally open, come off as genuine, honest and at times utterly heartbreaking. New Tales combines simple (though not simplistic) instrumentation, melodic arrangements and un-ironic observations of the comings and goings of life and love from a universal parapet. There is a worn, almost surrendering authenticity to it, like dirty blond hair on a hot day pony-tailed with a ratty old elastic, cooling the neck at the risk of sunburn. Though the layering of their instruments has an integrated, study feel, even the strongest element, if removed from the hermetic seal of the quiet production and mastering, would seem as fragile as the thinnest piece of model aircraft landing gear. Their skill in communicating rests so strongly in the subtlety of it all. How the slightest change in intonation changes the emotional content of the refrain 'all we are is acquaintances/ all we are is past tense' from insecure statement-as-question to resigned truth, for example. Our personal favorite, from the record and the stage, is 'Lazy Bones', a song with a country root and without a pandering spirit. We could do this for every track, but we often get caught up in a pause, lasting only half a shiver, on 'Holy Cow'; when the drums, bass foot pedal, guitar and harmonica all come in at once, you're left utterly shattered. Heartbreaking is a word that we've been using alot with the Papermoons lately. If you buy one record for a long while, make it this one." - The Skyline

"Four out of five stars! A great record...beautifully melodic songs with an undercurrent of sadness." - Alternative Press

"Papermoons are a fine example of how the capacity of sound emitted from two people ­ with the instruments and vocalizations that best fit them ­ will never cease to amaze me. Sacrilegious though it may sound, the indie folk rock duo from Houstin, TX, are as if Ben Gibbard [of The Postal Service] and Matt Thiessen [of Relient K] made a deal with John Lennon in another life on how to give off a sound style that could be taken apart and arranged by ear in about an hour ­ except not really. Unintended tricksters though they are, said style swaggers unassumingly in a sort of musical sprezzatura, if you will. Layered textures and intricate string arrangements run alongside a lyrical voice that is confident in conveying an understood, relatable naivete." - Beatcave