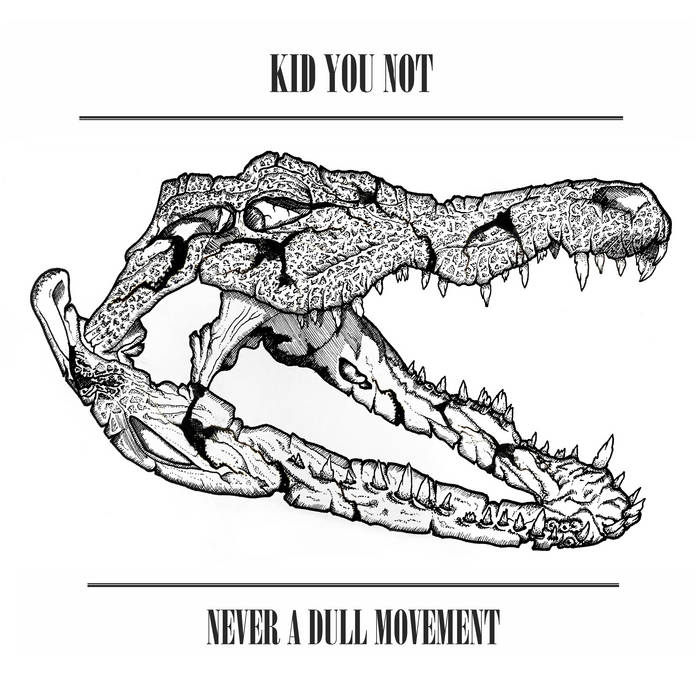 “What do we have left? Seems everything’s been done to death.” Sung from the gut and straight from the heart, the powerful opening line from KID YOU NOT's full-length debut Never A Dull Movement fittingly questions the current state of the music business. And from that moment on, this Florida-based punk outfit answers back with an exhilarating, electrifying, full-on assault that will leave you wanting more. From the first moment of this record, you can feel its brilliance, purity and DIY spirit. Combining new school and old school influences (ranging from Iron Chic, Latterman and Red City Radio to 90’s punk rock heroes Hot Water Music, Jawbreaker and Millencolin) with an exciting new sensibility, Never A Dull Movement just never slows its fury of gruff vocals, melodic harmonies, pounding drums and infectious choruses. It's impossible to deny how engaging and downright fun this record is...the kind of record you turn up and sing along to at the top of your lungs with your fists in the air. An album about love, loss and the feeling of being lost (and not knowing exactly how you got there), it’s also about moving on, accepting the things in life that you can't change and reflecting on the roads that brought you there.

"The album title is about the punk scene in general and the evolution of the punk rock movement. Generation after generation, we seem to slowly change what punk rock can be. Every day there’s a band doing something different, creating a little bit of something new. We all take influences from what we love, and try to turn it into something positive that's our own. That's how the punk scene has evolved from it's original classic sound. It’s always exciting and never dull to me," says bassist and backing vocalist Justin Pritchard.

Guitarist and lead vocalist Patrick Drury continues, "the songs on the album reflect the confusion and sometimes extreme sadness that comes from the constant battles we all fight. The weight of responsibilities that come with age and the realization that life just isn't what you expected it to be, sometimes brings on an overwhelming feeling of nostalgia for the past. At the time, certain life experiences felt like they were such monumental events, but now seem laughable at how they really didn't amount to much of anything. So even when things seem the darkest and most insurmountable, the message of our music is to fight on no matter how much we may want to just give up. So many of us feel the same way and have these same fears, and we're hear to let you know that we can hold each other up...that we can be our own light in the darkness."

One thing is for certain, ten blistering tracks just isn’t enough. Striking hard with purpose, conviction and relevance, Never A Dull Movement is a massive step forward toward not only finding their sound, but also in living their lives to the fullest. If the strength of this memorable debut is any indication of what the future holds for Kid You Not, I can’t wait to hear what comes next. Kid You Not may not save the world, or even punk rock, but fuckin' a...they saved me.

Kid You Not is Patrick Drury (guitar, lead vocals), Justin Pritchard (bass, backing vocals), Ben Bennett (guitar, backing vocals) and Jeremy Austin (drums). All songs were written, produced, recorded, engineered and mastered by Kid You Not at Golden God Recording Studio. Cover artwork by Brooklyn artist Laura Gwynn. A music video for the song "Smoke Another Beer" is currently in production. The band self-released two titled Almost Home (March 2016) and Nothing Was Beautiful And Everything Hurt (Sep 2016). Kid You Not hails from America's oldest city and thriving alligator population center, St. Augustine, Florida.