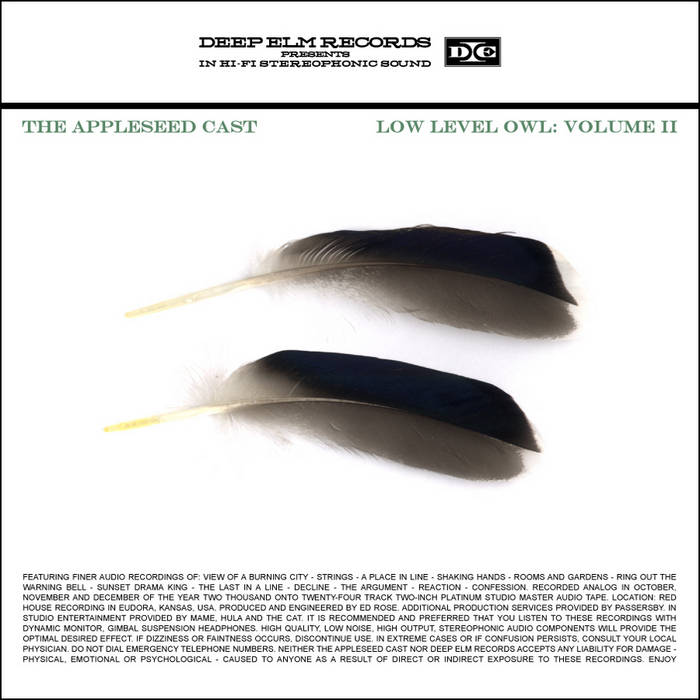 Massive in approach and epic in scope, Low Level Owl is a vast soundscape that lives and breathes on its own. Nearly two hours in total length, twenty-six beautifully orchestrated songs appear on two separate volumes of lush melody, expertly paced dynamics and blossoming atmospherics. The Appleseed Cast gives way to a more courageous exploration of sound and texture on Low Level Owl, experimenting with loops, echoes, instrumentation, inverting tape and changing speeds. They discover the sonic possibilities...the masterpiece in every measure. Each song nearly explodes at the seams, overflowing with symphonics, crescendos, swells of feedback and electronics. Listen to slowly building waves of guitars and drums that ultimately crest, bursting into the shimmering tears of honest men. Music like this is neither calculated nor deliberate. It just happens. It just exists. This is the music to dream to. Volume 1 is available separately.

"Low Level Owl: Volume II from The Appleseed Cast has me floored. This is one of the most engaging emo albums I have ever heard. With interesting interludes between tracks and the more straightforward songs making use of open arrangements and unorthodox studio techniques of the instrumental/ambient songs, the ebb and flow of this album is so natural and beautiful that I hardly know how to describe it. It's like a great movie, and I feel as though I've gone on a long, interesting and beautiful journey. Low Level Owl, whether you're talking about Volume I, Volume II, or the project in its entirety, is easily the emo album of the year. No other band matches the ambition in scope and expertise of execution of the Appleseed Cast. Low Level Owl will likely one day be a revered part of the emo/indie rock canon, so check this out now." - Deep Fry Bonanza

"Starting off as the first volume finishes, Volume II of Low Level Owl is meant to be listened to immediately after the first disc ends, as The Appleseed Cast's latest offering is clearly one work - one immense, lofty and absolutely amazing work. Taking progressive rock in a new direction, The Appleseed Cast will go down as innovators after these releases. The songs are incredibly textured and perfectly produced, and the band experiments with a number of techniques from loops and new drumming styles to intricate instrumentals and ethereal soundscapes. Often, the band breaks off into instrumental periods where they try some of their more experimental approaches, which are thrilling, with tremendous beauty and passion. Complex and beautiful, The Appleseed Cast shows they are on the verge of, if not already achieving, greatness." - Delusions of Adequacy