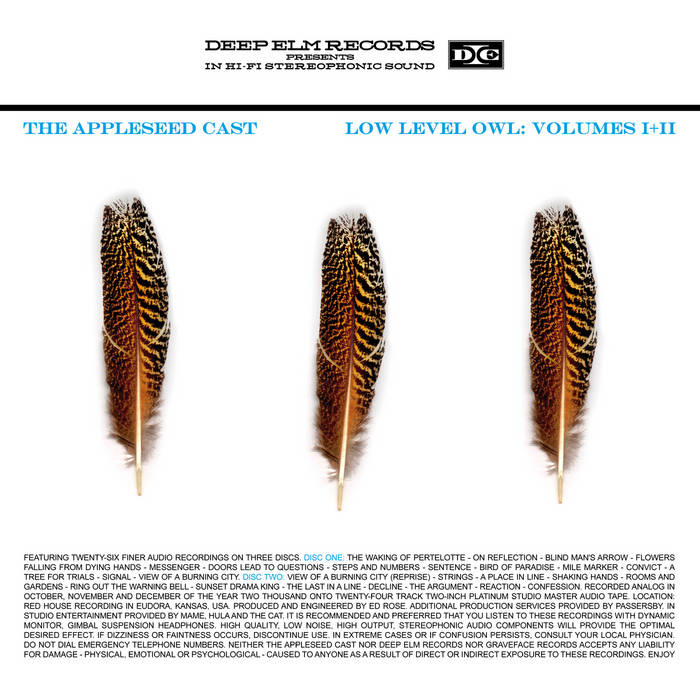 Michiganderik The unique and symbiotic combination of post-rock/"emo" that is nestled within each track of these albums, with or without vocals, continues to significantly contribute to the soundtrack of an epic movie in my mind. Triumphant yet melancholic, turbulent yet hopeful. Favorite track: Steps And Numbers.

barb1378 This is one of tbe best albums I have ever heard. Easily in my top ten of all time. The more I have listened to it over the past 20 years the more I find to love about it. Beautiful, engaging, poetic, dynamic, etc. Such an amazing work of art from a great band. Favorite track: Steps And Numbers.

J Harman This album means the world to me.
more...

To mark the 10 year anniversary of THE APPLESEED CAST's seminal, critically-acclaimed and most popular release LOW LEVEL OWL, Deep Elm Records is releasing both Volumes 1 + 2 together as a complete collection of 26 songs.

Massive in approach and epic in scope, LOW LEVEL OWL is a vast soundscape that lives and breathes on its own. Nearly two hours in total length and previously released on two separate volumes, these twenty-six beautifully orchestrated songs of lush melody, expertly paced dynamics and blossoming atmospherics will leave you floored. THE APPLESEED CAST gives way to a more courageous exploration of sound and texture on Low Level Owl, experimenting with loops, echoes, instrumentation, inverting tape and changing speeds. They discover the sonic possibilities...the masterpiece in every measure. Each song nearly explodes at the seams, overflowing with symphonics, crescendos, swells of feedback and electronics. Listen to slowly building waves of guitars and drums that ultimately crest, bursting into the shimmering tears of honest men. Music like this is neither calculated nor deliberate. It just happens. It just exists. This is the music to dream to.

"Low Level Owl is a supernova and a full redefinition of The Appleseed Cast...a sprawling monster that redirects their ambition from the emotional release of their earlier albums into the meticulous conceptions crafted through endless hours of studio time. Overhauling their sound and incorporating a wide melange of styles, the technical execution throughout the album is flawless. Just the arrangement of the music alone shows the amount of thought that goes into an album of this size. There are hints of Stone Roses, My Bloody Valentine and Built to Spill - all embedded a lush wave of production reminiscent of the Flaming Lips, Spiritualized or Mogwai. With Low Level Owl, they establish their own unique vision for the future of rock, offering hope and brighter possibilities for the genre...or rather, creating their own. It's time to herald The Appleseed Cast for what they are now, and what they're about to become: ground breaking." - Pitchfork

"Low Level Owl is the best music The Appleseed Cast has ever produced, pushing the envelope of indie rock, emo, recording techniques and musicianship into a place that has rarely been visited. Choosing to create a two hour long soundscape of melody, rhythm and emotion, Low Level Owl's twenty-six tracks do not divide the album up into abrupt fragments, but rather act as road signs guiding the listener through a seamless sonic journey. They should not even be considered as moments of expression and emotion. Each moment bleeds effortlessly into the next leaving the listener to make distinctions between the changing concepts and ideas on their own. Low Level Owl is a product of love, imagination and devotion that can only come from a band that has the one simple goal of making music. You have to listen to The Appleseed Cast yourself to understand. Low Level Owl is an amazing display of music." - RockKansas

"Low Level Owl from The Appleseed Cast is the 20 year-old bottle of champagne equivalent to music. Both epitomize perfection to those people who have the refined taste to appreciate them. In terms of quality, there is simply none better. In that sense, the Appleseed Cast have composed one of the finest pieces of music this generation will ever hear. This album is mellow; it's multi-faceted; it's poetic; it's full of imagery and emotion. For maximum enjoyment, you've got to lie back, close your eyes and absorb it. The Appleseed Cast have redefined the genre that has been redefined more often that it has been adhered to, and I'm pretty certain there isn't another band out there like this one." - Punk International

"The Appleseed Cast is romantic, airy, deep, wooing, heartfelt...there are so many words to describe Low Level Owl. It is instrumental bliss, pure feeling and intensity. Listening to this flowing album is an incredible experience. I expected nothing but the best from these guys and that is exactly what they delivered. The most notable song on the album has to be Steps And Numbers...the lyrics just hit you and leave you in question and wonderment. Very powerful stuff. This is a definite must for anyone that enjoys having a few moments alone to ponder life and everything involved." - Punk Bands