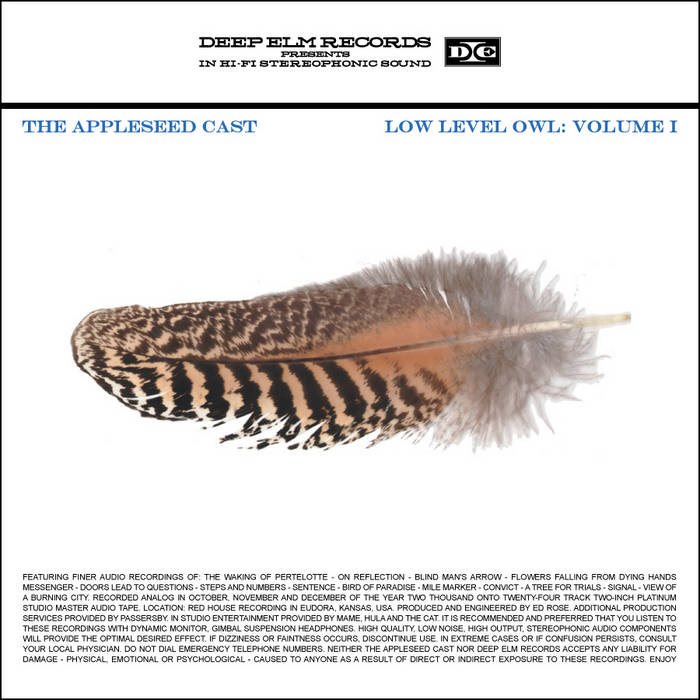 Massive in approach and epic in scope, Low Level Owl is a vast soundscape that lives and breathes on its own. Nearly two hours in total length, twenty-six beautifully orchestrated songs appear on two separate volumes of lush melody, expertly paced dynamics and blossoming atmospherics. The Appleseed Cast gives way to a more courageous exploration of sound and texture on Low Level Owl, experimenting with loops, echoes, instrumentation, inverting tape and changing speeds. They discover the sonic possibilities...the masterpiece in every measure. Each song nearly explodes at the seams, overflowing with symphonics, crescendos, swells of feedback and electronics. Listen to slowly building waves of guitars and drums that ultimately crest, bursting into the shimmering tears of honest men. Music like this is neither calculated nor deliberate. It just happens. It just exists. This is the music to dream to. Volume 2 is available separately.

"An experiment that could only result from following one's heart, Low Level Owl: Volume 1 from The Appleseed Cast is a beautiful quilt of varied musical textures. Carefully layering simple, clean riffs over delayed single notes to create multiple harmonies melded with thunderous beats and nearly hypnotic loops, this recording gives sound and space dimension seldom stumbled upon within the recording studio. Intricately decorated with sparse arrangements of guitar and piano, this record is based on the fact that the vibe comes first and foremost and that every instrument is just that...an instrument, a tool to establish a greater whole. This record stands on its own." - Punk Planet

"Low Level Owl is a supernova and a full redefinition of The Appleseed Cast...a sprawling two-disc monster that redirects their ambition from the emotional release of their earlier albums into the meticulous conceptions crafted through endless hours of studio time. Overhauling their sound and incorporating a wide melange of styles, the technical execution throughout the album is flawless. Just the arrangement of the music alone shows the amount of thought that goes into an album of this size. There are hints of Stone Roses, My Bloody Valentine and Built to Spill - all embedded a lush wave of production reminiscent of the Flaming Lips, Spiritualized or Mogwai. With Low Level Owl, they establish their own unique vision for the future of rock, offering hope and brighter possibilities for the genre...or rather, creating their own. It's time to herald The Appleseed Cast for what they are now, and what they're about to become: ground breaking." - Pitchfork