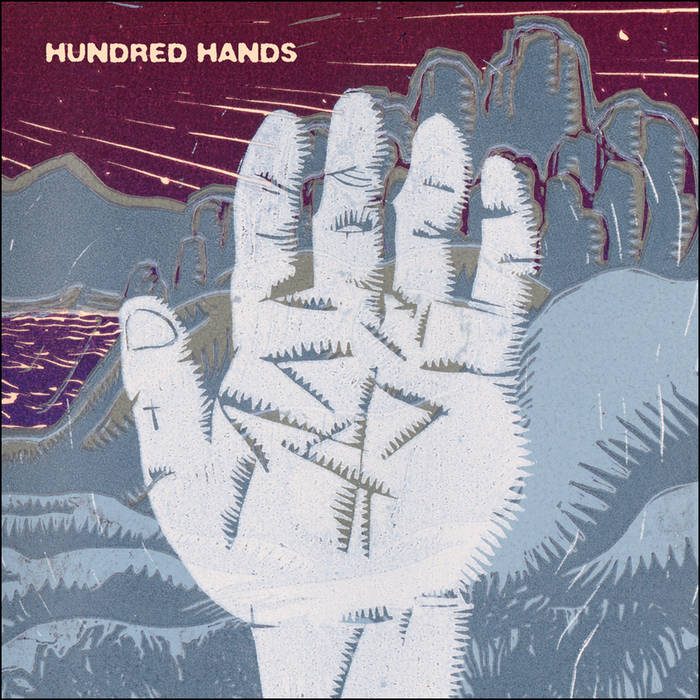 leaaves great EP. the follow-up was miserable, but this is actually great great great.

Led by Aaron Pillar and Christopher Crisci (founding members of The Appleseed Cast), Hundred Hands pilots the listener through a complex journey of exquisite musical landscapes, glimmering melodies and warm, pulsing, beautiful instrumentation. But this time it's Aaron who takes center stage on vocals. Little Eyes pulls at the right parts at all the right times - the texture, the feel, the sound of everything - creating a surrounding that is abundant in introspection and sonic inspiration. Little Eyes is flawlessly executed. With producer Ed Rose on drums / percussion, this trio of post-hardcore heroes can do no wrong. (DER-393)

"There are amazing moments in time when a band like Hundred Hands slips out of the gate with an album that is so sublime, its beauty so stark and naked, that you have to pause for a moment from finding divinity in the bottom of your drink to ponder its elegance. Little Eyes is steeped with a dreamy mid-tempo intoxication that won't be dismissed, and the record does more with its six songs than many bands do over six albums. Its sparse instrumentation and cathedral hall recording production gives the listener a dreamy intimacy, a quality that alone can conjure an emotional hiccup. And like many of the other songs inside the Deep Elm jukebox, its grooves feel like the worn, familiar grooves of the bar you're seated in front of. And so you slip another dollar in the jukebox and order another drink; alone but content, quietly pondering Little Eyes' beauty." - Ear Pollution

"Hundred Hands are well versed in the mood-inducing sweet simplicity of pop; there is subtle beauty in crisp, haunting guitars, and emotional grace in a voice that sings as opposed to recitation. Little Eyes is a record of a most lovely nature...restrained yet emotionally provocative, the six songs are bound to appease fans of the Deep Elm ranks who will be more than delighted at the bountiful beauty Hundred Hands have given us. Slow and steady is the name of the game here; drums that pound with intensity with each soft chord; vocals that ease hauntingly into the mix; and absolutely gorgeous guitar plucks that reverberate with each note. This is a beautiful affair. Blissful without arrogance and divine in its beauty, Little Eyes is an example of a project I would be delighted to hear more from. Really nice offering from a label that knows...well worth your time." - PunkRocks

"There are few people in the world who can construct lush soundscapes quite like Aaron Pillar and Christopher Crisci of The Appleseed Cast, and here we find Pillar fronting Hundred Hands, conjuring up six more tracks of shimmering melodies on Little Eyes for the more plaintive among us to sigh and weep to. This is top quality stuff, and the production is rich and full, with their twinkling finger-picked guitars and gently swaying arrangements captured beautifully." - Kerrang