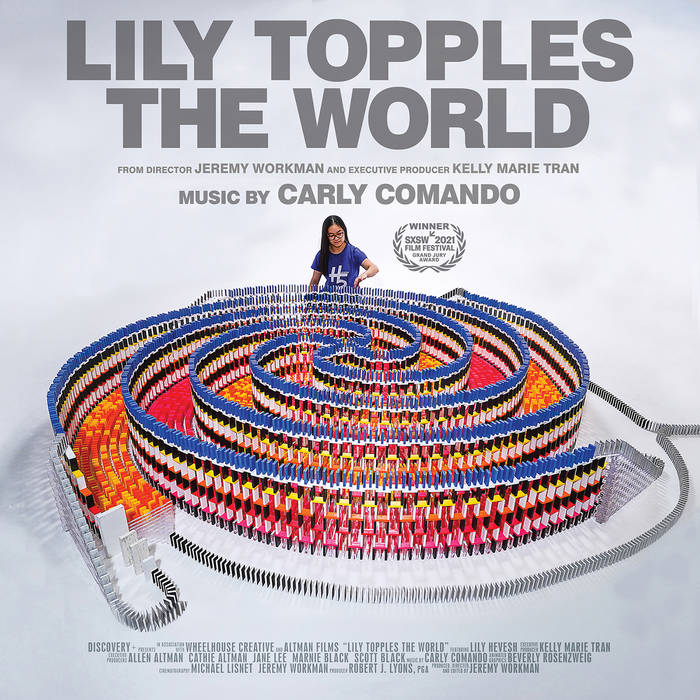 "My goal in composing the custom score tracks was to bridge Lily’s story and director Jeremy Workman’s directorial vision without getting in the way of either. My characteristic style is melodic minimalism, usually going with the idea I come up with in the first take. I wanted to make sure the music supported the storyline in tone and energy versus telling the viewer how they should feel at the time. Every song in the score is my favorite child, but the one that sticks out the most is the first piece I decided to work on titled Washington. I got lost and entranced in the scene and the first notes I played are the ones that set up how I’d write the rest of the song. I love when a composition works on the first try because it’s the first thing my brain created without thinking too hard about it. That moment really felt like I was watching the film and my hands were working without my head. When I get lost in a scene, the music just writes itself. Once I had the major melody set up, I began adding in little references to the dominos falling in real time. I also mixed in a little toy piano sound in the melody of the piece because there’s so much sweet, innocent childlike wonder in the art that Lily creates despite her immense success as an adult," says Carly.

Carly continues, "I have been gushing about Lily Topples The World ever since I viewed the first unedited draft. I remember sitting down with it at the beginning of the pandemic and balling my eyes out in the best way possible. I was so inspired by Lily’s story and as an artist, another human being on earth following her heart and drive to create in her authentic way, and despite the odds, thriving. Seeing another artist’s ups and downs is incredibly relatable and helps people like me not feel alone. It made me feel seen. In the beginning of March 2020 when I endured numerous cancelled tours for my band Slingshot Dakota and cancelled musical projects due to the uncertainty of film / tv, I really started to question my purpose in music. Right around this time, Jeremy sent me his draft of the film and it was one of those moments where you feel like the universe is sending you a sign that you’re doing exactly what you should be doing! Not only because he believed in me to help tell Lily’s journey musically, but because her story alone gave me the strength to not give up on myself. This film will always hold a special place in my heart for the strength it gives to ALL artists and anyone who differs from the norm."

The score was produced, performed, engineered and mixed by Carly Comando in her private studio. Mastered by Todd Schied. Photo by Laura Murray. Carly's discography includes "Everyday" (single), "Dreamlife" (full-length), "Clarity" (triple single), "One Take" (debut full-length), "Cordelia" (ep), "Everyday 2.0" (single), "Every Moment" (single) and "Circadian" (single for viral video with 12+ Million views, youtu.be/wAIZ36GI4p8). All recordings have been proudly released on Deep Elm Records. Carly also plays keyboards and sings in Slingshot Dakota. Carly also recently composed portions of the score for the film "The World Before Your Feet" (Executive Produced by Jesse Eisenberg, Produced by Jeremy Workman), which has won accolades worldwide (4 Stars from Roger Ebert / 100% rating on Rotten Tomatoes). Carly resides in Allentown, Pennsylvania with husband Tom and corgi Kevin. And yes, that is her real name.

Carly's well-recognized piano ballad "Everyday" is the score to nearly 200,000 videos on Youtube alone including numerous of viral videos such as One Photo A Day in the Worst Year of My Life (62+ Million views, youtu.be/Ertu9_MhFiM), Noah Takes a Photo of Himself Every Day For 6 Years (27+ Million views, youtu.be/6B26asyGKDo) and the NBA's classic “Where Amazing Happens” campaign. Carly's music has been used in ad campaigns and television commercials for the 2022 Beijing Olympics, Comcast, McDonalds, Bombas Socks, America's Got Talent, Amnesty International, Pasteur Institute, The Simpsons, Petcurean, Vodafone, Canon, Channel 4 UK, Philips and many more.

"This is music that changes lives, opens minds, broadens horizons. An amazing pianist." - ANA
"Beautiful and soothing, evoking emotions to ease scattered minds. A talented composer." - SweetieJo
"Emotional and inspiring, she grabs your soul and moves you. Highly recommended." - The Rez