It's Fun To Do Bad Things 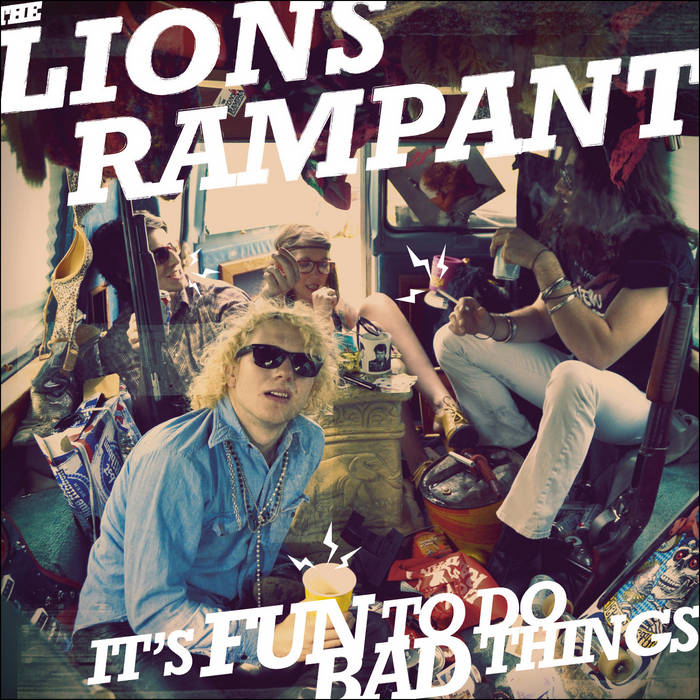 Sacred Wolf Great album for fans of some good Rock and Roll. Favorite track: Do You Feel It?.

Letting your freak flag fly at more than half-mast is a way of life for The Lions Rampant. This edgy, blues infused, garage rock, pseudo pop three-piece sings their way through a storybook of life's ups and downs with unfettered energy, mauling the Midwestern music scene and dragging it right back where it belongs: in your face. It's Fun To Do Bad Things, their full-length debut, is a testament to what it's like to be youthful, adventurous and carefree...without sparing any of the gritty details. With the spice and drive of 60's guitar licks and lyrics not unlike those of The Clash, The Lions Rampant breathe new life into the scene with a collection of crisp and wildly soulful melodies that will whisk your rock-ready ears back a few decades. But fear not, It's Fun To Do Bad Things promises a lasting rock fix that delivers again and again...timelessly, like their influences. The Lions Rampant remind us what rock and roll is truly about at the most organic of levels. (DER-495)

"The Lions Rampant fear not the garage shtick label, with their could-be obnoxious album title and self-proclaimed vintage rawness. Fortunately, not only does their bravado fit, but their debut full-length is good enough to elude a mere trend-spotting drive-by. On standout tracks like "Lights On" and "I Need (Your Love)," they're trading the genre's prioritized attitudinal aesthetic for songwriting exploration, Pixies-ifying the Rolling Stones' stolen Southern swagger and soaring through some transcendent power pop melodicism. Their blues punk howl often evokes the modern forefather Jon Spencer. But on the clean, foot-stomping, mid-tempo, self-titled track, with its hand claps and bridge of swirling psych pop organs, The Lions Rampant show that their strongest stuff is underneath the layers of bluesy mania, when their real pop sensibilities are bright enough to shine through." - Exclaim

"Ever since their formation in Cincinnati six years ago, the Lions Rampant have worn custom-made lion suits onstage as they churn out the most visceral and joyous garage-rock imaginable. The idea was that the outfits would make the band look so ridiculous, they'd have to work even harder to prove themselves to an understandably skeptical audience. That hard work has finally paid big dividends: The band's new album, It's Fun to Do Bad Things, is a marvel of primal garage-rock laced with deep-fried soul, swirling psychedelia and snarling blues riffs. Onstage, the Lions Rampant sweat, swagger and swing with the rafter-rattling abandon of early Stones and Kinks, shot through with enough contemporary spit to spark the pleasure center of Strokes fans. At their shows, dancing shoes are a necessity, exhaustion and a three-day grin are possible, and a great time is all but guaranteed." - C-Notes

"With song titles like 'All Night RNR' and 'Cigs & Gin', The Lions Rampant aren't trying to in anyway hide the fact that they live and breathe the rocknroll life. Hailing from Northern Kentucky, these guys are playing a sort of blues/garage rock that bands like The Black Keys or John Spencer Blues Explosion made careers out of, though The Lions Rampant add some 70's rock influences and a whole lot of rowdiness to the formula. This debut is chocked full of dirty, gritty rocknroll with all the attitude, flair and fun that comes with it. The guitar riffs and energetic singing from frontman Stuart Mackenzie make this first effort worth the wait. After a couple of highly praised EPs and nominations as the best band in Cincinnati, these guys are already well praised in their part of the country. Now add Deep Elm's untarnishable reputation of delivering legions of great music and there's no doubt The Lions Rampant are going to be revered everywhere very soon. For fans of: The Izzys, Mudhoney, The Stooges." - Go211