In A Forest Without Trees 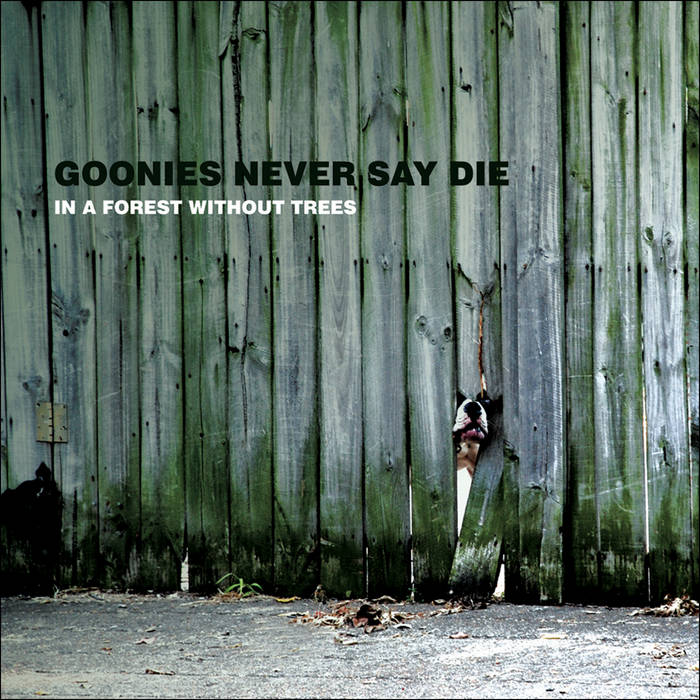 Naphicus Pick up a (physical) photo album from a good trip, grab a drink, put on this record on and take a seat. Allow the riffs and various rythm patterns to transport you into memories chock-full of hunger, restlessness, searching and consumation. Somehow GNSD achieve this effect to perfection on both of their albums I own. I love their sound. They make (my) life quite more meaningful through their great music. Favorite track: Don't Fight The Fire, Fuck The Arsonist.

Cinematic is as dead-on as any reasonable description for the fifty minute instrumental debut by Blackpool, England's Goonies Never Say Die. An adventurous, stunning piece of work, In A Forest Without Trees is an intricate mixture of progressive rock and atmospherics doused with an emotional to and fro that pulls and releases in all the right places. Balancing lush, minor landscapes of sound with big swathes of noisy, fire-peaked crescendos, Goonies make the quieter bits sound every bit as compulsive as the explosive highlights. This is headphone music at its finest: swelling dynamics, colorful interludes, thick melodies...like a fireworks display, only sometimes in slow motion. "There is really no constant theme to the album. It was written as ten separate pieces of music, hence the emotional rollercoaster theme to it all" says guitarist Barry Parkinson. "There are happy moments and sad moments...pretty much the way life is really. We wanted the album to remain open to interpretation" says Parkinson. Truly a remarkable debut. (DER-483)

"100 Bands You Need To Know in 2010: Their celestial sway, tidal flows and undulating cinematic sound attracts fans of instrumental post-rock. 'By the time we were playing gigs and started to get quite popular, it was a bit too late to add a singer' says Goonies Never Say Die guitarist Barry Parkinson. 'That whole post-rock genre wasn't an influence; we just fell into it, but as we've gone along, we started writing more as an instrumental band than just a band without a singer.' When they posted In A Forest Without Trees online, they were surprised to attract interest from listeners as far away as Russia, Japan and China. 'We had 12,000 downloads in two hours. It crashed our website,' Parkinson says. It also attracted long-running indie label Deep Elm, which signed them and will release the follow-up to In A Forest Without Trees in September." - Alternative Press

"The awesomely-named Goonies Never Say Die are a post-rock band hailing from the legendary land of Blackpool. The watery guitars of 'Don't Fight The Fire, Fuck The Arsonist' recall Isis' most relaxed moments, while 'When Middle Eights Migrate' builds to a fantastic Tool-esque heaviniess. The highlight is 'Sometimes It's Not So Bad,' a classic post-rock blissout that rivals anything off Explosions In The Sky's latest album. For fans of Explosions In The Sky, This Will Destroy You, The Appleseed Cast." - Rock Sound UK

"Goonies Never Say Die's debut instrumental album, In A Forest Without Trees, leads the listener through an enigmatic post-rock collection of emotion, atmosphere, darkness, serenity and art. The heart wrenching, six-minute 'Don't Fight the Fire, Fuck the Arsonist' tells tales through music that vocals would only distract from. It's epic and endearing, capturing ideas without words, pairing echoed guitars and gentle keys with passive-aggressive drumming without ever sounding overly complex or exclusive. The album captures that lost-in-a-forest feeling, with varying degrees of excitement and fear coming alive on noisy closer 'I Know, I Know, I Know.' With every brush stroke, I become more aware of their natural ability to not only reflect on organic creativity, but to also inspire it. With cinematic cascades and lush landscapes, this album is beautifully stunning and full of great promise." - Exclaim