I Found Myself Asleep 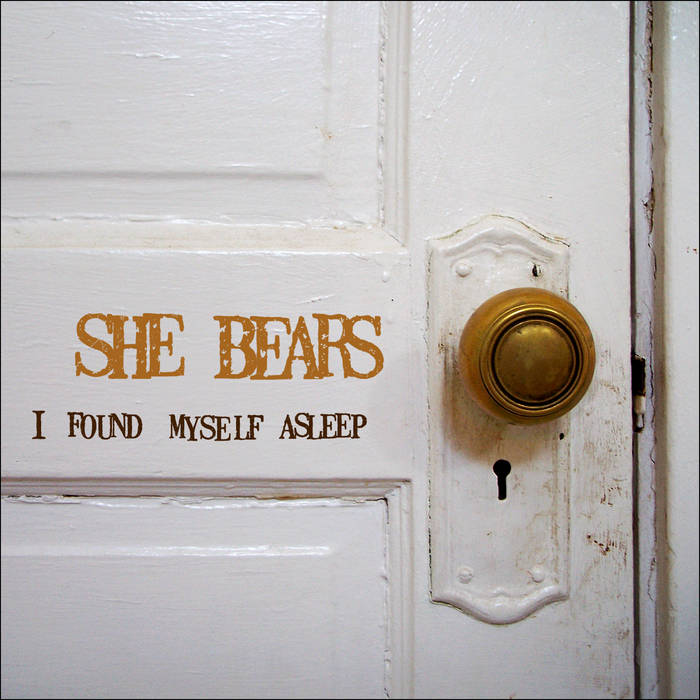 Don't be fooled by the warm welcome. She Bears aren't just here to entice you with memorable lyrics and catchy refrains. That's not their aim. Layering their debut I Found Myself Asleep with crushing piano melodies, powerful guitar work, subtle electronica and diary-relatable lyrics, She Bears claim ownership of their own undeniably honest brand of musical mastery. This energetic indie rock six-piece finds themselves immersed in a menagerie of life's ups and downs, lifted hearts and letdowns. Exploring the raw reality of pushing through life without knowing where one's path may lead, She Bears succinctly capture the feeling of young adulthood. Internal dialogue is never expected to be shared or delivered with such emotional connectedness, but these young bears chronicle such personal moods effortlessly. "We leave a lot to the listener to figure out for the sake being as truthful as possible. Life is never given to you in a scheduled format. There is a lot to be learned on an individual level," says vocalist Stephen Pence. "The lyrical theme of the record basically comes down to the idea that when you aren't paying attention to life, whether positive or negative, you may miss valuable lessons...things can get by you." This record not only finds your ears, but also your heart with a powerful dose of what it means to search, feel and pray to come out on the other side of life victorious. (DER-500)

"She Bears claim some well-deserved attention with 'I Found Myself Asleep', a debut album so full of ideas and melodies that other acts might have turned the material into two albums. Not so for this six-some out of Ohio who start off constructing their songs with a solid indie rock foundation and then proceed by adding piano, electronica and a mess of unexpected twists. Or maybe they start out the other way. Not sure. But it doesn¹t really matter. What matters is that the songs on 'I Found Myself Asleep' sound full and elaborate yet are concise and catchy at the same time. Arcade Fire and Of Montreal are acts that come to mind while listening to songs like opener 'Victim Of Circumstance', a song in which you are instantly drawn to the dynamic piano playing of Caitlin McGlade. Another highlight is 'Black Mannequins' which slowly builds up to a maniacal and completely riveting finish. These five guys and one girl are brimming with ideas and enthusiam. On "I Found Myself Asleep" they manage to pour all that into ten songs that carry out energy and fun...two qualities that help make an album great." - Punk Rock Theory

"She Bears finds inspiration in some of the past decade's biggest indie innovations - Arcade Fire, Of Montreal, and Wolf Parade come to mind - and they do this all while balancing instrumental ambition with a gripping catchiness. Needless to say, the band's six members keep themselves very busy. She Bears' boasts a concise but diverse sound, best described as simple mix of piano and electronica accompanied by a full-bodied indie rock vibe. 'Victim of Circumstance' opens the record, instantly introducing listeners to Caitlin McGlade's dynamic piano work and a subtle eletronic backdrop. Furthermore, Stephen Pence's narrow Wolf Parade informed vocals rest at the center of the swirling soundscape, feeling as if they are being urged on by the enthusiasm of his bandmates. It's as if Pence calmly sits at the center of a rhythmically propelled tornado, but only cautiously observes the surrounding excitement...as if he were in a trance, mesmerized by the awe of neighbouring beauty. But I Found Myself Asleep doesn't just hypnotize, it also showcases a band daring to dream big and throw a wrench into the usual indie machine. For example, 'Planes' throws the listener from gentle melody into a barrage of punding keys. Furthermore, 'What Morning Brings' wasting no time introducing a menacing electronic scaling, effectively signaling a lurking urgency. Moments later the soundscape calms, but the threat of return looms overhead. But that's what makes She Bears such a fun listen: they maintain a soothing quality without shying away from excitement. And unlike many of their contemporaries, by the half way mark She Bears still has plenty of offer. For example, tracks like 'Black Mannequins' offer a welcome curve ball quite late in the game. As far as debuts go, I Found Myself Asleep establishes She Bears as an animal to be reckoned with. She Bears never lingers in the little things, but always develops engaging and nuanced material as one and the same. Those tired of indie acts masquerading tedious, soul-less works as profound need look no further." - The Punk Site

"The ever consistent Deep Elm label celebrates it's 150th release milestone - a feat commendable by any label, especially one that has reached this landmark on a completely DIY, independent ideology - with Athens, Ohio's 6 piece stalwarts She Bears. She Bear's unique brand of dynamic indie rock couldn't be anymore fitting for this monumental release. The band's powerful guitar work, introspective wordplay and sincerity really complement what the label has done since its inception and if Deep Elm ever had to succumb to being tagged with a particular sound there is no doubt She Bears would exemplify this perfectly. Usually bands as large as this relegate some members to being, well, less prominent than others. With She Bears every member stands out, with hard hitting piano melodies, layered guitars, crashing percussion and cathartic singing. She Bears should be the next big thing. " - go211