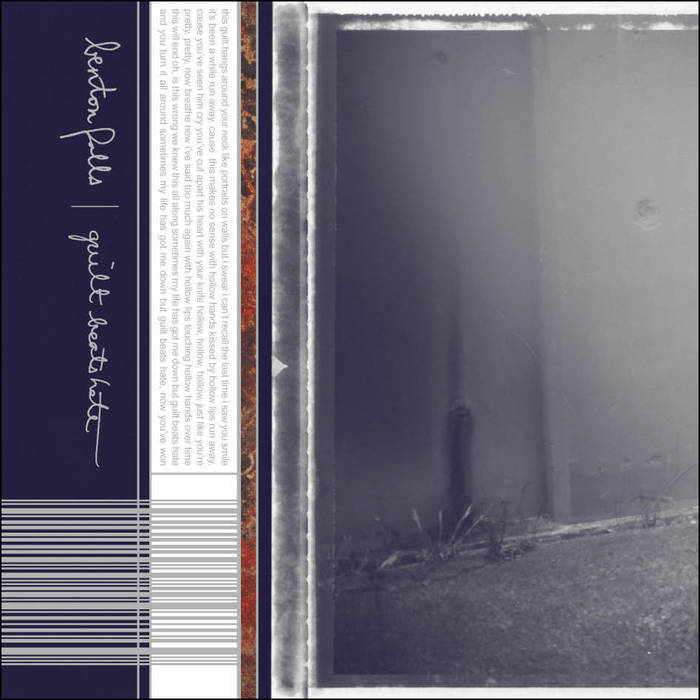 Benjamin Jas. Baker I observed this band over a decade by now, since the afsp compilation was on clearance @ HotTopic.com. They make me feel like a living testament to something... Favorite track: Like Portaits On Walls.

This Santa Rosa-based threesome doesn't sacrifice volume for intimacy, creating a hailstorm of songs on Guilt Beats Hate that are as brutal as they are tender. Intelligent, electrifying and addictive, Benton Falls fuse together disparate genres to compose songs with lush, luminous segments that shatter unpredictably with bursts of aggression and intensity. They alter tempo with impeccable precision and startling tightness (their most identifiable aesthetic), teetering dynamically between introspection and rage. Richardson's glistening voice, impassioned screams, penetrating lyrics and sharp guitars combined with deftly deployed drum sounds and thunderous bass lines result in masterful narratives about frustration, struggle, uncertainty and inevitability. Guilt Beats Hate is a breath of fresh air and dazzling display of maturity that will be appreciated by both hardcore and post-punk fans for many years to come. (DER-422)

"Nothing could prepare me for Benton Falls' latest, Guilt Beats Hate. From the very first track, this album is intense and explosive, yet every song reaches out like a gentle, reassuring pat on the shoulder. It has everything; crushing guitars that leap into wild variations and then dive into soft plucking, vicious screams and an intensity that dares not let up. Every track is like a dark car ride; no one knows where they're going except the driver. Guitars and drums beat incessantly, building up to the point of no return and then cascading down with a burst and blast of energy. Benton Falls stands apart from their contemporaries by their sheer willingness to make music that sounds at once caring and hopeless. We live in an era of ambivalence, wanting to change our ways without altering our standard of living. Benton Falls reflect these thoughts with style and grace." - Pirate Nun

"Benton Falls have found their sound, and it's all so right as I listen to Guilt Beat Hate for the umpteenth time today. Their sound has been refined, improved and given a lot of more oomph. Benton Falls takes the blueprint of impassioned indie-rock and adds thick, loud riffs, pounding drums, tempo changes and screaming / soaring vocals to quite an inspirational effect. Within 30 seconds I just know I'm going to love it. It's a fine testament to Benton Falls that the quality on Guilt Beats Hate is high from start to finish, and yet there is still space for stand out songs and moments. This album will appeal to everyone with Deep Elm records in their collection, but this will also appeal to people everywhere who aren't familiar, proving quality music prevails in the end over preconceived ideas, which has to be a good thing." - Collective

"It's the subtleties on Guilt Beats Hate that set Benton Falls apart from the rank amateurs and derivative hacks. Racing, punk-informed passages distinguish them from traditional slash 'n' crash post-hardcore bands while the guitar riffs during the verses are quite creative, escalating the tension of the rhythm section. The screaming never becomes a trite way of making a chorus more emotional, but instead sounds like a natural eruption, akin to Jeremy Enigk's more angsty moments on Sunny Day Real Estate's Diary. Guilt Beats Hate is one of those albums that breeds a special attachment. Benton Falls knows the dynamic of a powerful song, and their heartstring plucking heroics lend meaning to the oft-maligned emo tag." - Splendid