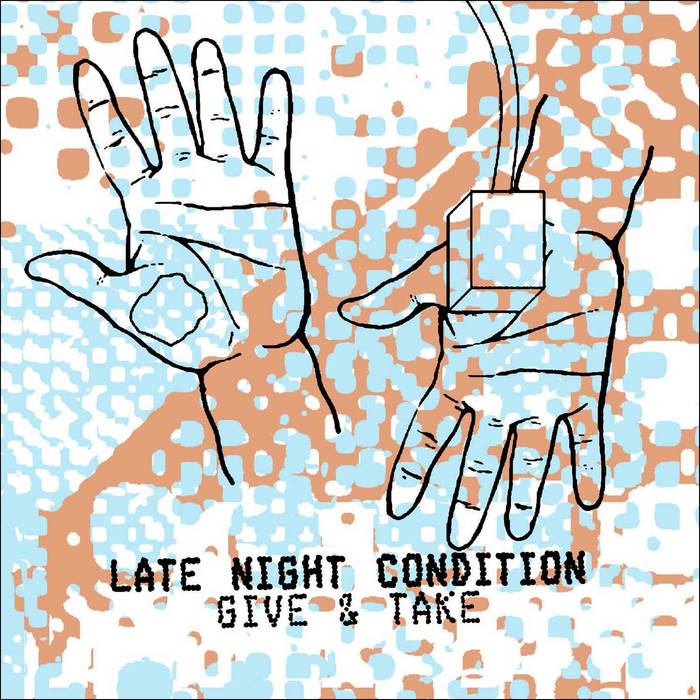 Late Night Condition's smart, punk-derived pop is potent in its simplicity, glimmering steadily beneath Give & Take's theme of emotional adversity and hardship. Overflowing with catchy modern rock guitar riffs, pounding beats and expressive vocals that combust these radio-friendly cluster bombs with their emotional urgency, it's almost as if LNC has set out to help their listeners find comfort in the darkness. It's this exquisite balance of complacency and misery that you can't help but get caught up in...even when it's delivered all the way from Buenos Aires. With lyrical references to fantasies, nightmares, dreams, restlessness and even painkillers, this album comfortingly chronicles many of the "late night conditions" shared by us all. "We've all been in love, had our hearts broken, lost a good friend, knew betrayal, defeat, anxiety. We've all had something that made us happy or sad. I just describe how I feel and how I think most people feel when they are going through those emotions. Music itself also inspires us to make music. It's endless and it never hurts...or maybe it does hurt. But when it's done right, it hurts soooo good" says vocalist Alejandro De Gennaro. Give & Take is polished, smooth and solid...the kind of debut every band tries for, but few actually deliver. (DER-484)

"This is a beautifully produced debut album from the Argentinean four piece. Freshly under the wing of the highly selective Deep Elm Records, they give us a delightfully polished offering. A masterfully structured album, Give and Take is packed with life and vibrant energy. The sound is streaked with sunshine, although the lyrics are bitter and emotionally packed and the vocals swim yearningly throughout. It is definitely from the heart, which is a rarity in this cynical, grey, concrete world. Deviations in key and tempo add texture and slash us way from the monotony of the comfort zone. The guitar sound is rich and driven, often melodious and bright and lifts the melancholic grit of the vocals fluidly. Alejandro De Gennaro's accent is palpable, especially during the first couple of songs but this adds interest and is completely endearing. The lyrics are accessibly simple allowing De Gennaro to effortlessly hang his vocals across them. Singing of nightmares, love, hatred, anxiety, betrayal, defeat, painkillers and lost friendships the words take us to places where the feeling is familiar and cranks open our souls with his searching honesty. Give and Take is brimming with anthemic choruses and although it is wracked with heartbreak, it is an incredibly uplifting album. The deliciously slick production and the full rich sound celarly depict the vigilantly crafted journey that the album takes you on and the evident soul that laces De Gennaro's tortured, yet versatile vocals all makes Give And Take an album worth discovering. Particular highlights for me are 'Nightmares' nestled in the very middle of the LP. It swings perfectly between laboured restraint and glorious balls-out crescendos. The bass can't be contained and gleefully bubbles up to the surface. I also love the rawness of 'Everything for a Kiss' with its ethereal glaze, and how the album suddenly shudders into the epic sweeping choruses of 'Painkiller' with it's almost typical rock verses splintered by discordant juddering guitars, which later becoming spasmodic. The honesty of this album makes it impossible not to fall for. The themes, the sounds, the style is all comfortingly familiar, and I believe they have the passion and the talent to be quite exceptional and unique. I have a feeling that their best is yet to come." - Alt Sounds

"I'm not sure how Late Night Condition has remained under the radar, cause their mix of alternative, grunge, punk and modern rock pretty much parallels anything in those genres that has been co-opted by the mainstream in the past two decades. Hailing from Buenos Aires, Argentina, 'Give & Take' - the bands debut LP - undoubtedly will garner Late Night Condition new fan worldwide thanks to their alliance with Deep Elm Records who are also reissuing their oroginal four song EP tiltled "Midnight Confessions.' A very polished effort, 'Give & Take' is full of endless modern rock guitar riffs, silky smooth vocals and meticulously detailed punk inspired pop songs about defeat, anxiety, betrayal and losing good friends. Gritty enough for the world of fiercely independent rock but also radio friendly enough to appeal to anyone with a penchant for anything related to rocknroll, Late Night Condition could easily be the next big thing. As a reference point, think Alkaline Trio if they lived in Seattle in the early 90's and recorded on Sub Pop. For fans of: Anberlin, Brand New, Copeland." - go211