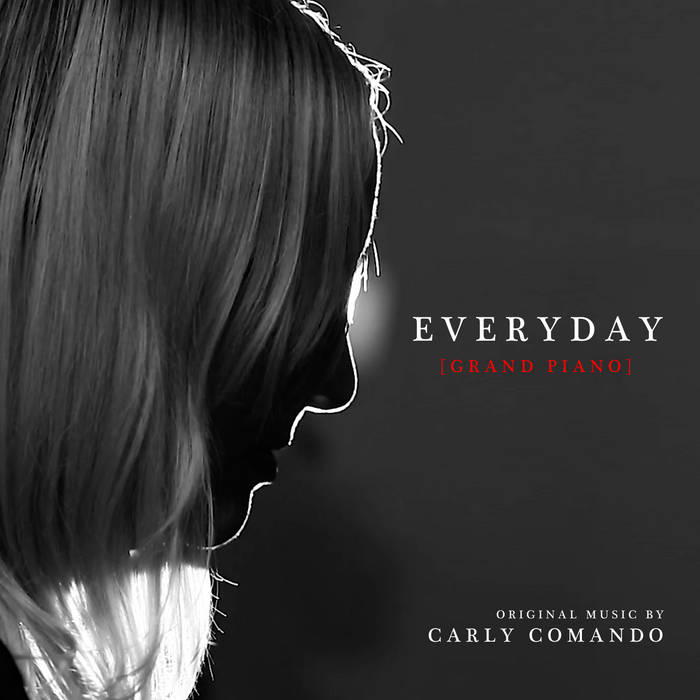 Eloquent, gripping, poignant, thought-provoking, memorable. These are some of the words most frequently used to describe the achingly beautiful music of cinematic pianist and Primetime Emmy Award-winning composer CARLY COMANDO. Well known throughout the interwebs for her viral piano ballad "Everyday" (which receives 100+ Million cumulative plays per year on Youtube), a stunning new Grand Piano version of "Everyday" will be released on November 3, 2017 in connection with a video of Carly's first-ever publicly released performance of this popular, powerful and inspirational classic. The heart-stirring black and white video will premier on the HDSounDI Youtube channel and is sure to please fans and pianists around the globe have been requesting a video from Carly for over ten years. A cathartic release of emotions, the original recording of "Everyday" came straight from Carly's heart right to the piano…literally in a single attempt (hence her debut album title "One Take"). What was played is exactly what you hear. Running the gamut from powerful to gentle and sweeping to sparse, "Everyday" is as perfect for the big screen as it is for personal enjoyment.

"Everyday reflects my conflicting feelings of confidence as an artist and the frightening unknowing of what the future holds. I am forever reminded that this song's meaning and perception varies from listener to listener, as I have been fortunate enough to hear from so many around the world. To say I'm grateful isn't enough. I still can't grasp how my music has resonated so far beyond my own headphones. As a thank you to those who have supported me since the beginning, I wanted to create something special. I worked with close friends to breathe new life into Everyday. My friend Todd Schied recorded my performance on his beautiful Yamaha grand piano. Ben Hallman, a local videographer who year after year creates stunning videos for our hometown of Bethlehem's main event Musikfest, directed and shot the video. Combining Todd's thoughtfulness and care with Ben's creative energy, we were able to produce everything I wanted for the first-ever captured performance of "Everyday." This is a thank you to my friends, my family and my fans. Your words of support mean more than you know and you've enabled me to dream bigger than I thought possible. We all may associate different emotions to this song, but it's magical how it brings us all together. I will never take that for granted," says Carly.

“Everyday” is the score to dozens of viral videos including "Noah Takes a Photo of Himself Every Day For 6 Years" (27 Million views), "One Photo A Day in the Worst Year of My Life" (60 Million views) and was further popularized as the theme song for the NBA's “Where Amazing Happens” campaign. Carly's music has been used in ad campaigns and television commercials for America's Got Talent, NBC's Rio Olympics, DirecTV's Peyton Manning SuperBowl Hero tribute, Bombas Socks, Specialized Bikes, The Simpsons, AOL webseries "Beyond The Horizon", Ubisoft, United Way, Amnesty International, The Pasteur Institute, Petcurean, Vodafone, Canon, Channel 4 UK, Philips, Cosmos and many others.

Carly was recently selected to be the main composer for the upcoming film "WALK: 8000 Miles in New York" from award-winning filmmaker Jeremy Workman and Executive Producer, actor and Academy Award nominee Jesse Eisenberg (The Social Network, Batman vs. Superman, Now You See Me, The Squid and the Whale). For over six years, and for reasons he can't explain, 37 year old Matt Green has been walking every block of every street in New York City – a journey of more than 8,000 miles. WALK tells the story of one man’s unusual personal quest and the unexpected journey of discovery, humanity and wonder that ensues. WALK will premier on the film festival circuit.

Carly Comando's discography includes her latest full-length Dreamlife (2015), debut full-length "One Take" including "Everyday" (2010), Cordelia (2010), Everyday 2.0 (2012) and Every Moment (2013) all of which have been proudly released on Deep Elm Records. Carly resides in Bethlehem, Pennsylvania. And yes, that is her real name.