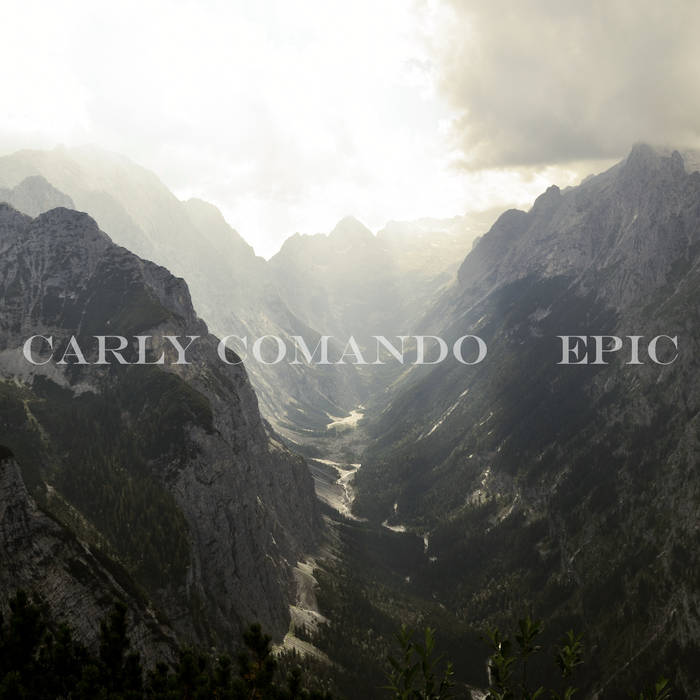 On her impressive new full-length Epic, Carly Comando presents the realization of a fresh new direction and reaffirms her extraordinary skill for writing instrumentals that are as perfect for those unforgettable big screen moments as they are for personal enjoyment. Without sacrificing her signature songwriting style, Carly explored a wealth of new instrumentation to create powerful, emotive pieces that could soundtrack pivotal life events for the listener. Compelling tracks like the flowing “Airborne”, pensive “Clarity” and moody "Breathless" illustrate Carly's evolved artistic style. It's no wonder that her music resonates on a global basis when inspiring, stirring and memorable are the words most frequently used to describe her achingly beautiful work. A cathartic release of emotion for this Primetime Emmy Award-winning composer, Epic runs the gamut from powerful to gentle and sweeping to sparse and was well worth the nearly four year wait. You just can't rush cinematic excellence.

"Celebrating a refreshing new musical direction while maintaining authenticity has been an epic journey. There was no better word to describe this album than that. In my studio, I completed an album of piano tracks and when I listened back to them, I didn’t feel overwhelmingly excited or moved by them. I heard really brilliant ideas and motifs in the tracks I had written, but I felt somewhat uninspired. My solution to creative blockage has always been to switch gears and to challenge myself musically...and that's what I did. My photographer friend DeAnn Desilets and I started a project where every week we’d create a piece in response to each other’s art. One week she’d send me a photo and I’d create a song in response. The next week, I’d create a song for her to capture photographically. It opened up my brain in a new way and I stopped worrying, blanking out and grasping for ideas. It all just started flowing in such a beautiful way. I knew I was onto something when all I wanted to do was listen to my own songs and they’d keep popping into my head during the day. This approach gave me the inspiration I needed and I kept going with it. I was still inspired to write solo piano pieces, but I also had fun exploring new instrumentation with strings, horns, drums and bass. I’ve developed as an artist while staying the same. It’s been a long, epic, fulfilling journey," says Carly.

She continues, "I embraced this new direction and method of songwriting, while inserting my own personal touch and stories in them. These songs document my own journey of falling down and getting back up again. In the time this album was written, I suffered depression and started therapy. My own emotional spectrum is present on this record. As is always my goal with music, I hope to bond with other people dealing with the ups and downs of life in a shared experience. Sometimes we feel so alone and hopeless, but feeling your live events and identity in another’s art shows us that we’re not alone. The community aspect of music is the reason I do this: meeting people and sharing stories of how we get through the best and worst of life empowers us to keep going. Music allows us to feel connected no matter who we are, where we are or what we’ve experienced."

"Epic" was produced, performed, engineered and mixed by Carly Comando in her private studio. Mastered by Todd Schied. Album artwork by Jo Jo. Photo by Laura Murray. Carly's discography includes "Everyday" (single), "Dreamlife" (full-length), "Clarity" (triple single), "One Take" (debut full-length), "Everyday 2.0" (single) and "Every Moment" (single). All recordings have been proudly released on Deep Elm Records. Carly also plays keyboards and sings in Slingshot Dakota. Carly recently composed portions of the score for the documentary film "The World Before Your Feet" (Executive Produced by Jesse Eisenberg, Produced by Jeremy Workman), which has won accolades worldwide on it's 70+ city theatrical run (4 Stars from Roger Ebert / 100% rating on Rotten Tomatoes). She resides in Allentown, Pennsylvania. And yes, that is her real name.

Carly's well-recognized piano ballad "Everyday" is the score to nearly 200,000 videos on Youtube alone including numerous of viral videos such as "One Photo A Day in the Worst Year of My Life" (60+ Million views), "Noah Takes a Photo of Himself Every Day For 6 Years" (26+ Million views) and the NBA's classic “Where Amazing Happens” campaign. Carly's music has been used in ad campaigns and television commercials for Bombas Socks, America's Got Talent, Amnesty International, Pasteur Institute, The Simpsons, Petcurean, Vodafone, Canon, Channel 4 UK, Philips and many more.

"This is music that changes lives, opens minds, broadens horizons. An amazing pianist." - ANA
"Beautiful and soothing, evoking emotions to ease scattered minds. A talented composer." - SweetieJo
"Emotional and inspiring, she grabs your soul and moves you. Highly recommended." - The Rez