Deep Elm: Too Young To Die 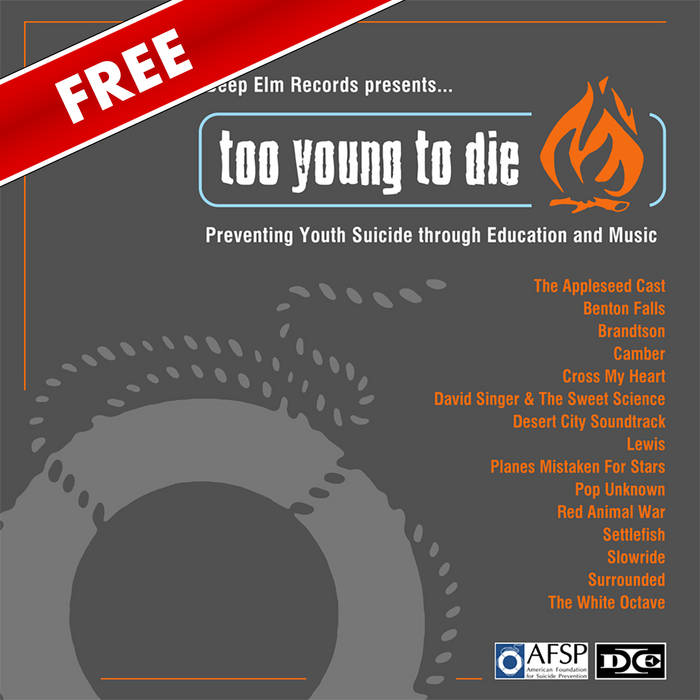 Too Young To Die was created by Deep Elm Records and its Artists to provide education, increase recognition and prevent youth suicide. In America, a life is lost to suicide every 18 minutes and another attempt is made every minute. The 19 song Too Young To Die sampler includes a Suicide Prevention Guide (pdf) that could help you save a friend, plus other facts and information about suicide and depression. Each song was hand-picked for lyrics that promote hope, faith, perseverance and survival as well as the understanding that you're not alone in feelings of depression, loneliness and doubt. You get 72 minutes of music that you won't find on any other sampler! Bands include those on the Too Young To Die Tour (Brandtson, Red Animal War, Desert City Soundtrack, Settlefish, David Singer) plus Appleseed Cast, Planes Mistaken For Stars, Benton Falls, Surrounded and many more. (DER-427)

"I'm still waiting for the day when Deep Elm sends me a bad album to review, and after getting the Too Young To Die compilation, I'll continue to wait. Featuring the latest from the likes of Benton Falls, Red Animal War, Brandtson, Settlefish, Desert City Soundtrack and The Appleseed Cast, you get a lot of great music. It's also important to note that a portion of the profits from this album, the attached tour and merchandise go toward youth suicide prevention. The songs are all handpicked from the Deep Elm catalog for the most inspirational lyrics, and the liner notes include information on suicide warning signs, facts, phone numbers for help and a surplus of other useful information and statistics. It is great to see a label actually do something constructive with music instead of merely packaging it for profit." - Last Life Media