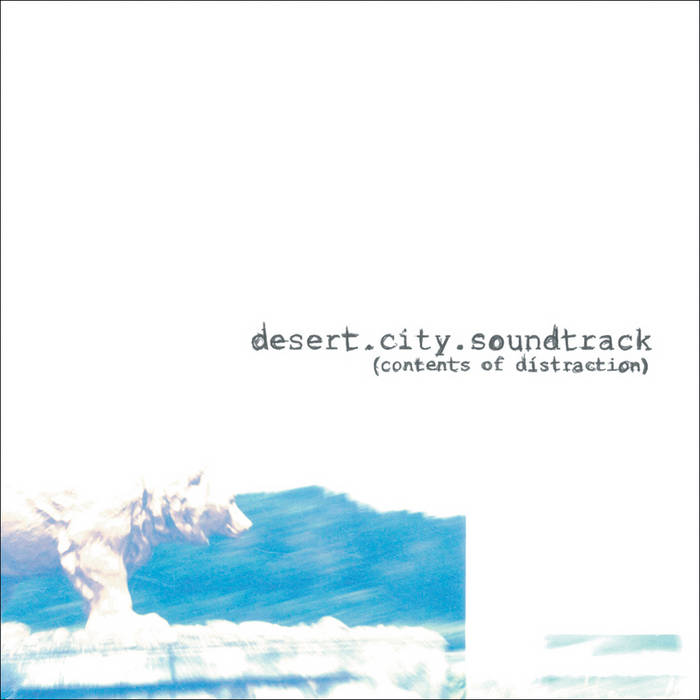 Contents Of Distraction works sound and structure into an awe-inspiring, dark collection of post-hardcore brilliance that crashes head-on, explodes upwards and just keeps going and going, twisting and turning, morphing and melting. Half the time blistering and fierce with urgent intensity, the other half restrained and unearthly much like the calm before the storm. Gasping instrumentation including exquisite piano, intricate guitar work and unrelentless rhythm provides a fitting tone on themes of sadness, depression, isolation and heartache. A pandora's box of content, consequence and unprecedented musical theater. The exceptional lyrics hit hard with a yearning voice that gives a stunning side to melancholia and pain. It's all here. From sheer silence to sheer violence...this is Desert City Soundtrack. (DER-425)

"Desert City Soundtrack produces immaculately detailed and exceptionally dark music. Contents Of Distraction both caresses and pummels the listener, hammering you with sheer guitar violence and strained vocals before evaporating gracefully into moments of unsettled tranquility, accented by the moody beauty of Cory Gray's piano. This is a band which has control over a wide range of emotions, rising and falling as desperate lyrics paint uneasy pictures of life's insecurities. Matt Carillo is a vocalist to admire, for he strains his vocals to their breaking point before collecting himself, all the while remaining in command of his words. The most impressive aspect of the band is the sheer girth of their sound, as the members incorporate hardcore with more ethereal components, yet still have the passion to generate the six minute plus songs like Murderhearts, a pristine piano-laced effort that appears harmless until its volcanic climax. Unequivocally, Contents Of Distraction is worth finding." - Jersey Beat

"Imagine if Faith No More or the Afghan Whigs had taken the emo path, and you'll be close to the sonic heart of Desert City Soundtrack. The Portland, OR quartet offers a broad range of musical delights on its seven-track, fleshed out EP, Contents Of Distraction. The most striking element of the DCS sound is the tension built up between the cascading sheets of Matt Carillo's guitars and the emotionally intense counterpoint of Cory Gray's magnificent piano constructions. Gray's multi-instrumental capabilities (all keyboards, vocals and trumpet) and Carillo's careening vocal and guitar gyrations, along with the intuitively gifted rhythm section of bassist Make Casanova and drummer Caitlin Love, gives Desert City Soundtrack a balance and maturity rare in the punk / emo genre, and hints at the potential of a full album's worth of similar material." - Rockpile

"If Coldplay and Sonic Youth produced a love child, Desert City Soundtrack would be it. The Portland-based quartet, which features former members of Edaline, fuses elements of piano-soaked Brit-pop and discordant, angular post-punk with trumpet swells and strained vocals to create songs that teeter precariously between gorgeously melodic and seething explosiveness. It's a dynamic and expressive seven-song disc that captures the attention early on and refuses to let go until it has succeeded in making its point." - Exclaim