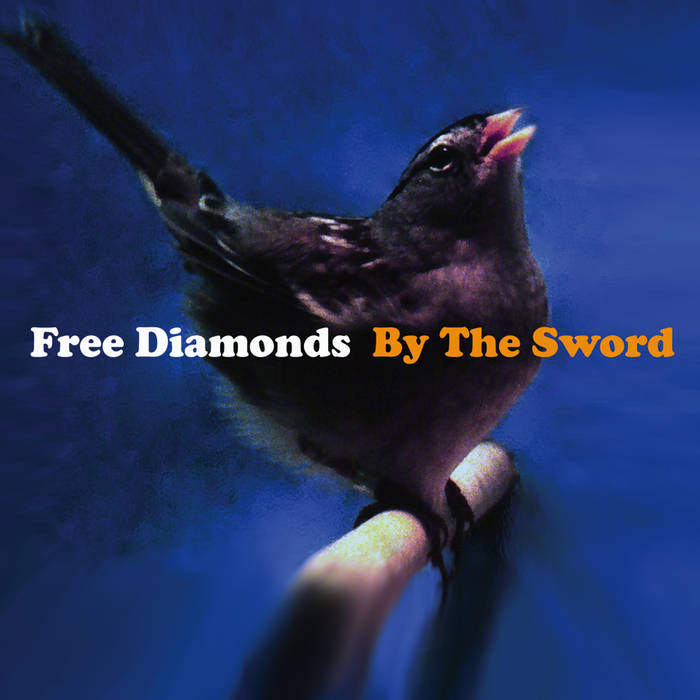 Free Diamonds has always been a band that toes a precariously seductive line; you're either already infatuated with this three piece's off-kilter, quirky post-punk, adrenaline-fueled freak-outs, or you soon will be! Anything less than total dedication to herky-jerky pop abandon from the Starship FD and their songs wouldn't have nearly the charismatic, careening-around-the-dance-floor punch we've come to know and love. Their sophomore full-length, By The Sword, is no different. Free Diamonds are who they are - unhinged, sassy and boisterous ­ and don't think for a second that they're going to apologize for it. Of course, that doesn't mean the over-caffeinated, fun-filled formula hasn't been tweaked on By The Sword. After all, no matter how unpredictable, acrobatic and dizzying the song structures, Free Diamonds has always shown a strong affinity for an undeniably catchy melody. It's the reason why their music brings a mischievous smile to our faces as we allow the palatable sass to somersault around our brains before it sweetly stings our ears. If their 2005 debut There Should Be More Dancing was Free Diamonds' frenzied, pogo-punk spazz-out, then By The Sword is a weird calypso two-step smashing into a sexy rumba, played double-time at a Degrassi Junior High sock hop. It's a shake-and-shimmy for the cool, nerdy kids while the jocks stand around, totally confused. Or maybe vocalist / guitarist Scott Anderson nails it when he says "Free Diamonds is the sound of two cousins kissing; they know its wrong, but it feels dangerous and sexy." Maybe we should all live by the sword. (DER-463)

"By The Sword is a logical, if unexpected, follow-up to Free Diamonds' debut There Should Be More Dancing. Where Dancing was the sound of a hyperactive party, this is the sound of the party mellowing out as the night goes on. While Free Diamonds haven't abandoned the complicated rhythms, incredible bass riffing and hyperactive vocals that are their trademark, songs like Hugs and Kisses more properly establish the tone of the album. It may be the most infectious song that Free Diamonds have ever written. Every song reveals something new about the band's sound. With By The Sword, Free Diamonds prove that they do not comprise a one-trick pony, and even though this album is definitely calmer than its predecessor, its difference is what makes it succeed. By The Sword doesn't try to repeat the sugar rush; it gathers the best parts of that sound and adds in new elements. It will make you dance because of the grooves, and that's totally awesome...just as awesome as There Should Be More Dancing. And that makes Free Diamonds really fantastic." - Independent Clauses

"Free Diamonds has more in common with the insanity of Blood Brothers and Q and Not U. With Scott Anderson's crazed delivery, Gemma Andrews' laconic drawl makes a big difference. There's some creativity being welded together on By The Sword in increasingly angular and confusing shapes. It absorbs punk energy in the scattergun vocals, drags folk guitars in to anchor it to Planet Earth and provides quirky indie-pop synths and metronomic drumming to drive everything on all four wheels. The oddness on these sixteen tracks is endearing and enjoyable. With flourishes of fast flurrying bass and guitar plus some clever twists and turns, Free Diamonds becomes more worth shouting about." - Subba-Cultcha

"Free Diamonds have been deemed 'pogo-punk' because they've got enough bounce in them to get any would-be head-banger interested. Therefore, By the Sword should tickle my fancy enough to recommend it above everything else this month, right? Absolutely. I would totally have dirty, dirty sex with tracks like Hugs and Kisses if it was possible. This band's charm is just so contagious. Paul Cosgrove's bass bubbles over every song's surface like the froth of a milkshake you can't help but take a sip of. Scott Anderson's vocal work gives the album that strangely unique kick to set Free Diamonds apart. The energetic vibe he radiates is just so undeniably fetching. Whether I was destined to come across Free Diamonds' By the Sword to quell my fear of dancing or to lighten up my summer, it has successfully managed to accomplish the latter. As for dancing, it may take a little bit longer to throw my self-conscious shit out the window, but Free Diamonds have certainly helped me reconsider such. Figures it'd be an English band to do so, because God knows I haven't heard such a wonderful dance-infused album come out of this stiff scene." - Absolutepunk