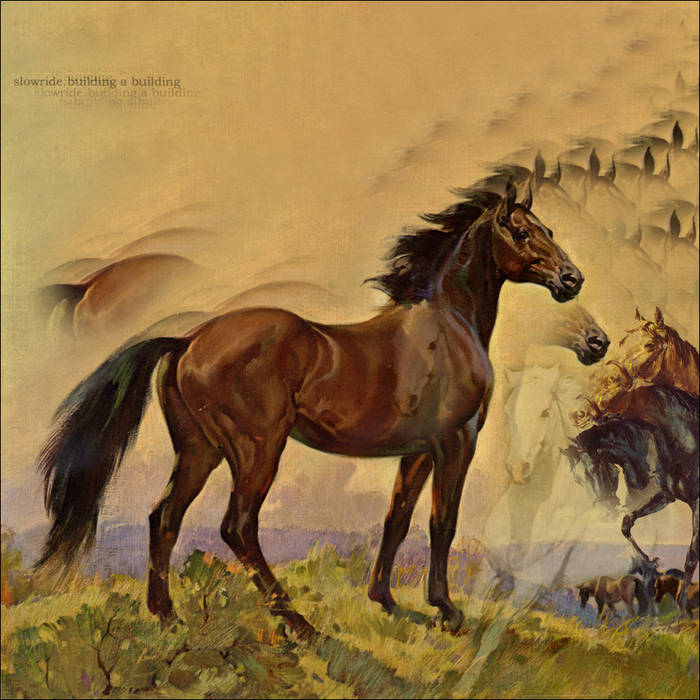 On Building A Building, Dallas-based trio Slowride offers catchy, emotionally complex songs without recycling anything from previous efforts. Though unrelenting with tight bass, drums and forceful guitar parts, they incorporate close harmonies and melodies with garage-ish influences...gritty, cutting and honest. It adds up to a record you won't feel guilty singing along with. Slowride begins the attack with the one-two punch of Smoke Cigarettes and the head-bobbing, hand-clapping single Panther 1. But these tenacious riffs and aggressive hooks are tempered with something that fans of their debut wouldn't expect. Last album they may have sang On Our Own, but on this record they have come "into their own." Slowride has entered a new phase...it's raw and sincere and, for the band, more natural. In writing, lyrics and production, Building A Building is the portrait of a mature band, not only maturity through time and age, but also through following their hearts. (DER-414)

"Building A Building is my favorite Deep Elm release since the Low Level Owl albums. Slowride rock out, never copying anyone or borrowing any particular sound, but I do hear flashes of Husker Du, And You Will Know Us By The Trail Of Dead, Samiam and The Pixies. There are a few acoustic tracks that have an alt-country sound that actually adds to the garage rock on the rest of the record. It's almost as if Slowride toss it back and forth. Building A Building closes with nothing short of a Beatles meets Sonic Youth swirling frenzy, which seems appropriate. A definite for old fans, and one that should make a slew of new ones." - Feast Of Hate And Fear

"Slowride has released their sophomore record, Building a Building, and the band has transitioned into a powerful, grinding punk rock outfit, convincingly reestablishing and reinventing their personal sound. The outcome is stunningly successful. Building A Building is full of powerful rock songs that convey a sense of passion and pleasure through a very dirty and gritty sound. Many may compare this to early Foo Fighters, but even Dave Grohl couldn't portray the same affection and conviction that Slowride have on this album. Building A Building stands alone, without any song overpowering another, exemplifying unification and harmony. For Slowride, the sophomore slump was merely a time of fine-tuning. With their polished and extremely powerful approach, Slowride has made a wonderfully enjoyable record." - Tiny Mix Tapes

"I can't get over what a gem Building A Building is. Slowride is rockin' one minute, introspective and sincere the next, honest and true throughout. This is heavy without being heavy handed, with lyrics and melodies from the heart, inventive hooks and tons of killer riffs. The tone of the songs mesh with the lyrical message perfectly, featuring a raw edge that fits the realness of the intensity in the words and the waves of carefully crushed notes. Every track is a treasure. Building A Building is one of my favorite discoveries of the year." - Tangerine