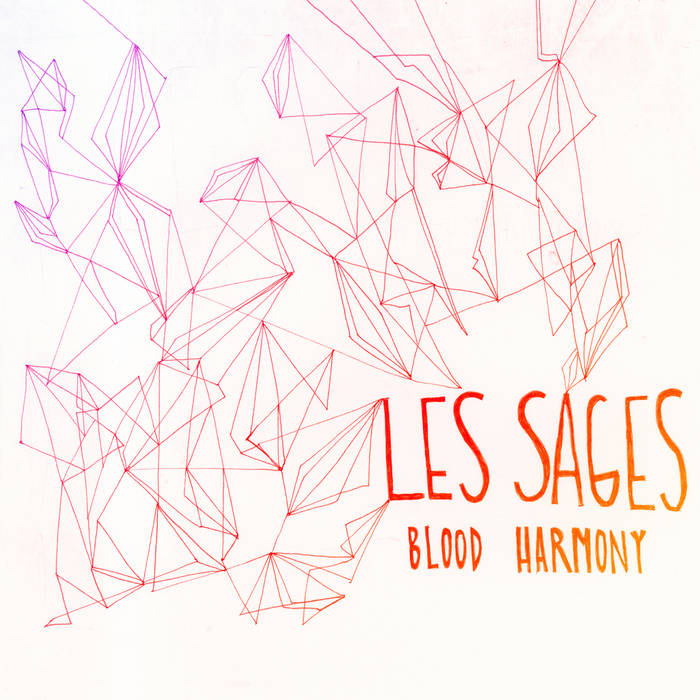 Seven siblings, seven voices, seven songs...sans électricité. That's "Blood Harmony" in a nutshell. Ah, if life was only that simple for all of us. Fortunately, it is for this indie-folk-rock family outfit known as LES SAGES (pronounced Lay-Sahj), which has upped the stakes with the addition of three more members to seven total. In reality, however, there is nothing quite that simple about Les Sages. Shrouded in the exquisitely complex harmonies, poetic lyrics, hard-to-forget melodies and stunning acoustic performances are deep socio-moral messages. Whether their message is about the allure and fallacy of rejecting society for its faults (Mexique), staying true to your dreams amid naysayers (La Lutte Des Classes), the affirmation of the possibility of lasting love (Nomades) or a call to each of us to be a person that interacts with others only for good (Amis), Les Sages' theme of positivity and self-exploration rings clear. And the best part: while other bands use studio tricks to produce harmonies and counterpoints like those you'll hear on Blood Harmony, Les Sages does it for real, live, in the flesh. Blood Harmony includes new track Mexique plus acoustic-harmony versions of six songs (retitled in French) that originally appeared on the band's critically-acclaimed Deep Elm debut "Share This."

"Blood Harmony is an effort to draw out the soul of the band" says Kris Larson. He continues, "We tried to limit instrumentation to accents and percussion and to force more weight on the vocals to carry the sonic roundness, emotion and essence of the songs. Blood Harmony is the flavor of our childhood music-making, a giant family sitting around one guitar or one piano, each person improvising their own harmony. The decision to create this album came when we were asked to join our friends from Rock for Justice on tour raising relief funds for flood victims in Pakistan. We wanted to create a set that would be totally fun to play and easy to take on the road. This was the seed for Blood Harmony. The artwork, by our good friend and fan Bayley Brook Christensen, is an abstract visual meant to depict the the idea of blood-related siblings singing in harmony. We hope the message listeners take away from the album is that everyone is okay. Even though there are terrible things in the world, humans are resilient. We survive and have the capacity to experience joy through it all. We shouldn’t allow ourselves to become frozen by fear or anxiety. We shouldn’t hate the world because it is imperfect. Let's stay positive and make it a little better."

Les Sages consists of seven (of nine) immediate siblings including original members Kris Larson, Peter Larson, Andrew Larson and Joe Larson plus Clara Larson, Annie Larson Adolphson and John Larson. On this release, all members switched off between vocals and playing celesta, piano, guitar, djembe, tambourine and various other percussion instruments. Blood Harmony was recorded and produced by Les Sages at their home studios in Salt Lake City and Provo, Utah. Deep Elm also released the band's full-length "Share This" (2010) as well as the innovative theatrical album "Animals" (2008). The Larson clan was born in Alberta, Canada and at a very young age entered into their existence as nomads (see lyrics for Nomades) residing in over a dozen cities both domestically and overseas before settling in Utah.

“Filled with a rare sophistication that transcends momentary fixations with moral awareness.” - The Punk Site

“Intimate and hits close to home. Capable of changing the world, one repeat button at a time. ” - Bloginity