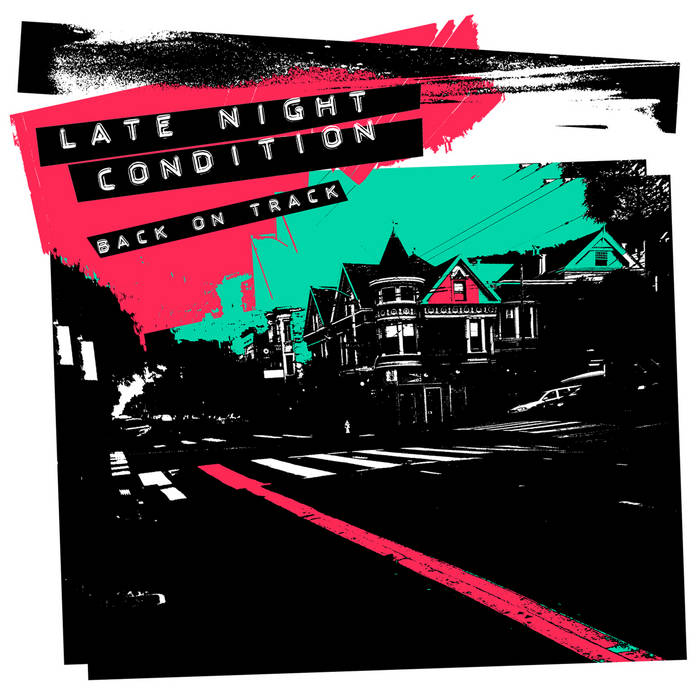 ihearttokissthecooter0
An infectious album that you can easily sing along to .....

After a multi-year hiatus, Buenos Aires' rock-fueled brigade LATE NIGHT CONDITION is Back On Track indeed with ten new, yet comfortingly familiar, songs that unquestionably lean punk. The band's smart, punk-inspired pop is potent in its simplicity, glimmering steadily throughout Back On Track's theme of rising above adversity and emotional hardship. With powerful guitar riffs, driving bass, meticulous drums and soothing vocals on standout tracks including "200", "Countdown" and "One Good Feeling", it's as if Late Night Condition has set out to help their listeners find light in the darkness. Alejandro De Gennaro's nasal croon is just one of the many stars of the show. His vocal delivery has been compared to that of Chris Cornell (Audioslave), Matt Skiba (Blink 182) and Colin Hay (Men At Work). It's the raw honesty in his vocals and the hard-fought determination to transcend and overcome life's woes expressed in the lyrics that you can't help but get caught up in...even when delivered all the way from Buenos Aires. Polished smooth with impressive craftsmanship, this is the kind of follow up to a well-received debut that every band tries for, but few actually deliver. Back On Track will undoubtedly placate anyone who dares think Deep Elm Record's has abandoned it's early rock and punk roots.

"Back On Track is an album that took a lot of hard work. We had personal problems that delayed the recording and the entire process and it took so long that we felt the title was the exact definition of what we were going through. And it sums up were we are right now: back on track. When things you love and care about and want so much don't come soon or easy, it gives you a feeling of emptiness and it makes you rethink your entire existence. But there is no escape from it. We are musicians and we need music to live and breathe. No matter how slow the process is or whatever problems we might have we always stick together and work it out. That's what it's all about. That's what inspired us mainly. No matter where you go or what you do music will always follow. And we want the listeners to relate to our music and lyrics because they are all based on personal experiences which one way or another are common to all of us. We don’t make up stories, we don't invent…everything you listen to is completely authentic. And that's the message we want to send. We want our listeners to be able to relate to our emotions, so they can feel what we feel," says lead vocalist De Gennaro.

Drummer Fernando Perewozki adds, "We are night people. Most of our activities are done at night, most of our songwriting, practicing, live shows, recording and pretty much anything else related to our music. Late Night Condition is also, as the word so clearly states, a condition. Not an illness nor a disease. Just a thing that we all live with. We feel that at night we usually get more in touch with our feelings and there is also that sense of loneliness that drives us into nostalgia, melancholy, anger, pain, even happiness and joy. It also relates to the world being quieter at night. As did our debut, Back On Track again chronicles many of the 'late night conditions' shared by us all.”

"Punk power chords and consistently interesting lyrics make LNC stand out from other artists in the genre." - Snooze Control

"A blustery mix of rock attitude and punk melody, turn it up to eleven and let your ears bleed." - Aiding & Abetting

"Although it is wracked with heartbreak, this is an incredibly uplifting album. Quite exceptional and unique." - Alt Sounds

Late Night Condition is Alejandro De Gennaro (lead vocals / guitar), Nicolas De Gennaro (lead guitar / vocals), Pablo Rodriguez (bass) and Fernando Perewozki (drums). Back On Track was produced and recorded at Monasterio Studios in Buenos Aires, Argentina by the Cariola Bros. and mixed at El Pie Studio (Sumo, Soda Stereo, Animal) by Osko Cariola. The album was mastered at Puro Mastering Studios by Eduardo Bergallo, a well known engineer and producer, who has worked with Shakira, Soda Stereo, Los Pericos and more. The Cariolas also produced, recorded and mixed the band's debut Give & Take as well as their Midnight Confessions EP also released on Deep Elm Records. Cover art by Fede Minuchin. The band resides in Buenos Aires, Argentina and is the first artist from South America to join the Deep Elm family of fine artists.