As Your Shoulders Turn On You

by The Cast Before The Break 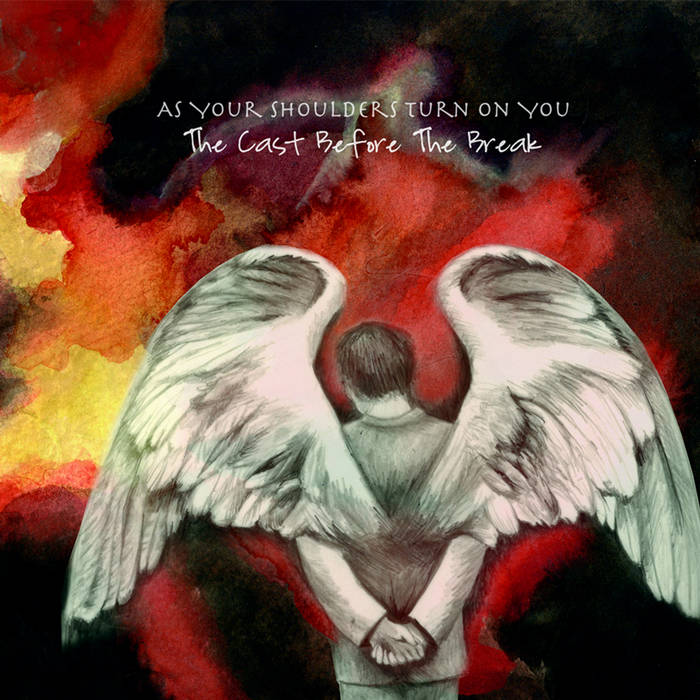 "The idea behind the title is that there is no angel or devil on your shoulder telling you what to do. Turning and finding nothing forces you to guide your own way, make your own decisions and consequently grow more as an individual. Sometimes finding nothing at all is the most imprtant thing you can find" says vocalist TJ Foster. Lyrically, the album chronicles a man who has been hit by a drunk driver and left in a coma. He is floating between life and death, not only questioning his life, his faith and his experiences, but remembering what they felt like. Near the end of the album, the victim wakes up to find the drunk driver in the hospital bed next to him. (DER-526)

"In just six tracks I felt a part of something bigger than me..." - Music Under Fire

"While The Cast Before The Break touch several similar bases to the New Jersey post-hardcore act Thursday, TCBTB have more in common with the post-rock genre. Every track on 'As Your Shoulders Turn On You' seems designed to work just as easily in instrumental form, and yet the lyrics are no afterthought. Their Palahniuk-esque ambivalence of hope and despair flow throughout every single syllable uttered. If vocals are not necessary or integral to the concept of the album, they are simply not used. Even if it results in asymmetrical song structures (such as on opening track 'Onward Love') Indeed, a lot of the album appears oddly structured upon first glance. With the one-two punch of the previously mentioned 'Onward Love' and follow-up 'From the Earth, At a Crossroad' it seems as though the album has peaked too early. But as is the sign with all great albums, as further listens are afforded, moments and songs that priorly passed by unnoticed become the ones you await eagerly, clearly shifting the highlights to the final act. 'From the Earth, At a Crossroad' is perhaps the most immediate. Commencing with a horseback ride to the scene of a 'pistols at dawn' old west duel, things are quickly launched to the present with unlikely yet permanently infectious groove-laden guitar riff which introduces a vocal call-to-feet of 'How we dance! How we sing!'. Not content with this change of pace, the boys give us one of the most breathtaking bridge sections known to mankind which sees the lone flouting of their screaming amnesty. Their restraint throughout the rest of the album makes this moment infinitely more special and capable of penetrating through to even the emotional core of a stone. No stop is left unpulled on this album. Pianos, violins and experimental electronica are inextricably fused to it's spine. Drums, scattered across the horizontal axis of sound, add immensely to the sense of paranoia and claustrophobia which permeates their sound. The central concept of the comatose man haunted by the opposing pull of revenge and love is made all the more resonant and impactive by these flourishes. By the time the spine-tingling instrumental barrage of 'Cerca Trova' (He who seeks, finds) gives way to the lamenting epilogue, it'll be difficult to pick one highlight from the crowd. We were well aware though, that we had just witnessed one of the most impressive and refreshing alternative rock albums since Thursday's 'Full Collapse' and At The Drive-In's 'Relationship of Command'." - Strange Glue

"Outstanding. Beautiful instrumentation in the vein of Explosions in the Sky...truly something special." - Heist Party

"What if Thursday and Moving Mountains had a baby? The Cast Before The Break is the exact and only answer to that question. This album is special. This is that rare album that comes out once a year ­ maybe. As Your Shoulders Turn On You is this year's Pneuma (ref. Moving Mountains). The album starts with 'Onward, Love, ' a six minute mostly instrumental track that sets the tone for the rest of the album ­ moody, atmospheric, but yet carrying an overarching epic feel to each movement in the song. Lyrically explaining that we are our own instruments to destruction, the song leads into 'From The Earth, At A Crossroad, ' arguably the most accessible song on the album. A pacing beat around a floor-tom and snare behind a simple bass line carries a ridiculous amount of intensity up to each chorus. The song is actually about a car accident and everything that surrounds it. I know, tons of songs about accidents, right? Here's what I kept from you: this album is about the narrators last half hour of life as it is played out through the album. Self discovery, loneliness, and revenge are all explored in many different ways, from the mostly acoustic 'Relying On A Respirator ' to the beautiful 'Understanding The Universe. ' So what makes this album so special besides that it is a genius idea for a concept album? From the strained vocals to the unmeasurable passion, the vocals really shine throughout the album. However, there is no better way to say it: this album is strong because the songs are just really well written. Every song is epic. Every song goes from tons of instruments to just a basic piano and percussion arrangement, and yet, nothing feels left behind. The energy is retained. The album carries absolutely no filler within itself, and everything that happens in each song is there for a reason. Nothing feels forced. Nothing feels misplaced. The flow of the sounds is quite simply breathtaking. This is an album that needs to be listened from the beginning to the end, not from the middle. 'As Your Shoulders Turn On You ' will be a contender for one of the top albums of 2008 and may possibly take the crown. There simply is no better way to say it. Whether its the hard hitting ending of 'Cerca Trova ' or the trick ending to 'Understanding The Universe, ' The Cast Before The Break keeps raising the bar song after song during your first listen. Very few albums have left me so impressed on the first listen ­ to name a few, Vheissu, Pneuma, and Transatlanticism were albums that left me with similar impressions. Big things are going to happen to this band. Just wait and watch. [9.4 / 10]" - Music Scene Today