As I Survive The Suicide Bomber 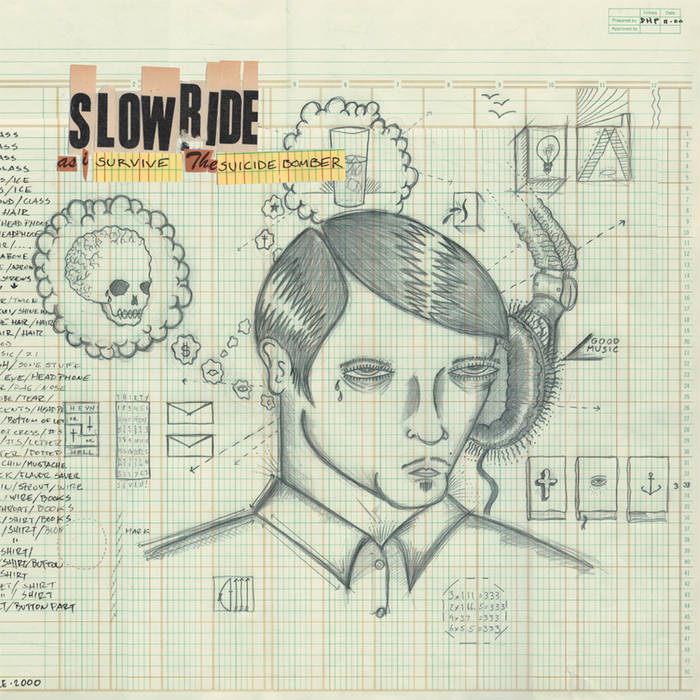 Tim Allen One of the few albums I loved in high school I'm not ashamed of now. Awesome vocals, evocative lyrics, and musically inspired without being derivative. So happy to have it back in my life. Favorite track: Computer.

Firing on all cylinders with their hearts on their sleeves, Slowride's brand of hook-laden, melodic rock is head-bobbing, energetic, aggressive and in-your-face. A layering of punk guitars behind catchy melodies and smooth vocals, As I Survive The Suicide Bomber is a smartly served dose of perfectly executed, pop-fueled punk...a truly inspirational, punk masterpiece. True to Slowride's brand of emotional punk, Dan Phillips belts out lyrics for the bruised and battered at heart, and you can't help but sing along. Not since Jawbreaker has any band so successfully combined heartbreaking melody and white noise. Slowride breathes new life into punk rock with an impeccable band member chemistry rarely displayed. Hear it, see it, believe it. Unreleased "Daydreams Of A Future" on Emo Diaries 5. (DER-406)

"Rarely has emotive punk ever sounded so mature and serious without slipping into redundant cliches. Slowride's melodies are the musical equivalent of moonlight shining down on calm waters: beautiful, serene and a vision from which you cannot pull away. As I Survive The Suicide Bomber takes you though the ups and downs of relationships, the frailty of the heart and the pain of failure, yet there is no whining. Rather, the boys opt for a more sardonic approach lyrically, while the music is voluminous and guitar intensive, such as the brilliantly titled I'm Everything Without You. Slowride has energized a genre by doing what all great bands do; generating a high energy level and delivering anthems with passion. A tremendous rock album with emotional lyrics that only enhance the playing. A real find." - Jersey Beat

"Occasionally, my friend is able to convince me that rock music is fading fast. Slowride's debut, As I Survive The Suicide Bomber, is some strong evidence to the contrary. The sound: loud guitars, thumping bass and hyper-spastic drumming. Dan Phillips sings on key but with a simultaneous harshness. His voice harks back to the punk rock of a decade ago, reminiscent of Mike Ness of Social Distortion. The songs are catchy, exploding right from the start with I'm Everything Without You followed by the equally catchy Rockets And Jets. As I Survive The Suicide Bomber is charged with energy and sincerity, and as long as there are bands like Slowride, I'm not giving up on rock." - Mere Exposure

"As I Survive The Suicide Bomber from Slowride is exactly the kind of volume-up, windows-down record you need when school just lets out and the interstate is calling you. I'm Everything Without You rips this tour-de-force open, and within the first fifteen seconds you know exactly what type of music this is. The guitars are so thick and punchy and the tunes are immediately hum-able. This is a record that you put on when you want to sing along at the top of your lungs, and you'll probably know every word after only a few listens. Like a good record should, though, As I Survive the Suicide Bomber mixes things up quite a bit as well. Though everything here is almost immediately catchy, like Jawbreaker the band can make you cry just as well as they can make you sing. Still, dark and crunchy isn't the only trick up the band's sleeve - On Self Improvement: Lesson One they turn up the acoustic guitars, without completely abandoning the electric. No matter what Slowride do they do it well. If your road trip music of choice leans toward Jawbreaker, Face to Face or Dillinger Four, you just found the next record you should be buying. Get this now." - Deep Fry Bonanza