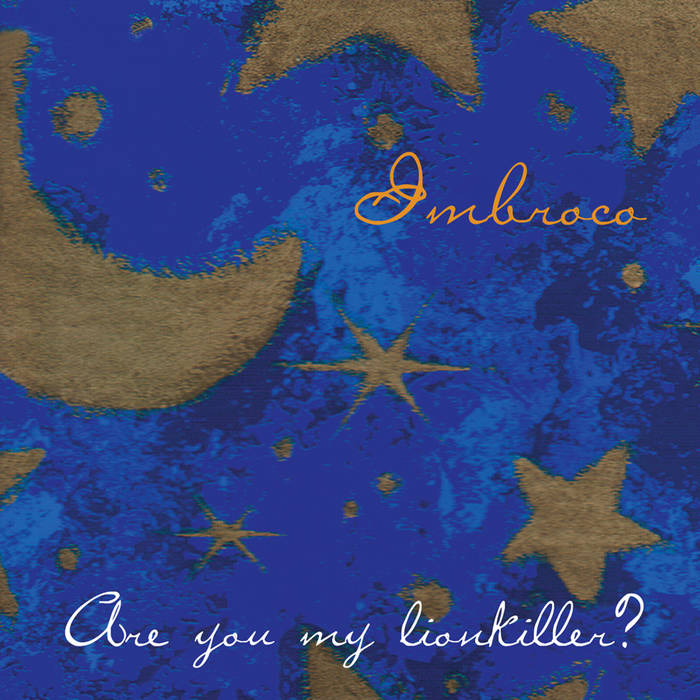 George Hickman I was lucky enough to see this band during their very brief existence and its wall of sound with Elliott Smith style vocals translated very well to the stage. Every song feels dynamic and unique as it carves what is still their own corner of emo. Rory Phillips, best known for the Impossibles and the Stereo, is at his most vulnerable as a vocalist and most powerful as a songwriter and he’s only made better flanked by what is for my money the best half of Mineral. I love this EP. Favorite track: Northstar Is An Airplane.

With an impressive line-up that includes Scott McCarver (ex-Mineral), Gabe Wiley (Pop Unknown, ex-Mineral), Matt Breedlove (Pop Unknown) and Rory Phillips (The Impossibles, ex-The Stereo), an element of pure, experience-bred songwriting can be expected from Imbroco. Are You My Lionkiller?'s beautiful instrumentation, immaculate guitar work, meticulous percussion and tender vocals deliver an onslaught of what is truly respectable in the underground. One of three bands to rise from the ashes of Mineral (others include Pop Unknown and The Gloria Record). A must have. (DER-387)

"In that period between the breakup of Mineral and during the early days of Pop Unknown came Imbroco, and Deep Elm has finally pulled their songs together for release. With Scott McCarver and Gabe Wiley from Mineral, it's easy to hear the edgy power of that band on Are You My Lionkiller? But with Wiley and Matt Breedlove also in Pop Unknown, it's also easy to hear the development of that band. Rory Phillips, formerly of The Stereo and currently The Impossibles, has a voice that can go from soft and pretty to emotionally on the verge of screaming in an instant, and although he sounds a bit cleaner and lighter than some emo bands' vocalists, he works perfectly here. So, you probably guessed what Imbroco sounds like: powerful, emotional, guitar-driven post-hardcore rock with beautiful melodic moments and moments of sheer, almost screaming intensity. Imbroco haven't been around for a while, and you're just hearing about it now, but thank Deep Elm for bringing these songs back. Because, if you're like me and you can't ever get enough of Mineral and post-Mineral style emotional rock, you're going to be longing desperately for these songs. Powerful, emotional, and held barely held in check from breaking into chaotic intensity, these songs deserve to be heard. And with beautiful packaging, this disc deserves to be had." - Delusions of Adequacy

"Are You My Lionkiller is a dream almost tailor-made for fans of melodic, dynamic, lush, and rolling pop, with edges crashing on rock and sonic outburst like hysterics filling the spaces between the waves. I think these guys fall a bit closer to the pop-rock catch of Pop Unknown, but the last song heads toward the streaming, dreaming soul of what used to be Mineral with soaring beauty and melodic ache. Both clean and beautiful, creaming and scratched, it fills you, ocean wide." - Big Takeover

"What's that old adage? From a small seed grow tall trees or something? Well, that could easily be applied to Imbroco's songs on Are You My Lionkiller? They usually start off small, quiet, introspective - like Holy Rollers or Elliot even - before they start to grow. They grow beyond all proportion until they have a sound that a juggernaut could pass through, with room to spare. The quality tunesmithery should come as no surprise though, bearing in mind they include two members of Pop Unknown, two members of the brilliant Mineral and the vocalist from The Impossibles. Hearing Imbroco in full flow is really an uplifting awe-inspiring sound and that's not to mention the way they can suddenly call a halt to that and reduce things to a subtle jangling guitar and fragile vocal. Another winner from the continually impressive Deep Elm roster." - Scanner