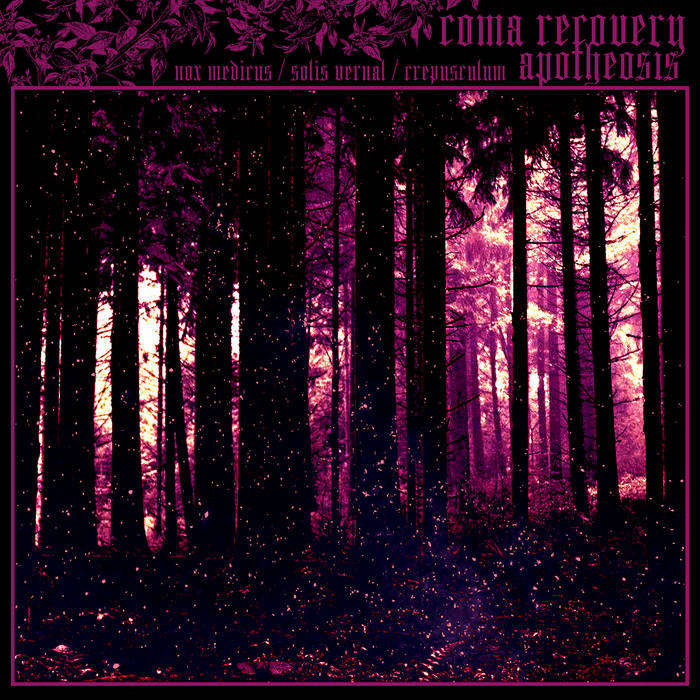 Apotheosis, the new mini album from southwest desert downtuners, COMA RECOVERY, is an uplifting and refreshingly pop-sensible collaboration of heavy, noisy metal and daydreamy synth wave via the 1987 playbook of Depeche Mode or Tears for Fears. Twinkly leads and airy pads merge with baritone-esque guitar and bass tones to engulf the listener in an entirely new realm of progressive soundscape. Complex, skillful songcraft, digestible structure and rhythm lead the listener effortlessly through each clever composition on Apotheosis. The opening track, Nox Medicus (Night Medicine), is a hypnotic galloping drive through the full moon desert dreamscape. Syncopated and relentless, the percussive movement of the bassey backbone moves smoothly through dreamy choruses, soaring vocal lines and climactic bridges into familiar and infectious melodies. An epic departure in beats per minute, Solis Vernal (Spring Sun) crashes down on the intentional monotony of Nox to carry the listener atop waves of stoner metal groove into big overwhelming choruses and sparkly analog synth lines. The third and final track, Crepusculum (Twilight), seems to find a nice middle ground of pace and thoroughly burrows its united big riff into the psyche of the listener to journey through verses, bridges and a big towering lead driven chorus rivaling the works of A Perfect Circle or Failure. Apotheosis is the perfect marriage of heavy indie metal and dreamy 80’s new wave. Yes, this is what the next frontier sounds like.

Coma Recovery stand fast behind an unwavering ideology and it pays off remarkably in the best of ways. This is a record that quite astonishingly manages to evoke powerful, dark images while at the same time puncturing them with beams of transcendent, graceful, intoxicating light. You just need to hear it to believe it. "When writing music, I am in the meditative no mind space of creating without any real focus on content. I'm inspired by the full spectrum of existence, anything can become musings for sound. The melodies and progressions seem to develop naturally as if from somewhere outside of me. These songs made sense together, were written in the same time period, and made sense to release as a group. The theme developed more out of personal perspective and, i think, translate the awe i feel at the vastness and order of nature and simultaneously reflect mildly an antagonistic sentiment towards the arrogance that religion often projects towards nature. The art direction and lyrical themes have to do with paganism, solar and lunar/natural cycles, and religious themes being interpreted as cosmological references instead of historical or mythological realities, I don't have any expectations or hopes at what the listener takes away from these songs, that will always be entirely personal and up to the individual. The title of the release, Apotheosis, means to make divine or project divinity on to. In this case, lyrically, divinity is being aimed at the natural cycles of and most fundamental aspects of biological reality. Apotheosis is, at its core, an ode to the observable and knowable reality that makes up our experience as life forms on earth. It is a celebration," says founding member Tommy Morris.

“One of the most stunning records of the year. Comes out of nowhere and knocks you on your ass.” - PunkNews

Coma Recovery is Tommy Morris (guitar, synth), Dustin Casteel (bass, synth) and Travis Wozniak (vocals). Ben Durfee recently joined the band on drums. Apotheosis was recorded at Empty House Studios in Albuquerque with Mathew Tobias and mastered by Doug Van Sloun at Focus Mastering in Omaha. Album art by Daniel Brigman. Band photo by Noel Dalton. Album trailer and promos by John Howe Media. A video for Nox Medicus, shot and edited by Mario Rivera, will also debut on release date 4/20. Previous recordings include Goddverb (2010, Deep Elm Records), Drown That Holy End In Wine (2006) and Man Ascend (2003). The band resides in Albuquerque, New Mexico aka “Tamalewood”, which is known for a lot of things: the city in which tv series Breaking Bad takes place, the crime rate, the international balloon fiesta, a hub on old Route 66, green chiles and bands like The Shins and Beirut.