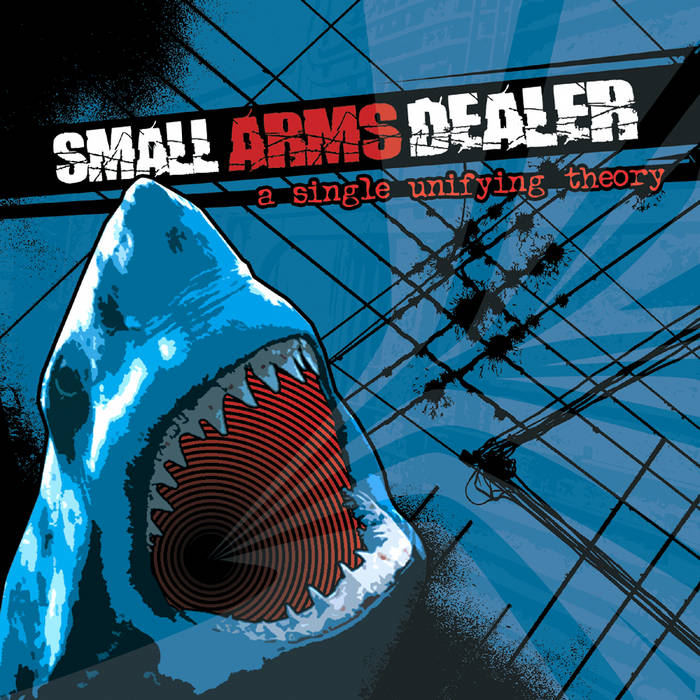 Long Island's Small Arms Dealer (ex-On The Might Of Princes, Contra, Explosivo!) write songs that evoke a metaphorical bloodbath between love, hate, betrayal, passion and sanity...and the spitfire that pours from A Single Unifying Theory does nothing to disprove it. They play with the frenzied desperation of a band with one foot in the grave, and the vitriol that spews from vocalist Jason Lubrano, combined with the guns-blazing, take-no-prisoners attack of the guitars and rhythm section, blows the fucking lid off the proverbial rock n' roll coffin. In the end, A Single Unifying Theory is about crawling through the dirt and double-crosses, believing in yourself and standing by your friends. Small Arms Dealer is ready for a fight and when the smoke clears after these twelve incredible songs, you'll be left with an aching gut, tender ears and one of the most astounding debut records you've ever heard. Recorded by Phil Douglas of Latterman. (DER-451)

"One of the best records that I've heard in the last twelve months...no, scrub that. This is one of the best punk rock records of the last five years. In Small Arms Dealer, Deep Elm have their own Bad Religion, they've discovered their Propaghandi, their Hot Water Music and dare I say it, their own home grown Green Day. Not that Small Arms Dealer sound anything like any of those bands, they don't, but they could easily catapult Deep Elm into the realms occupied by Epitaph, Fat, and beyond. Small Arms Dealer are the perfect amalgamation of Samiam, Understand, Naked Raygun etc., and by amalgamation, I'm not inferring that they're in any way derivative, they're not. They've picked up where those bands left off, upped the power, added more melody and attitude, and in doing so have crafted and released a record that's so powerful it damn near tears your head off. Veering between the heavy on the gas, thrill a minute ride of Tonight, On A Very Special Episode and the future everyman anthem in waiting beauty of My Headlocks Are (Crazy), 'A Single Unifying Theory' is simply a record that you HAVE to hear. Ignore all the bullshit that you're being fed about the next big thing. There's only name you need to remember and that's Small Arms Dealer. If you only buy one record this year, make sure it's 'A Single Unifying Theory'. Seriously." - Mass Movement

"Small Arms Dealer plays straight fucking punk rock with no compromises. A Single Unifying Theory is a kick ass album that you won't regret buying. This music is meant to be played loud, and tunes like Your Sister's A Werewolf and The Small Arms Psalms Dealer Suite are really smart and fast. A Single Unifying Theory is 32 minutes of pure fun, punk and sweat. If you like bands such as Latterman, Smoke Or Fire, Kid Dynamite and Dillinger Four, get this. It will leave you screaming for more!" - Truepunk

"How did you discover your new favorite band? A series of well-orchestrated events? Or did it happen by pure chance? Me? I don't really care. I'm too busy listening to the debut from Small Arms Dealer - my new favorite band. This five-piece has stumbled upon something so rare in today's melodic punk scene: an album that sounds as urgent on the hundredth listen as it did on the first. A Single Unifying Theory just seeps with honesty and integrity; punk rock was meant to sound like it is coming straight from the heart and gut, and here it genuinely does. A lot of listeners will compare this band to Hot Water Music, Latterman or Smoke Or Fire. No one would deny those similarities, but there's something else cooking here. Hardcore that swings? Pure tragedy and triumph? Lyrics that can be screamed along to from top to bottom? Probably all of those things, plus a few more that are intangible and should remain secret just for the mystery of it all. I fucking love this band." - Wonkavision